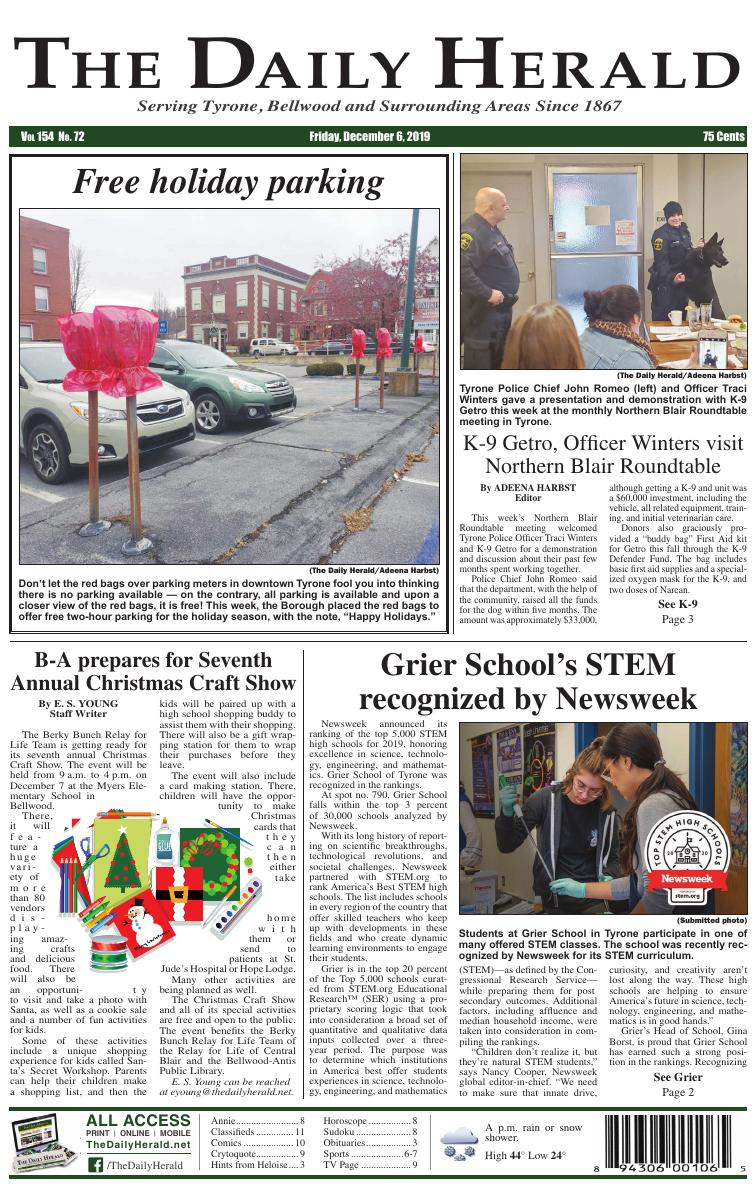 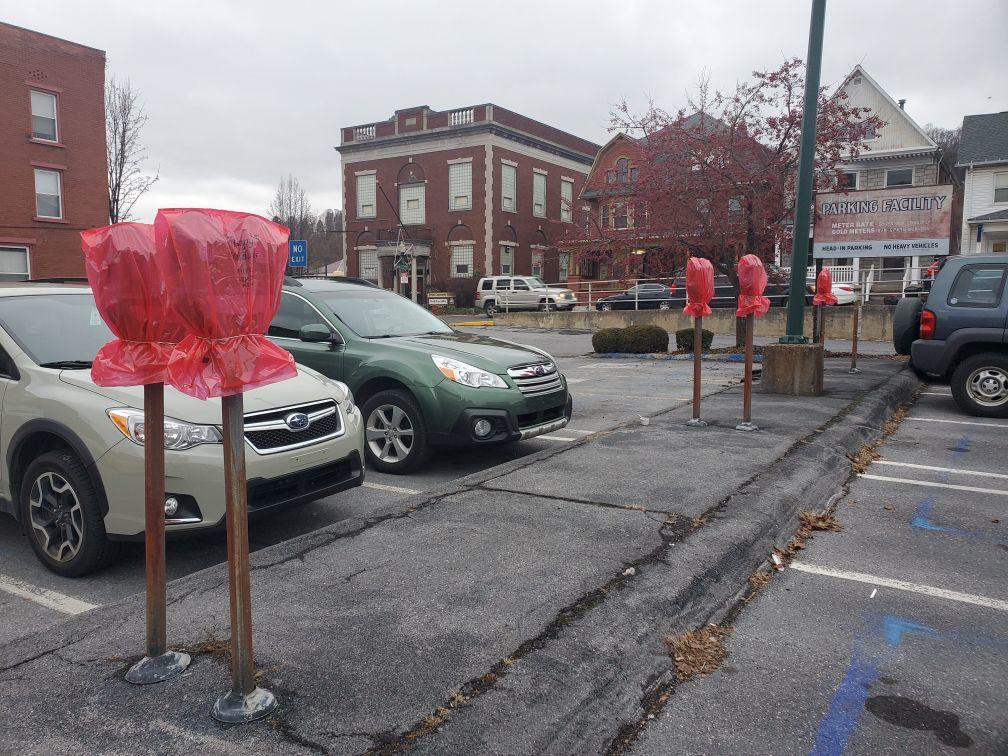 Don’t let the red bags over parking meters in downtown Tyrone fool you into thinking there is no parking available — on the contrary, all parking is available and upon a closer view of the red bags, it is free! This week, the Borough placed the red bags to offer free two-hour parking for the holiday season, with the note, “Happy Holidays.”

Students at Grier School in Tyrone participate in one of many offered STEM classes. The school was recently recognized by Newsweek for its STEM curriculum.

Newsweek announced its ranking of the top 5,000 STEM high schools for 2019, honoring excellence in science, technology, engineering, and mathematics. Grier School of Tyrone was recognized in the rankings.

At spot no. 790, Grier School falls within the top 3 percent of 30,000 schools analyzed by Newsweek.

With its long history of reporting on scientific breakthroughs, technological revolutions, and societal challenges, Newsweek partnered with STEM.org to rank America’s Best STEM high schools. The list includes schools in every region of the country that offer skilled teachers who keep up with developments in these fields and who create dynamic learning environments to engage their students.

Grier is in the top 20 percent of the Top 5,000 schools curated from STEM.org Educational Research™ (SER) using a proprietary scoring logic that took into consideration a broad set of quantitative and qualitative data inputs collected over a three-year period. The purpose was to determine which institutions in America best offer students experiences in science, technology, engineering, and mathematics (STEM)—as defined by the Congressional Research Service—while preparing them for post‐secondary outcomes. Additional factors, including affluence and median household income, were taken into consideration in compiling the rankings.

“Children don’t realize it, but they’re natural STEM students,” says Nancy Cooper, Newsweek global editor-in-chief. “We need to make sure that innate drive, curiosity, and creativity aren’t lost along the way. These high schools are helping to ensure America’s future in science, technology, engineering, and mathematics is in good hands.”

Grier’s Head of School, Gina Borst, is proud that Grier School has earned such a strong position in the rankings. Recognizing the importance of STEM in preparing students for the future job market, Grier developed an IT corridor in 2018 and an AV recording studio in 2015.

Grier School offers abundant courses in STEM topics, including Robotics, Computer Programming, several course options in Science and Math, and an impressive 10 AP courses in STEM disciplines. With female teachers leading every STEM discipline, girls at Grier have strong role models and can see themselves in STEM careers. It has been indicated that females who attend all-girls schools are six times more likely to consider majoring in a STEM field in college than girls in co-ed institutions.

The Berky Bunch Relay for Life Team is getting ready for its seventh annual Christmas Craft Show. The event will be held from 9 a.m. to 4 p.m. on December 7 at the Myers Elementary School in Bellwood.

There, it will feature a huge variety of more than 80 vendors displaying amazing crafts and delicious food. There will also be an opportunity to visit and take a photo with Santa, as well as a cookie sale and a number of fun activities for kids.

Some of these activities include a unique shopping experience for kids called Santa’s Secret Workshop. Parents can help their children make a shopping list, and then the kids will be paired up with a high school shopping buddy to assist them with their shopping. There will also be a gift wrapping station for them to wrap their purchases before they leave.

The event will also include a card making station. There, children will have the opportunity to make Christmas cards that they can then either take home with them or send to patients at St. Jude’s Hospital or Hope Lodge.

Many other activities are being planned as well.

The Christmas Craft Show and all of its special activities are free and open to the public. The event benefits the Berky Bunch Relay for Life Team of the Relay for Life of Central Blair and the Bellwood-Antis Public Library.

This week’s Northern Blair Roundtable meeting welcomed Tyrone Police Officer Traci Winters and K-9 Getro for a demonstration and discussion about their past few months spent working together.

Police Chief John Romeo said that the department, with the help of the community, raised all the funds for the dog within five months. The amount was approximately $33,000, although getting a K-9 and unit was a $60,000 investment, including the vehicle, all related equipment, training, and initial veterinarian care.

Donors also graciously provided a “buddy bag” First Aid kit for Getro this fall through the K-9 Defender Fund. The bag includes basic first aid supplies and a specialized oxygen mask for the K-9, and two doses of Narcan.

Chief Romeo shared at the Roundtable meeting that it is believed that Officer Winters is the first female K-9 officer in Blair County. She attended an initial six-week training, but also trains twice a month locally.

Getro is trained to detect narcotics like marijuana, heroin, cocaine, and methamphetamine, and is working on detecting ecstasy. He also trains to track ground disturbance odor, which can help find suspects in certain cases. He can understand tones of voice and direct commands, some of which he has learned in German, English, and Czechoslovakian.

“It’s pretty cool,” said Officer Winters. “There is so much more involved than I ever thought would be.”

Getro has already helped in many cases, including two trespasses/burglaries in abandoned houses, and the seizure of drugs several times. He can assist in the apprehension of criminal suspects as well.

“He doesn’t have to just bite somebody,” explained Officer Winters. “There are other things you can use the dog for — his mere presence, people see the car and a lot of people have straightened up. His presence and his bark have made people think twice.”

“But you’d rather get punched in the nose than get bit by a dog,” advised Chief Romeo.

On August 3, full-blooded German Shepherd Getro, who is almost 18 months old, became active with the Tyrone Police Department. He had been certified in two types of training before he came to the United States from the Czech Republic. Nearly all police dogs come to the U.S. from overseas, noted Chief Romeo.

Officer Winters enjoys her role with Getro and recognizes his importance as a trained K-9, and tries to protect him from anything that could be harmful at home or on the job. She demonstrated with him finding marijuana during the Roundtable meeting, explaining the process to approximately 10 people in attendance.

“Having a K-9 is a benefit to law enforcement and the community,” said Sue Griep, chairperson of the Roundtable. “To have one in our community is such a benefit and has already helped.” 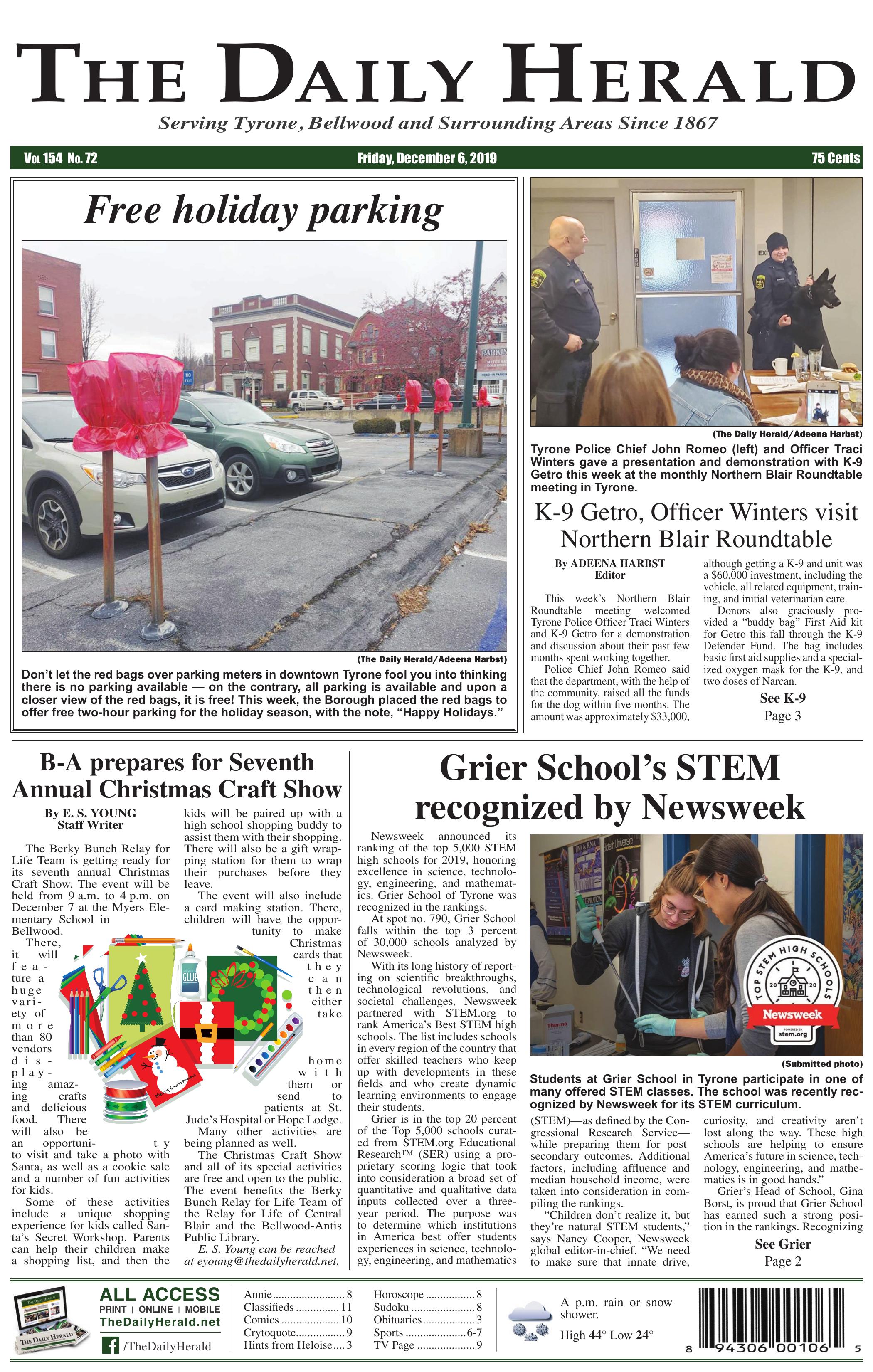