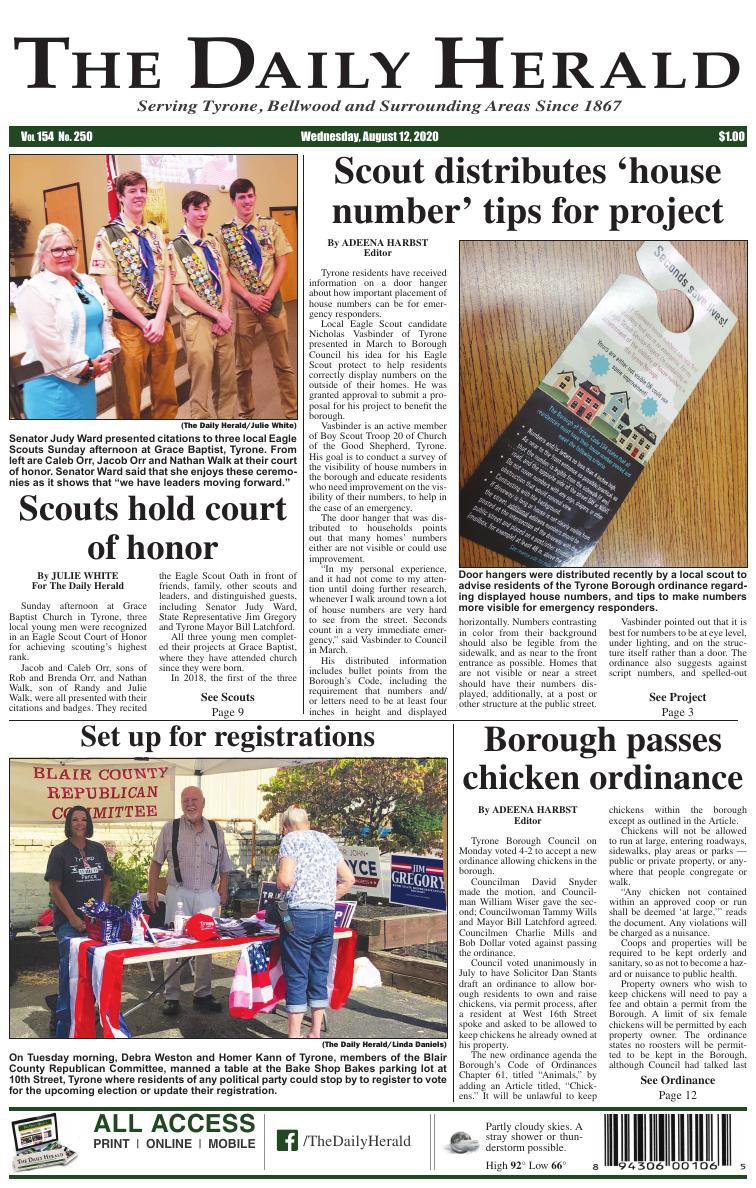 Door hangers were distributed recently by a local scout to advise residents of the Tyrone Borough ordinance regarding displayed house numbers, and tips to make numbers more visible for emergency responders.

Tyrone residents have received information on a door hanger about how important placement of house numbers can be for emergency responders.

Local Eagle Scout candidate Nicholas Vasbinder of Tyrone presented in March to Borough Council his idea for his Eagle Scout protect to help residents correctly display numbers on the outside of their homes. He was granted approval to submit a proposal for his project to benefit the borough.

Vasbinder is an active member of Boy Scout Troop 20 of Church of the Good Shepherd, Tyrone. His goal is to conduct a survey of the visibility of house numbers in the borough and educate residents who need improvement on the visibility of their numbers, to help in the case of an emergency.

The door hanger that was distributed to households points out that many homes’ numbers either are not visible or could use improvement.

“In my personal experience, and it had not come to my attention until doing further research, whenever I walk around town a lot of house numbers are very hard to see from the street. Seconds count in a very immediate emergency,” said Vasbinder to Council in March.

His distributed information includes bullet points from the Borough’s Code, including the requirement that numbers and/or letters need to be at least four inches in height and displayed horizontally. Numbers contrasting in color from their background should also be legible from the sidewalk, and as near to the front entrance as possible. Homes that are not visible or near a street should have their numbers displayed, additionally, at a post or other structure at the public street.

Vasbinder pointed out that it is best for numbers to be at eye level, under lighting, and on the structure itself rather than a door. The ordinance also suggests against script numbers, and spelled-out number as they can be difficult to read quickly.

As part of his project, Vasbinder is encouraging residents to consider updating their house numbers if they are not as visible as possible, and, even if they meet the Borough Code, to “make them better.”

“If you can’t easily see them, first responders won’t be able to either,” he said.

“I’m taking into consideration that I am not trying to enforce the law, I’m just trying to give information of it,” said Vasbinder. He believes this project could have a large impact.

“You can protect your family and your property by having a large physical house number that can be seen from the street,” he said. “Firefighters, police officers, and paramedics will be able to find you faster incase of a serious emergency.” 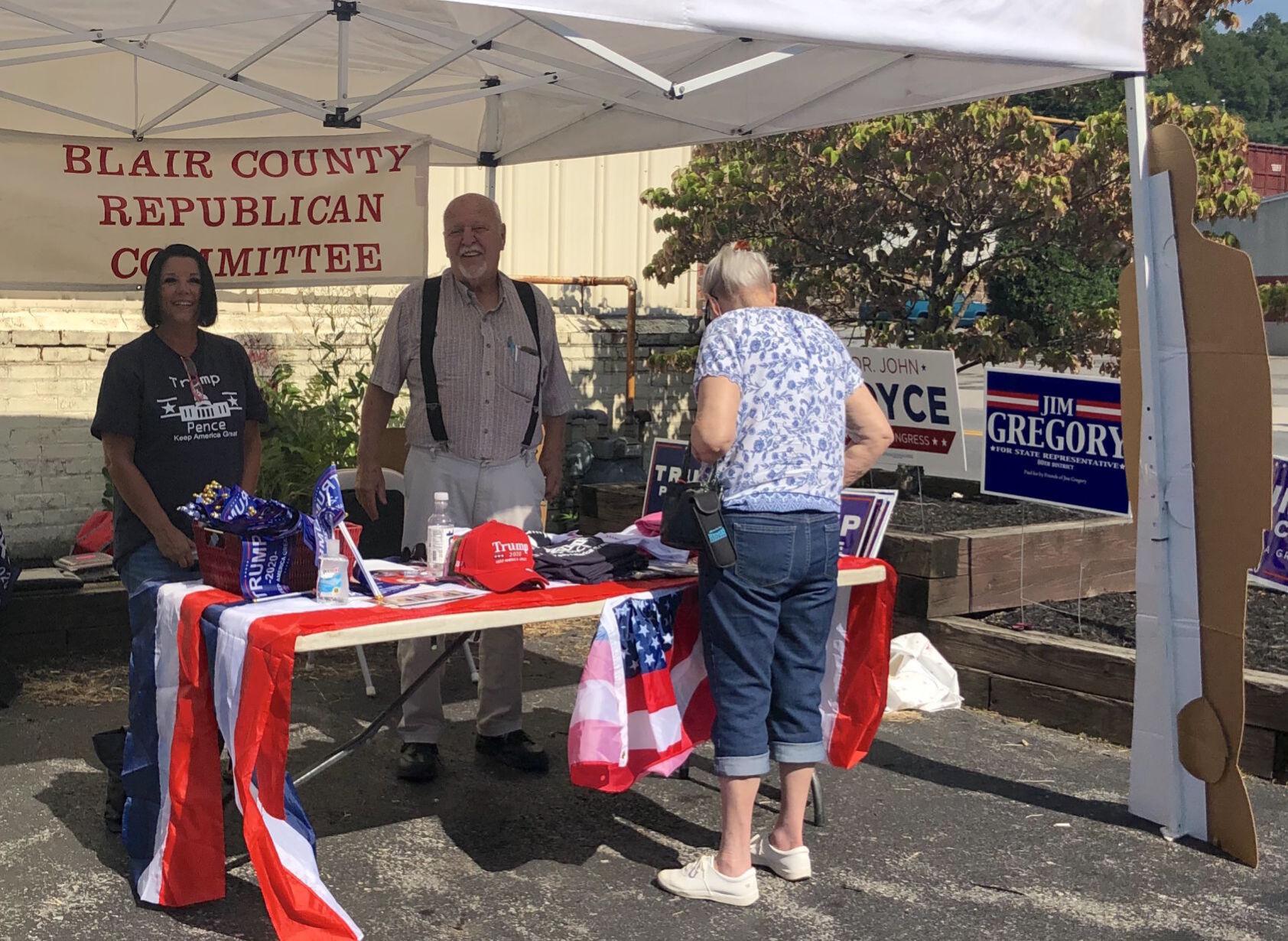 On Tuesday morning, Debra Weston and Homer Kann of Tyrone, members of the Blair County Republican Committee, manned a table at the Bake Shop Bakes parking lot at 10th Street, Tyrone where residents of any political party could stop by to register to vote for the upcoming election or update their registration.

Senator Judy Ward presented citations to three local Eagle Scouts Sunday afternoon at Grace Baptist, Tyrone. From left are Caleb Orr, Jacob Orr and Nathan Walk at their court of honor. Senator Ward said that she enjoys these ceremonies as it shows that “we have leaders moving forward.”

Nathan Walk adds a verse to the foyer at Grace Baptist as a part of his project.

This early photo shows Caleb Orr (right) working on the patio, part of a new outdoor worship area he completed at Grace Baptist.

Jacob Orr (seated) poses with many who helped during his project, building benches for the front of the church and for an outdoor worship area at Grace Baptist.

Jacob and Caleb Orr, sons of Rob and Brenda Orr, and Nathan Walk, son of Randy and Julie Walk, were all presented with their citations and badges. They recited the Eagle Scout Oath in front of friends, family, other scouts and leaders, and distinguished guests, including Senator Judy Ward, State Representative Jim Gregory and Tyrone Mayor Bill Latchford.

All three young men completed their projects at Grace Baptist, where they have attended church since they were born.

In 2018, the first of the three projects was completed by Jacob Orr. Orr built benches for the front of the church and for a planned outdoor worship area that his brother Caleb, would later complete for his own project.

Orr said, “Our church was in need of benches out front. People needed a place to sit and wait to be picked up after services. Plus, we constructed five benches which I knew would work well with the project that my younger brother was about to start--an outdoor worship area.”

Orr said that while the fundraising was difficult, the church helped with donations and purchasing Gardner’s peanut butter pretzel rods. “I also got some nice contributions from local businesses,” he said.

Nathan Walk then began his project in January 2019. Walk said he was having some trouble deciding on a project when, “I noticed that the walls in my church were damaged, so I decided that I wanted to help the church out.” He repaired and painted the walls in the foyer and one of the hallways.

The project, at two full months, took longer than Walk anticipated. “The hardest part was spending basically all of my free time working on my project,” Walk said. He spent many evenings, weekends and snow days working at the church.

Thanks to generous contributions from businesses, individuals, and fundraisers, enough money was left over from donations that Walk was able to add a large decal to the foyer: Psalm 122:1, “I was glad when they said to me, ‘Let us go to the house of the Lord!’”

Caleb Orr then began his project in August of 2019, adding an outdoor worship area in the rear of the church, which includes the five benches his brother made, a fire pit, and stone patio. “I chose my scout project because I thought it would be nice to have an outdoor worship area. I envisioned singing praise and worship songs around a fire and a different atmosphere to have youth group from time to time — and mountain pies and s’mores, of course,” he said.

“The most rewarding part was seeing the project come together and getting to work with some wonderful people who sacrificed their time and talents to help me accomplish my goal,” Orr added. His project is being put to good use and his visions of people sitting around the fire pit and enjoying the worship area have become a reality.

At the court of honor, Grace Baptist Lead Pastor Aaron Jeffery quoted the Boy Scouts founder, who said that scouts should first love and serve God and second, love and serve their neighbors.

“Today we have come together to applaud these young men,” Jeffery said, “who have attained not only the highest rank in scouts, they have also demonstrated first rate character. Jacob, Caleb and Nathan, well done, and congratulations.”

Tyrone Borough Council on Monday voted 4-2 to accept a new ordinance allowing chickens in the borough.

Council voted unanimously in July to have Solicitor Dan Stants draft an ordinance to allow borough residents to own and raise chickens, via permit process, after a resident at West 16th Street spoke and asked to be allowed to keep chickens he already owned at his property.

The new ordinance amends the Borough’s Code of Ordinances Chapter 61, titled “Animals,” by adding an Article titled, “Chickens.” It will be unlawful to keep chickens within the borough except as outlined in the Article.

Chickens will not be allowed to run at large, entering roadways, sidewalks, play areas or parks — public or private property, or anywhere that people congregate or walk.

“Any chicken not contained within an approved coop or run shall be deemed ‘at large,’” reads the document. Any violations will be charged as a nuisance.

Coops and properties will be required to be kept orderly and sanitary, so as not to become a hazard or nuisance to public health.

Details for the ordinance were determined following discussion by Council in July. A Lincoln Avenue resident spoke up in agreement with allowing chickens, and Mayor Latchford said he had previously had the same matter brought to him. He commented that chickens keep yards clean from ticks and other pests.

Councilman Ken Patterson, who was absent from Monday’s meeting, said in July that his family would like to own chickens, but his concern was in what the decision “could turn into.” He proposed the permit process to help keep a handle on enforcement.

“I like farms a lot, so I have no qualms with this,” said Mayor Latchford last month. “I think if we permit it and have regulations set up — this is the only farm animal I can think of that could be inside a community.”

With the passing of the ordinance this week, it takes effect immediately. Questions can be directed to the Borough office at 814-684-1330. Borough Council meets the second Monday of each month at 7 p.m. at the Borough Building, Logan Avenue. 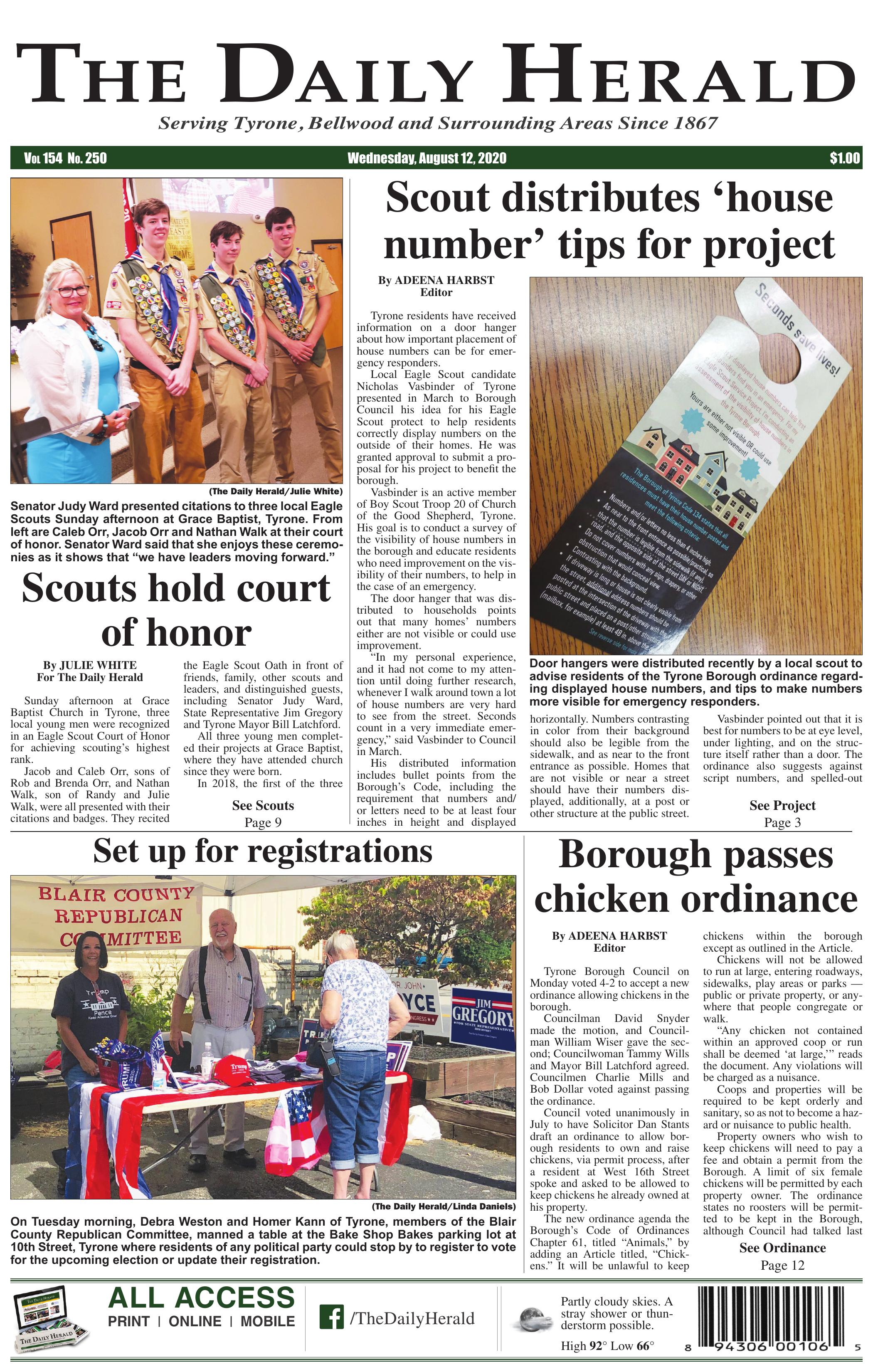