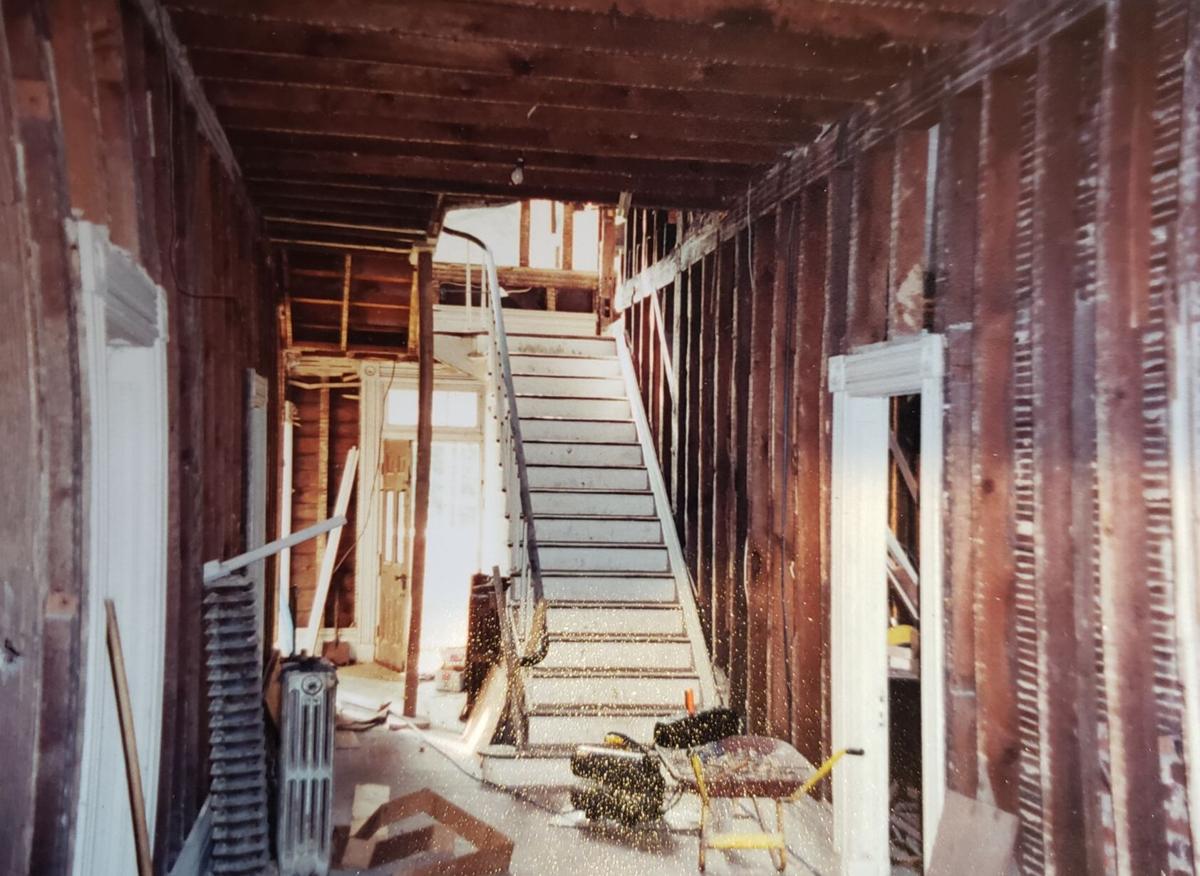 The staircase on the first floor of Forest Manor, formerly the Lowrie Mansion, before restoration. 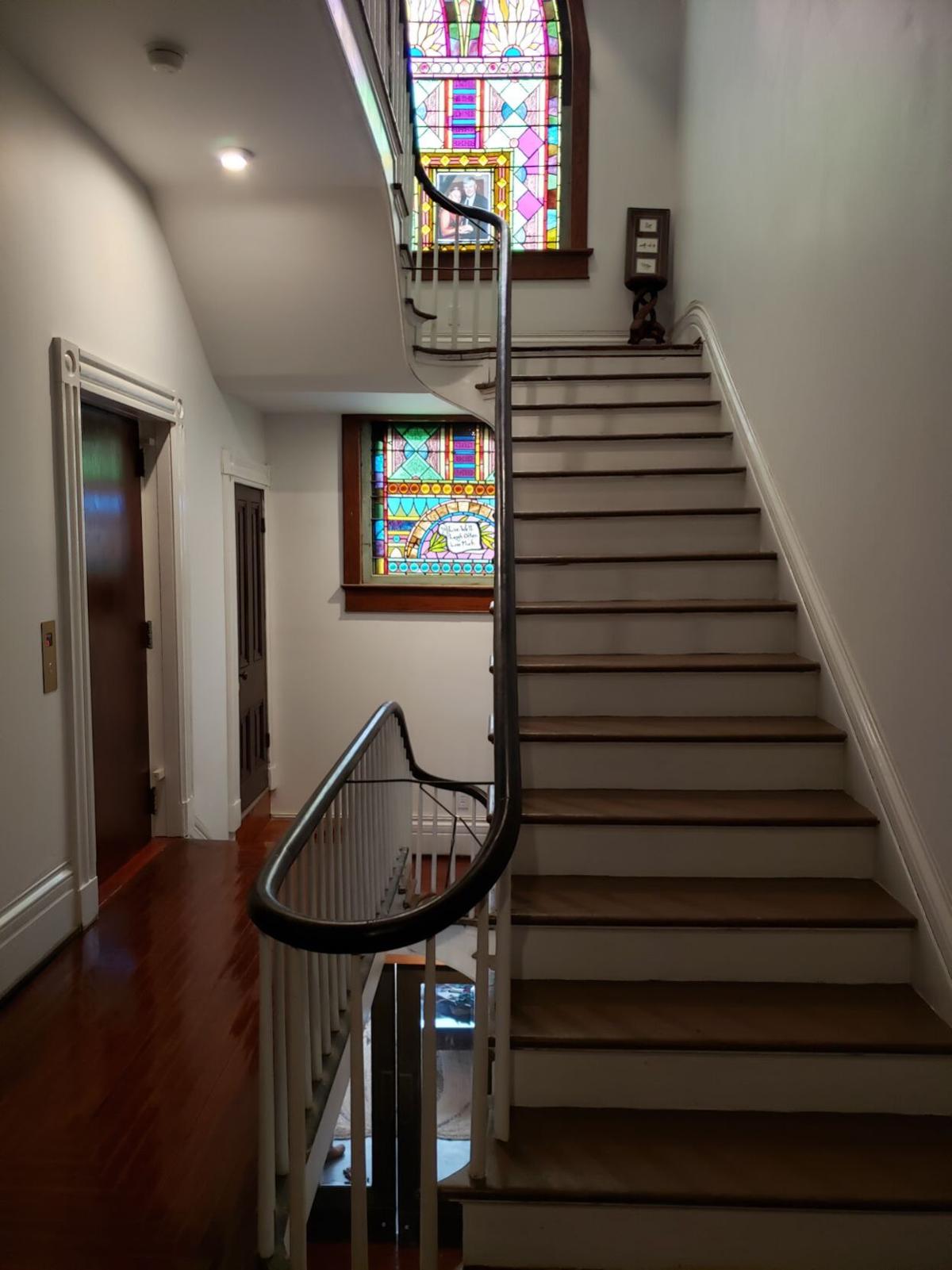 Pictured after restoration is a view of the same staircase from the second floor at Forest Manor in Warriors Mark. 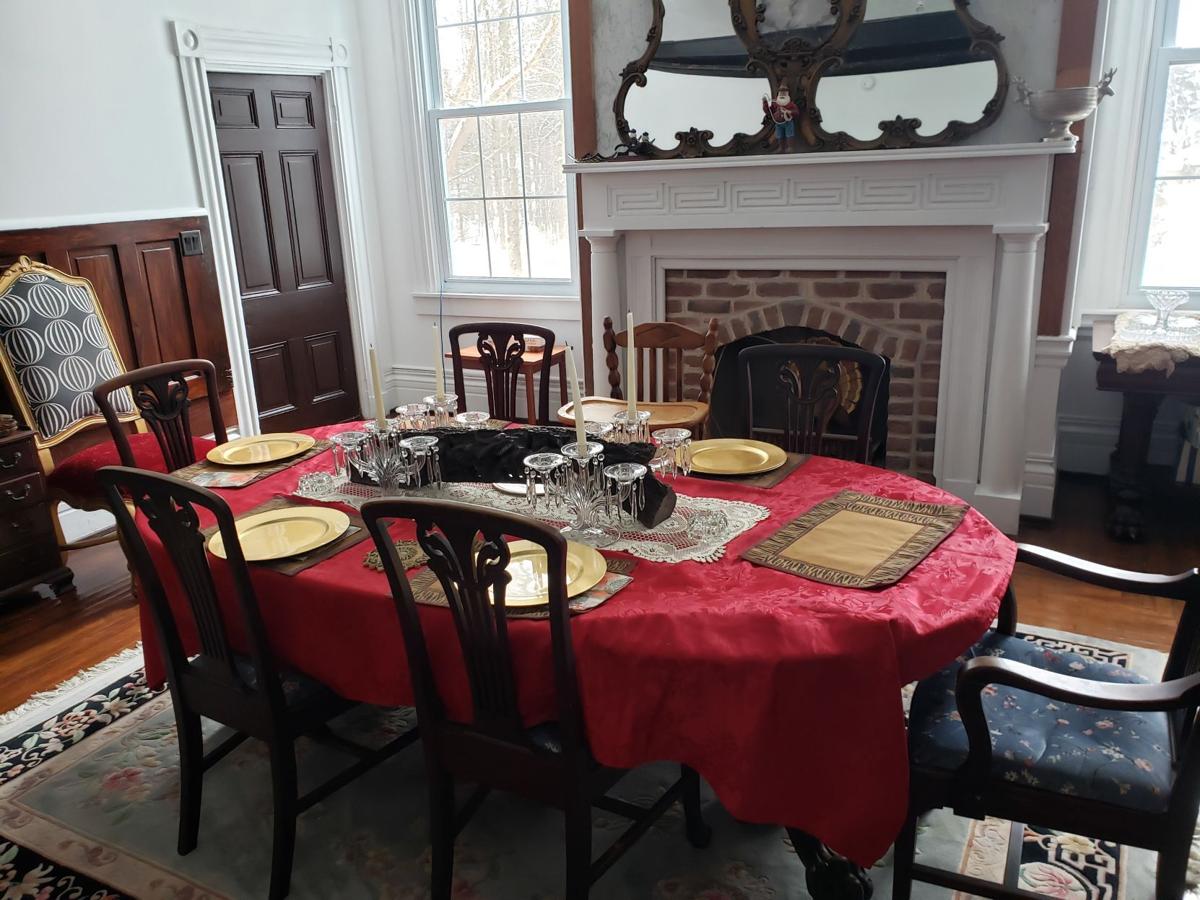 The original dining room suit from the Lowrie Mansion has been returned and is in beautiful condition in the refurbished dining room at Forest Manor. In the background is one of the 10 fireplaces inside the estate as well as a repurposed door (left) used as wainscoting.

The staircase on the first floor of Forest Manor, formerly the Lowrie Mansion, before restoration.

Pictured after restoration is a view of the same staircase from the second floor at Forest Manor in Warriors Mark.

The original dining room suit from the Lowrie Mansion has been returned and is in beautiful condition in the refurbished dining room at Forest Manor. In the background is one of the 10 fireplaces inside the estate as well as a repurposed door (left) used as wainscoting.

Long ago, in the time of the Iron Furnace Baronies of Huntingdon County, a mansion was constructed in Warriors Mark. The Lowrie Mansion, now known as Forest Manor, stands along Centre Line Road.

Originally built in the 1840s by Anthony Shorb, the 19-room home was one of four iron master’s mansions built in the area. Lyon, Shorb and Company became the largest iron manufacturing firm in the nation.

The mansion was sold to one of the firm’s attorneys, J. R. Lowrie in 1854. Lowrie was the paymaster for the iron company, and the mansion remained in the Lowrie family until 1925. At that time, it went by public sale to Howard and Lititia (Hurley) Fleck. Howard Fleck was a buyer for Gable’s Department Store in Altoona. The Flecks renamed the mansion Forest Manor.

The estate was sold again in 1956 to Dr. William and Mary (Julius) Martin. Dr. Martin was a professor of economics at Penn State until his sudden death in 1960. He left behind his wife and five daughters, who kept the home in the family until 1990, when it was sold to John and Karen Gilliland of Warriors Mark.

The property has been in the Gilliland family now for 30 years, and the Gillilands have been in the process of restoring the home, making it livable again — which has been no small task. Among the long list of projects have been a new roof, new walls, painting, the installation of more bathrooms (the home reportedly had the first indoor bathroom in Warriors Mark), updated plumbing and electrical, a new kitchen, walls, wainscoting and trim, digging down for a deeper, finished basement (it had been a dirt floor with a low ceiling), a handicap accessible ramp into the basement, and even an elevator with access from to all three floors above.

The timeframe started with the purchase 30 years ago. A new roof was installed 28 years ago, and the Gillilands have done a little work on their long term project each year since. Steel beams and supports were placed in the basement, after 46 dump truck loads of soil were removed. In 1999, the house was gutted and the final push to complete restoration began in 2018. The Gilliland family enjoyed their first Christmas in Forest Manor in 2019.

A tour through the home by John Gilliland reveals many historic elements. Gilliland has been preserving as much of the history as he can during the restoration. In the basement is a document burner, the predecessor to a paper shredder. A ride in the elevator reveals heavy wooden beams, secured with wooden pegs in the original construction. There is a place where some of the horsehair plaster was framed for view. The hardwood floors were preserved, along with a winding set of staircases throughout the center of the mansion. There is also an original interior staircase from the basement that went all the way to what, at the time, were servants’ quarters. That room, once with low ceilings, had the capacity of sleeping about a dozen people in a row under the eaves. The mansion had hired servants, but never slaves, Gilliland said.

However, when digging down for the elevator shaft years ago, Gilliland spotted what looked like a coal tunnel, with braced wood that ran from the mansion to where, at one time, was the barn on the property. He now wishes he had taken a picture of it. While the mansion in Warriors Mark is not listed as a stop on the Underground Railroad, it is certainly possible that it was used as a haven, as the mansion stood through the time of the Civil War and stops fluctuated.

The home is filled with fireplaces, 10 in all, Gilliland said. There is also a large safe, with two-foot thick walls, floor and ceiling of brick and iron, originally built to store valuable documents from the iron company. Now, the safe is empty and sealed, to prevent anyone from getting stuck inside, Gilliland said.

Wooden planking has been installed throughout the bedrooms, covering the walls in rooms now known as “the cherry room,” “the ash room,” and so on. Much of the work has been done by Amish workmen of Sinking Valley, Gilliland said.

Many of the elements added to the mansion were repurposed, such as marble countertops from remodeled bathrooms at Penn State, doors from a department store being used as wainscoting, flooring from a former bank used throughout the bathrooms, and a large stained glass window that can be viewed from the staircases. Many of the furnishings in the home were found by Gilliland family members through sales and auctions.

Among the improvements made by the Gillilands is a large sunroom to enjoy the many beautiful trees and plants growing outside. Lowrie had a great interest in botany.

Though much has been done, there is still more work to do. At some point, Forest Manor could easily be converted to a bed and breakfast or a small hotel, but for now, the Gillilands are enjoying the process and the uncovering the history the mansion holds.

Julie White can be reached at jwhite@thedailyherald.net.