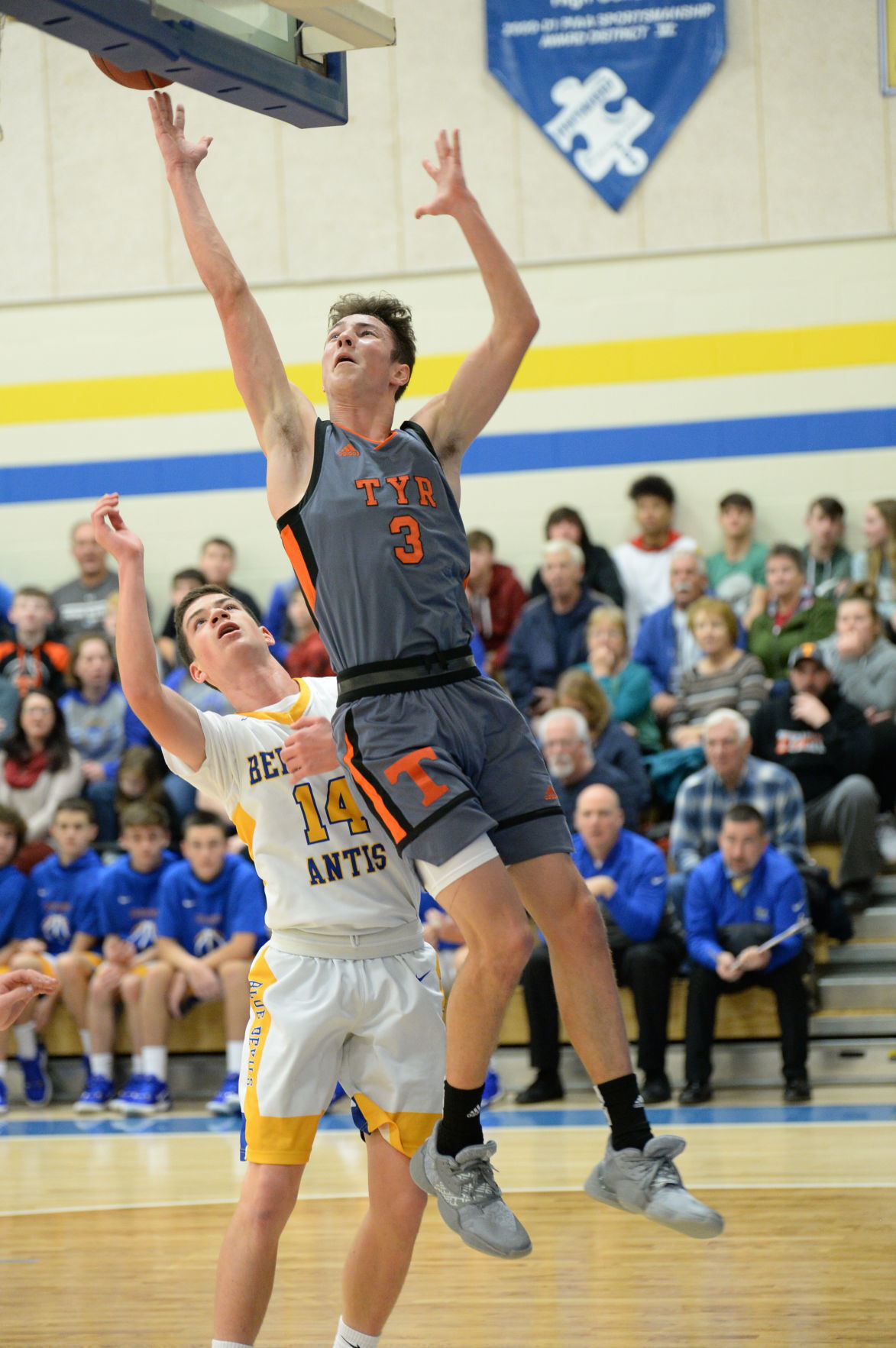 Tyrone’s Damon Gripp (3) goes up for a layin as Bellwood-Antis’ Sean Mallon (14) defends the play. Gripp had 23 points to lead the Golden Eagles past the Blue Devils, 79-32. 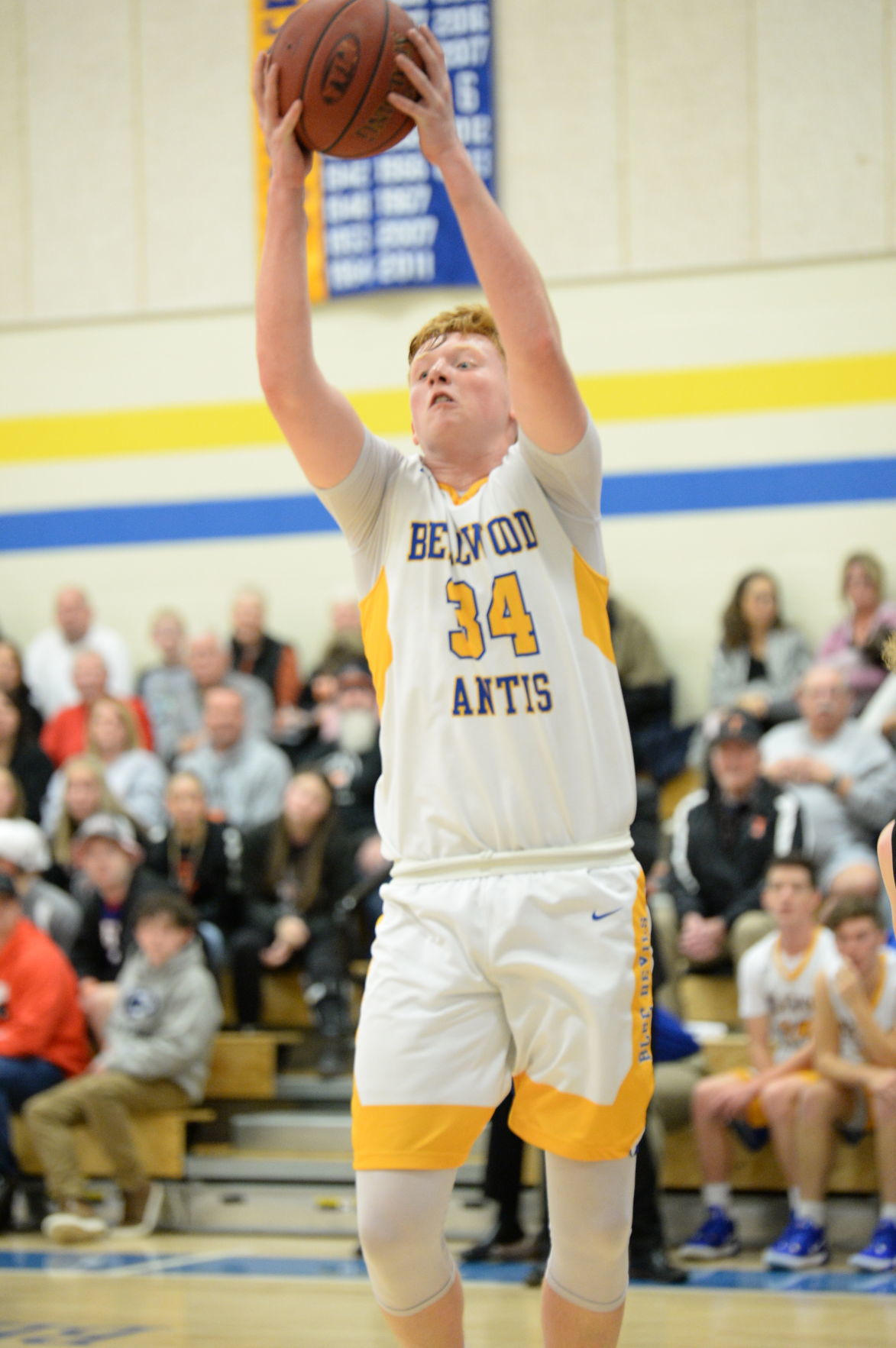 Tyrone’s Damon Gripp (3) goes up for a layin as Bellwood-Antis’ Sean Mallon (14) defends the play. Gripp had 23 points to lead the Golden Eagles past the Blue Devils, 79-32.

The Golden Eagles won by margins of 45 and 50 points in the two teams’ meetings last season, and after Friday’s game Tyrone has now won the last five against the Blue Devils.

This one on Friday evening was more of the same old song and dance from last year, although the start was much more entertaining. Tyrone had a 23-21 lead halfway through the second quarter, but the Golden Eagles went on a 43-0 run from there as Tyrone went back up Route 220 with a 79-32 win.

The Blue Devils were wore down by Tyrone’s defense in that staggering 43-0 run as Bellwood was held without a field goal for over 10 minutes of game time.

“We preached defense,” said Tyrone head coach George Gripp. “We knew we had to pick our defense up. Everybody was tight. We thought our defense could get us easy buckets on the offensive end. The guys stayed together and that’s what happened.”

For Bellwood in head coach Pat Cassidy’s debut, his team had a lead on two separate occasions in the first quarter before Tyrone took a 15-12 lead that they never gave up.

They hung with the Golden Eagles through about 12 minutes of play at 23-21, but nothing went the Blue Devils’ way for the next four minutes as Tyrone made it a 26-point game at halftime.

“The wheels fell off,” said Cassidy. “It’s discouraging because our guys were playing so great. I thought that first quarter and a half, we really got to see what this team’s potential is. They set the ceiling high for themselves tonight with that first quarter and a half. The challenge is now, ‘Can we sustain that?’ That’s what we have to work on.”

Bellwood jumped out to a 4-0 lead after a pair of Zach Miller free throws and a layin from Trenton Pellegrino. Tyrone’s Brandon Lucas got his team their first points on a pair of free throws.

Zach Mallon’s three-pointer later in the quarter put the Blue Devils up 12-10, but a Damon Gripp bucket followed by a trey from Lucas put the Eagles up for good at 15-12.

Bellwood still stayed close through the first few minutes of the second quarter, thanks in part to a big three-pointer from Troy Walker.

Trevor Miller’s bucket made it 23-21, but Bellwood didn’t score again until the final minute of the third quarter.

“We should have been playing like that to start the game,” said Coach Gripp. “They came out and made some shots to their credit. We never thought in a million years they’d come out and play us man. That threw us off, but that should benefit us. We love when teams play us man and press us. We feel with our overall athleticism and team speed, we can get up and down the floor with the best of them.”

“That first half we had 19 turnovers and a lot of those turnovers came in the last four minutes of the second quarter,” said Cassidy. “You have to give a lot of credit to Tyrone. Relentless pressure like that eventually gets to you. We have to take a page from their book. That’s the type of defense we want to play. We’re very capable of it.”

Bellwood’s Sean Mallon broke the run with a pair of free throws with 46 seconds left in the third and followed that up with another bucket to end the third quarter, but by that point, the Mercy Rule clock was in effect as Tyrone took a 66-25 lead to the fourth quarter.

Gripp led Tyrone with 23 points, while Lucas was right behind him with 21. Landen DeHaas added 18 more.

“Overall other than the start, I thought it was good we got our first game jitters out, and I thought our guys played pretty well,” Coach Gripp said.

Zach Mallon had nine to pace Bellwood, while Walker put in eight points.

“I think the most important thing tonight is they felt how good they can be,” said Cassidy. “They know how difficult it is to sustain that level of play. I’m very proud of the effort. It’s tough like that when you get down, but I thought our guys showed some fight.”

Both teams are on the road in their next games. Tyrone visits Bellefonte on Tuesday, while Bellwood-Antis travels to West Branch on Monday.