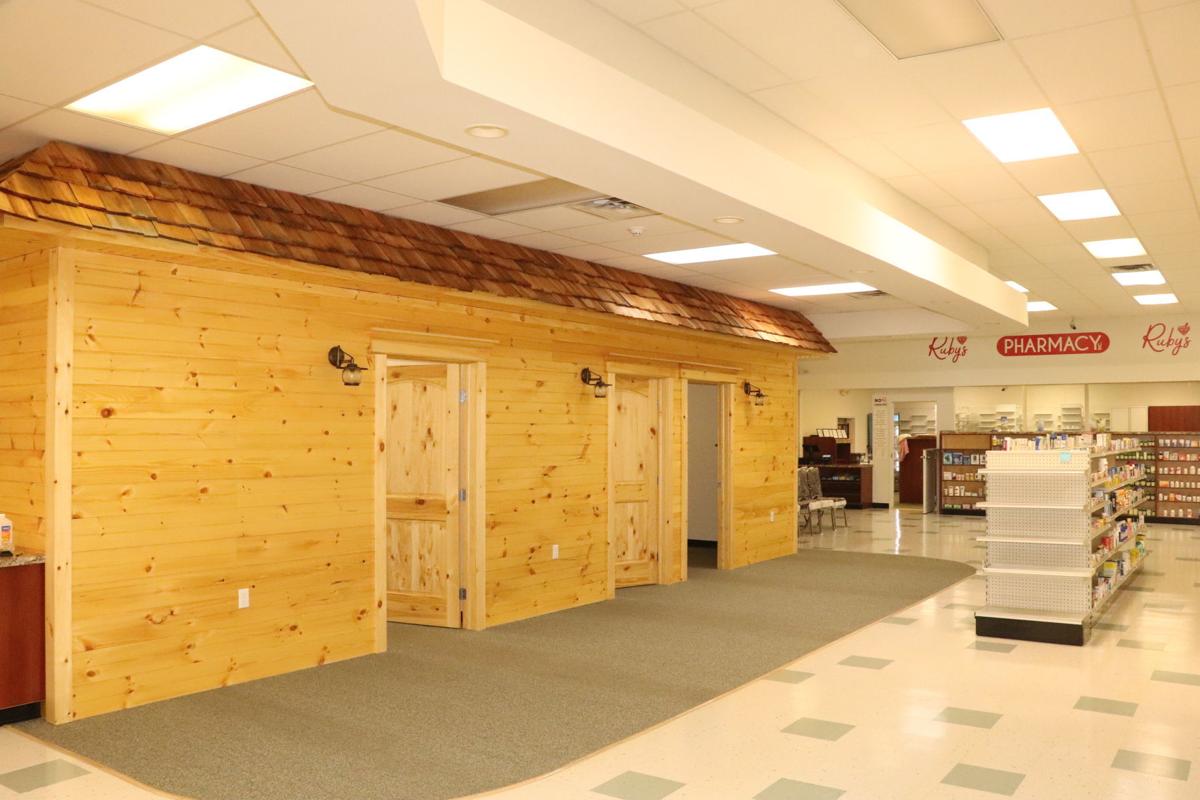 During the past two months, Saxton Market shoppers have witnessed a flurry of activity in the building next door. Ruby Pharmacy will open its doors Monday, Sept. 23. 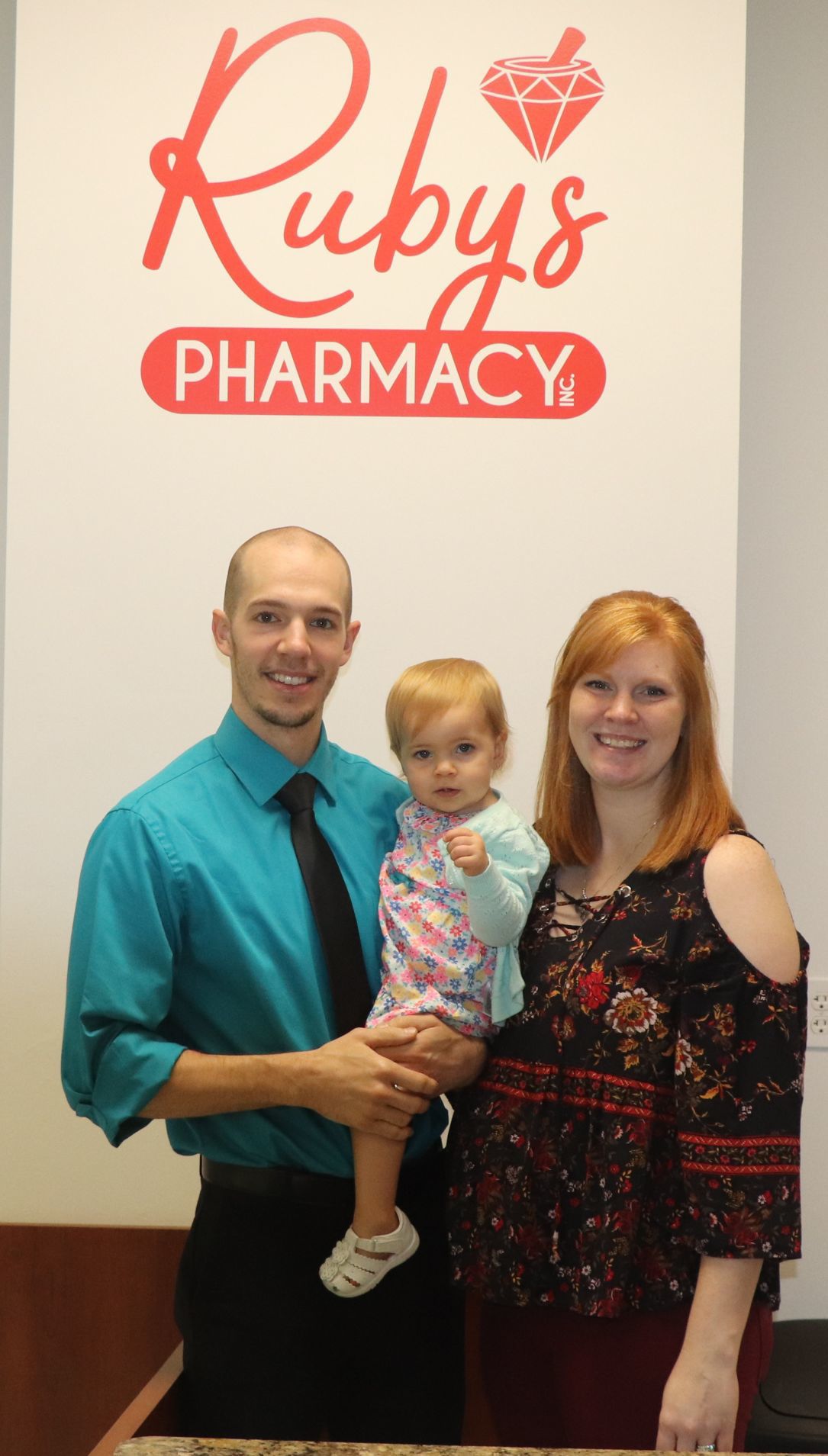 Tyler and Courtney Ruby, along with their 18-month-old daughter Elizabeth, stand inside their new pharmacy that will soon be opening at 509 Main St. in Saxton Borough next to the Saxton Market. The pharmacy is scheduled to open Monday, Sept. 23.

During the past two months, Saxton Market shoppers have witnessed a flurry of activity in the building next door. Ruby Pharmacy will open its doors Monday, Sept. 23.

Tyler and Courtney Ruby, along with their 18-month-old daughter Elizabeth, stand inside their new pharmacy that will soon be opening at 509 Main St. in Saxton Borough next to the Saxton Market. The pharmacy is scheduled to open Monday, Sept. 23.

During the past two months, Saxton Market shoppers have witnessed a flurry of activity in the building next door to the market that formerly housed the Saxton Station Pharmacy. Many have wondered what type of business was going to locate there.

Many were happy to learn that another pharmacy, Ruby’s Pharmacy, was planning to open its doors in the complex. The new business is set to officially open its doors Monday, Sept. 23.

Pharmacy owner Tyler Ruby, wife Courtney and 18-month old daughter Elizabeth sat down with The Daily News recently to talk about their new business venture. Tyler saw an opportunity to open a new business in Saxton when the former Saxton Station Pharmacy permanently closed its doors in February.

A 2008 Everett High School graduate, Tyler later went on to graduate with a doctorate in pharmacy from Duquesne University in 2014. He later went on to work and gain experience in several local pharmacies including the Saxton Station, McCahan’s, Everett, Northern Bedford and Ickes pharmacies.

Ruby said it is a blessing for him to have gained experience working in different locations with other pharmacists to see what works well and what doesn’t. Of course Ruby is no novice in the pharmacy field himself, being owner-operator of the Orbisonia Pharmacy since May 2017.

When asked why he chose to open a business in Saxton, Ruby said Saxton is close to home and he filled in for other pharmacists and likes the area and its people. He also feels there is room in the community for two pharmacies again and plans on offering services others do not.

For example, Ruby plans to offer clinical rooms for private patient counseling, immunizations, telemedicine and point of care testing. He is certified to offer many of these services that he said will be new to his customers.

In one patient care room, he said pharmacy patients will have the opportunity to actually speak to a physician real time via a computer and possibly have their pharmacy needs met in one setting. “Our goal is to create a one stop, one shop atmosphere to not take the place of a physician but limit the number of visits by meeting our customers needs in house,” he said.

The business will also be offering shots for shingles. Shots not only to help the patient while they have them but also help prevent future outbreaks and their severity.

Ruby recognizes that often times, people have questions about over-the-counter medications they just don’t know who to turn to have their questions answered. Ruby said it is his goal to build a trusting and working relationship with his customers and try to help them in any way possible with their health care needs when it comes to choosing the right medications to deal with their health issues.

He plans to carry a variety of over the counter medications, cards and gifts, Morningstar candles, seasonal candles, Bedford Candies and Tussey Mountain apparel just to name a few. Funds raised from the sale of Tussey Mountain items, he said, go directly back to the school.

Blood pressure screenings, diabetic testing and event a Pennsylvania Lottery machine will again be available at the new pharmacy. It will also have a cooler with drinks in the future.

Ruby said another goal is to improve healthcare by getting people access to what they never had before and working with customers on their needs. Being an accessible health care need provider is something he sees as a part of being a hometown pharmacist.

At present, Ruby said he will have six pharmacy technicians working at the pharmacy with some familiar faces from before coming back to work at the Saxton location as well as some from the Everett area. “All assembled, we will have 70 years of experience working here working toward meeting and bettering the health care needs of our customers,” added Ruby.

While the business will open Sept. 23, regular hours will be from 9 a.m. to 5:30 p.m. Monday through Friday and 9 a.m. to 1 p.m. Saturdays. Ruby said he is not planning a grand opening until October.

The pharmacy will begin accepting calls and transfers Thursday, Sept. 19.

Courtney said the goal of the new pharmacy is to be family owned and operated and both she and Tyler encourage area residents to stop in and see their newly renovated pharmacy and say hello.

Adam can be reached at dnews@huntingdondailynews.com.