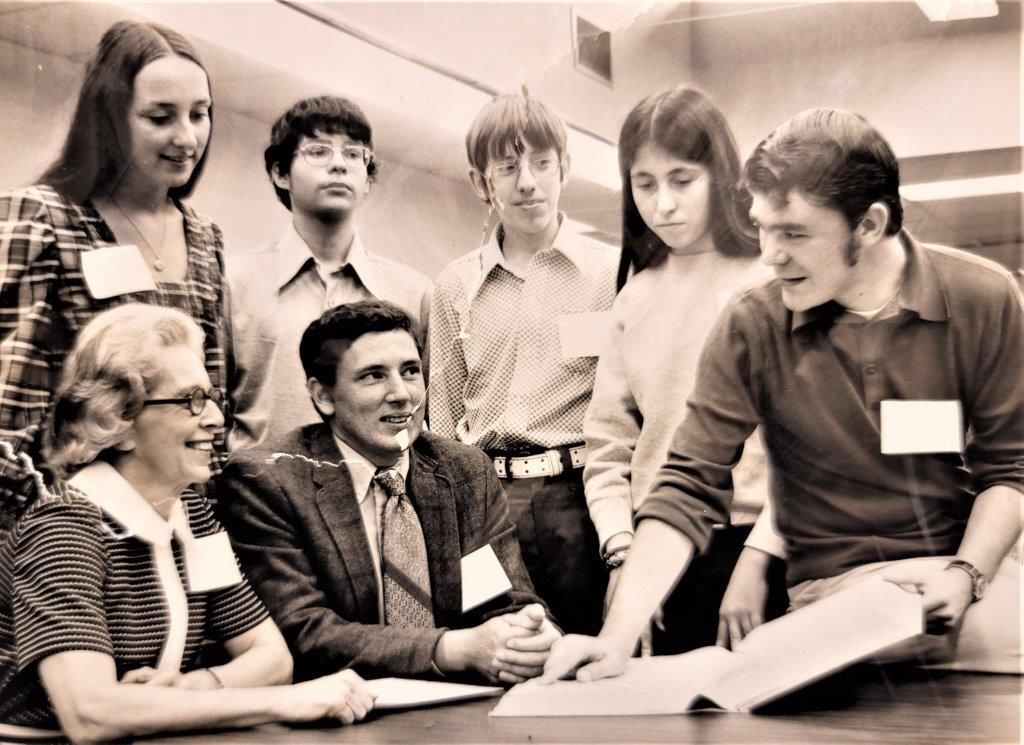 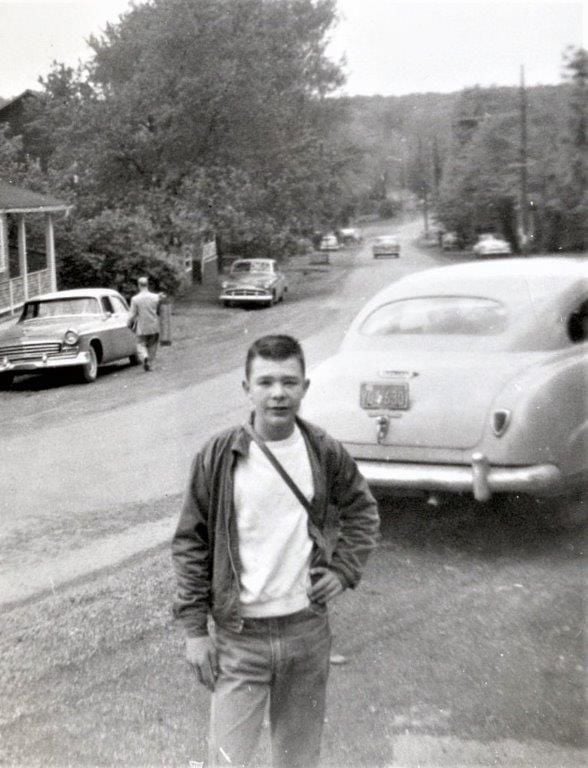 Sporting a crew cut and a camera strapped around his chest, a young Ron Morgan is at the foot of the old Robertsdale Elementary School in 1960. Morgan, who was in 8th grade at the time, was planting the roots for a lengthy career in the newspaper and photography business. The man in the background is Don Brocht, famed Robertsdale High School band director and later music director at the new Tussey Mountain High School. 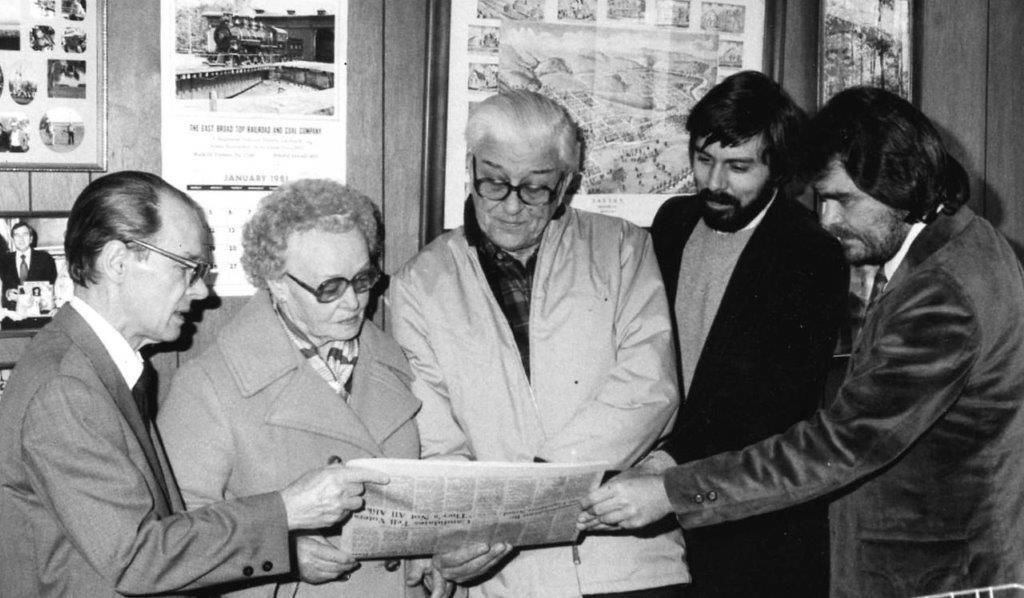 Jan. 30, 1981, The Daily News celebrated the 10th anniversary of the opening of the newspaper’s Saxton bureau. Taking part in the gala observance in the Saxton office were, from the left, Eugene Shore, DN editor; Peg and Les McClain, Robertsdale residents; Ken Smith, DN advertising director at the time the picture was taken; and Saxton DN bureau chief Ron Morgan.

Sporting a crew cut and a camera strapped around his chest, a young Ron Morgan is at the foot of the old Robertsdale Elementary School in 1960. Morgan, who was in 8th grade at the time, was planting the roots for a lengthy career in the newspaper and photography business. The man in the background is Don Brocht, famed Robertsdale High School band director and later music director at the new Tussey Mountain High School.

Jan. 30, 1981, The Daily News celebrated the 10th anniversary of the opening of the newspaper’s Saxton bureau. Taking part in the gala observance in the Saxton office were, from the left, Eugene Shore, DN editor; Peg and Les McClain, Robertsdale residents; Ken Smith, DN advertising director at the time the picture was taken; and Saxton DN bureau chief Ron Morgan.

It seems like only yesterday when I began a career as a reporter, photographer and columnist with The Daily News. But to be accurate, it was 50 years ago this month, and a lot of water has run over the dam since 1971.

Jan. 4, 1971, was the date I officially began my full-time duties with the newspaper along with the opening of the Saxton branch office at 710 Main St. Over the next few weeks, I will briefly share in this column some highlights of a half of a century of news reporting and involvement in many community groups and projects in the area.

To be more precise, my onset as an employee of the DN predates 1971. After the completion of a four-year hitch with the U.S. Army Sept. 26, 1970, including a tour of duty in Vietnam, I began an internship with the newspaper as a part of a training program paid for in part by the VA, setting the stage for the opening of the Saxton DN bureau.

During the three-month training session, the late Eugene Shore and Jim Hunt, longtime DN editors, assigned me several interviews which, among other topics, included a story about a young James Creek man who loved to hunt despite only having one arm.

Still other early assignments included interviews with a Hustontown area young woman who collected an extensive number of coupons resulting in a special award, the retirement of a Langdondale postmaster and a story about a retired Broad Top/Trough Creek area gentleman who was born the year Gen. Custer and the Seventh Calvary perished at the Little Big Horn.

When the Saxton DN office opened 50 years ago, the Saxton/Broad Top area was entering a new era in its varied history but to describe that transition it is necessary to go back to the year 1962. That was the year I began my writing journey with the weekly Broad Top Bulletin.

The early 1960s were a time of change for the region with early planning for the Raystown project introduced and on the Broad Top, the opening of the new Tussey Mountain High School and the nearby Saxton Nuclear Experimental Plant. Also, on the drawing board were plans for the development of the Broad Top Industrial Park at Saxton while surface mining activities were advanced on the tri-county Broad Top Coalfield.

Keep in mind that only eight years earlier the H&BT railroad was scrapped and the EBT made its last trip to Robertsdale and Wood in 1956. With the arrival of the 1960s the Broad Top saw the close of high schools at Saxton-Liberty and Robertsdale which became elementary centers as did the Defiance school.

Being a historian who refuses to throw anything away, this writer maintains a collection of news stories and columns written for the Bulletin starting in 1962. Some of those newspaper contributions include these columns: “The Great Outdoors,” “Teenage Record Review,” “Looking Back” (my very first column that focused on area history), “Question Line,” “Roving Reporter” and “Dateline Broad Top,” a prelude to “Around the Broad Top.”

Many of the Bulletin columns centered around organizations and activities that I was involved in at the time, some of which I continue to report on today for area newspapers.

Some of those personal interests and involvement continue today including conservation, tourism promotion, history and heading the list: the ongoing EBT preservation effort.

Just four years after its closing as a coal hauler, the EBT reopened as a tourist operation in 1960 at Rockhill, as community leaders at Mount Union vied for the establishment of Pennsylvania’s first railroad museum on the northern end of the EBT. Among the two local bidders for the new museum were Altoona and Mount Union. Unfortunately for Huntingdon County, the Pennsylvania Historical and Museum Commission chose to construct the museum at Strasburg in the southeastern part of the state.

As southern Huntingdon County leaders energized the bid for the railroad museum at Mount Union, Robertsdale area leaders launched “Operation Recovery,” which called for the reopening of the EBT between Mount Union and Robertsdale as well as the creation of a coal miners museum and tourist mine (the Robertsdale Slope No. 5 deep mine). And that was way back in the early 1960s!

In addition to being among those taking part in the Robertsdale project (referred to as “Operation Recovery”) I wrote numerous news stories for the Bulletin about the EBT project as well as other heritage preservation initiatives around the Broad Top.

Other interests focused on the creation of the RW&BT Volunteer Fire Co. (I am proud to have been among the founders of the organization, a secretary and chaplain during the mid-1960s) and the founding of the Junior Forest Rangers Conservation Club which operated out of the old Robertsdale Election Hall.

My interest in news reporting, photography and history dates to the early 1950s when I closely followed the writings of my great uncle Johnny Young (a well-known Broad Top area coal miner) and Shel Horton (accomplished writer, radio personality, businessman and civic leader) in the Bulletin as well as Albert M. Rung’s weekly history column in the DN. It was also an honor to be chosen by my 10th grade history teacher, the late Dick Baddorf, to collect and report the local election returns for the NBC television network during the early 1960s.

My “Dateline Broad Top” column in the Bulletin continued uninterrupted while I was in the army including weekly columns penned in Vietnam. During the last 14 months of army service, I compiled columns for the Bulletin from Fort Eustis, Virginia, including preparation of several contributions for a history book that was being prepared in 1969-70 for the Bedford County Bicentennial Celebration (assisted by the late Jon Baughman, also a Broad Top area historian and later editor-publisher of the Bulletin).

Before leaving for the military, I was also employed by the Bedford County Press at Everett where I did some writing while working in the newspaper print department. That was during a time when most newspapers still relied on the “hot lead” printing process including the old, clanky linotype machines. All that would change with the introduction of offset printing during the late 1960s.

Coming Up: the transition from the Bulletin to a full-time job with The Daily News and 50 years of covering local and regional news events.