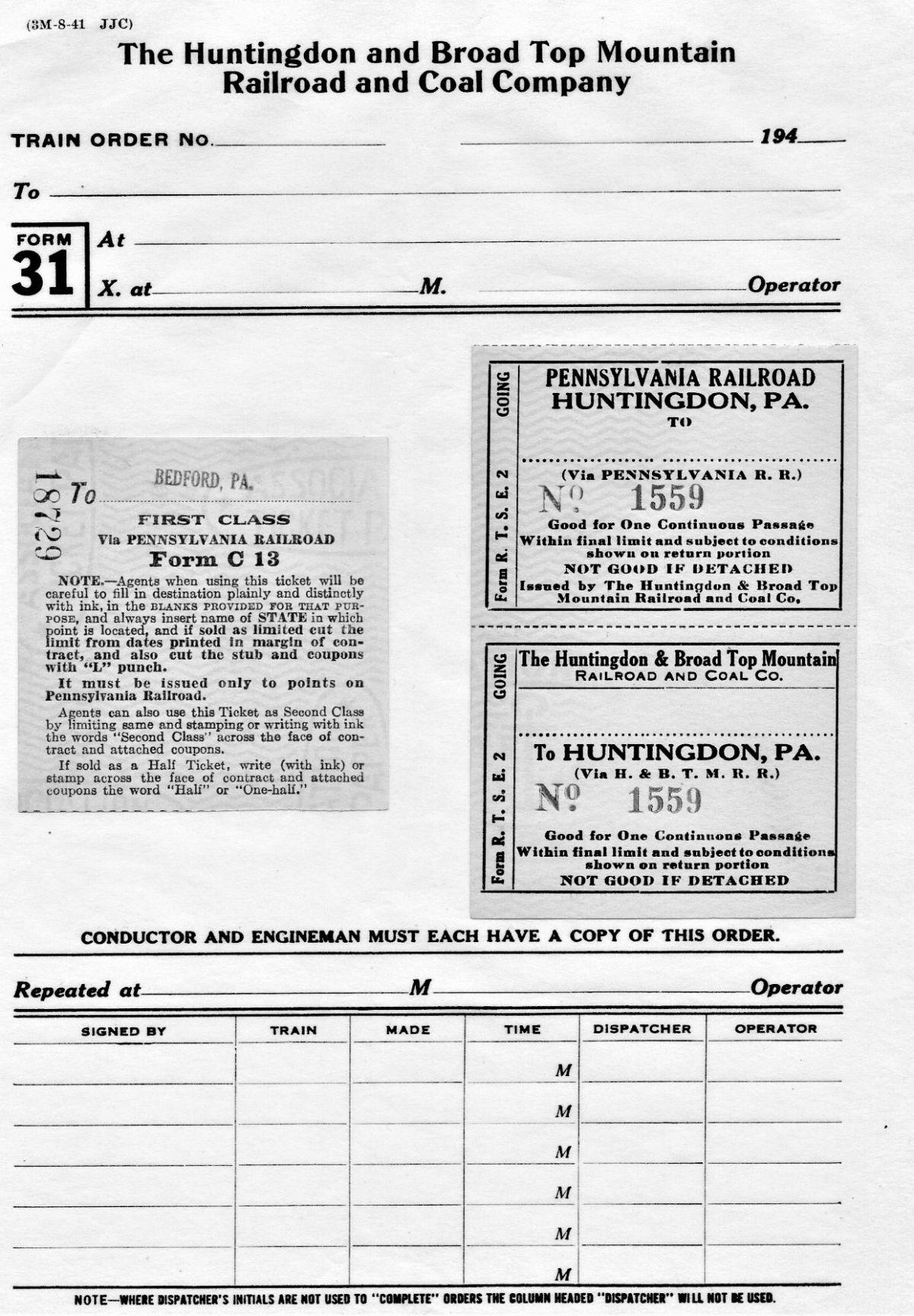 A tip of the Morgan hat goes out to Mark Cowder of Huntingdon who dropped off an exceptional collection of H&BT memorabilia in March that he acquired last year at an auction. I have enclosed several of the items with today’s column.

A devoted reader of this column, Mark loves local history and is anxious to visit the Broad Top Area Coal Miners Museum in Robertsdale. Mark thought the H&BT relics would be of interest to the columnist and the readers. Some of the material will be placed on display in the Coal Miners Museum in the coming weeks.

While on the topic of the H&BT, I should report that the COVID-19 situation has interfered with plans for the release of volume three of the Huntingdon and Broad Top Mountain Railroad history. But if all goes well, the new book should be on the streets by Christmas time. More details later.

It should be noted that Huntingdon County is blessed with many historical societies, heritage attractions and related organizations. I am pleased to be associated with many of the organizations in telling the story of the county’s colorful past and the preservation of that important history and heritage.

Nearly every part of the county has a local historical society or some type of museum or attraction. And that’s great news for the younger generation which needs to discover its past, as well as older countians who will benefit from a refresher course about local history.

Many county historians and history fans agree that local history instruction needs to be put back into our schools. Young people need to achieve an understanding of their past, both the good and bad times. Learning from past errors will be helpful in avoiding such pitfalls in the future. Enough said on that subject, at least for now!

While concentrating on local history, I should note that the Huntingdon County Historical Society is working on a historical calendar for 2021 as part of its fundraising undertakings. The society puts out an excellent calendar each year that includes sharp photos and brief descriptions about the images. Purchasers of the product will be delighted and with each use of the calendar will welcome the opportunity to discover the county’s past.

Saxton on the move!

The community of Saxton continues to be in the news with the recent announcement that Greenleaf Medical LLC is moving ahead with phase two of an $35 million expansion project expected to generate 500 new jobs.

The company’s major expansion project involves the use of additional space at the former Seton Co. complex situated in the Broad Top Industrial Park at Saxton, noted Phil Goldberg, CEO of Green Leaf Medical, a grower-processor of medical cannabis. The expansion project, announced in late June, comes as good economic news for the Saxton/Broad Top area.

The 274,000-square-foot former Seton complex was purchased by the company in April 2017 and currently employs over 100 persons. The announcement of the 100,000-square-foot upgrade indicated that work on the project would take about 13 months to complete.

“With this expansion, we believe Green Leaf will have one of the largest indoor medical cannabis operations in the East Coast,” remarked Goldberg. “We hope our expansion and the multitude of opportunities it will create, generates renewed interest in both Saxton and Bedford County.”

Also “great news” for the Broad Top area was the recent announcement that Saxton Borough Council has renewed discussion on supporting and promoting outdoor recreation in the area through the proposed development of 1,200 acres of forest land owned by the borough in the Putts Hollow area of Huntingdon County.

The project also is focusing on the development of a three-mile rail-trail between Puttstown and the Dudley/Minersville area utilizing the borough-owned Shoup’s Run branch of the Huntingdon and Broad Top Mountain Railroad. The right of way also includes an original H&BT railroad trestle at Middletown, Carbon Township, Huntingdon County.

Saxton Mayor Alan Smith and borough council president Lester Meck are very excited about the project as the municipality studies the potential of the development that would include hiking, hunting and biking opportunities as well as focusing on the coal mining, ironmaking and steam railroading heritage of the Broad Top.

Smith has contacted the state Department of Conservation and Natural Resources (DCNR) seeking guidance and funding to make the proposal a reality.

The Shoup’s Run H&BT Rail Trail would compliment the existing H&BT Rail Trail created along the main line of the former coal-hauling railroad between Tatesville and Red Cut by the Broad Top Township Supervisors.

Area residents and H&BT fans would love to see the mainline right of way extended from Red Cut to the Warriors Path State Park and the community of Saxton.

As noted in many previous columns, Saxton and neighboring Stonerstown served as the nerve center of the railroad for nearly a century. Chartered in 1852, the standard gauge railroad reached Stonerstown in 1855. After the Civil War, the new borough of Saxton became the repair center for the H&BT. A round house, freight station, railroad yards and other railroading facilities were erected at Saxton.

Only a handful of relics of the H&BT’s “glory days” can be found today in the Saxton/Broad Top region, a reminder of King Coal’s long reign on the Broad Top Coal Field.