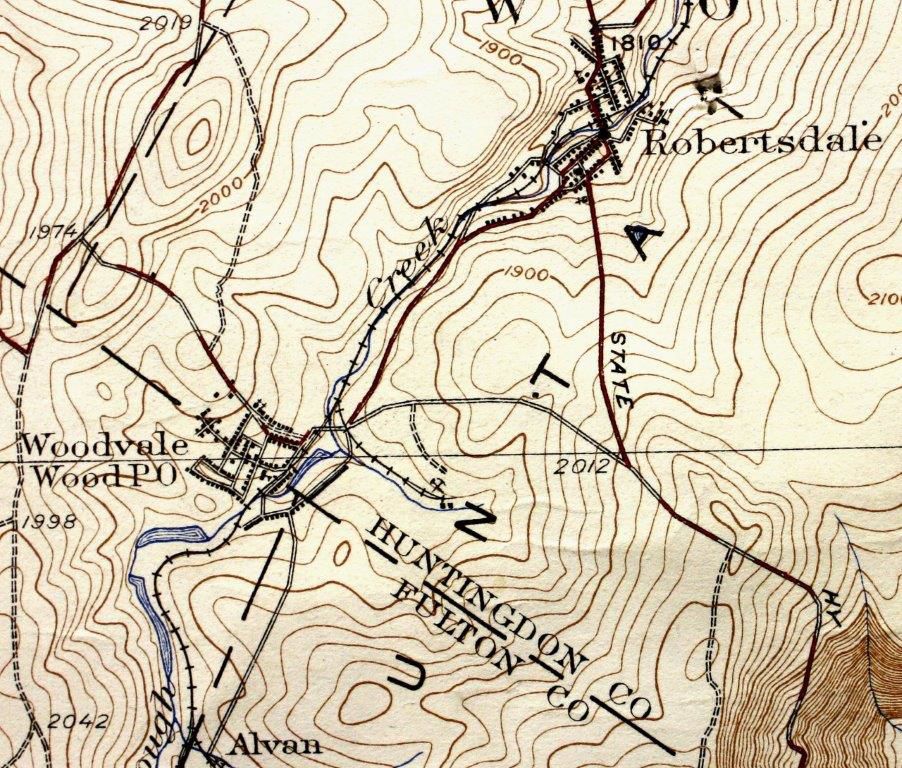 Here’s another map to dramatize the three-county division of the Broad Top area as shown at Wood(vale), where Huntingdon, Bedford and Fulton counties come together. The historic community was created in 1891 with the extension of the coal-hauling East Broad Top Railroad from nearby Robertsdale to the new Rockhill Iron and Coal Company’s No 6 “Shaft Mine.” 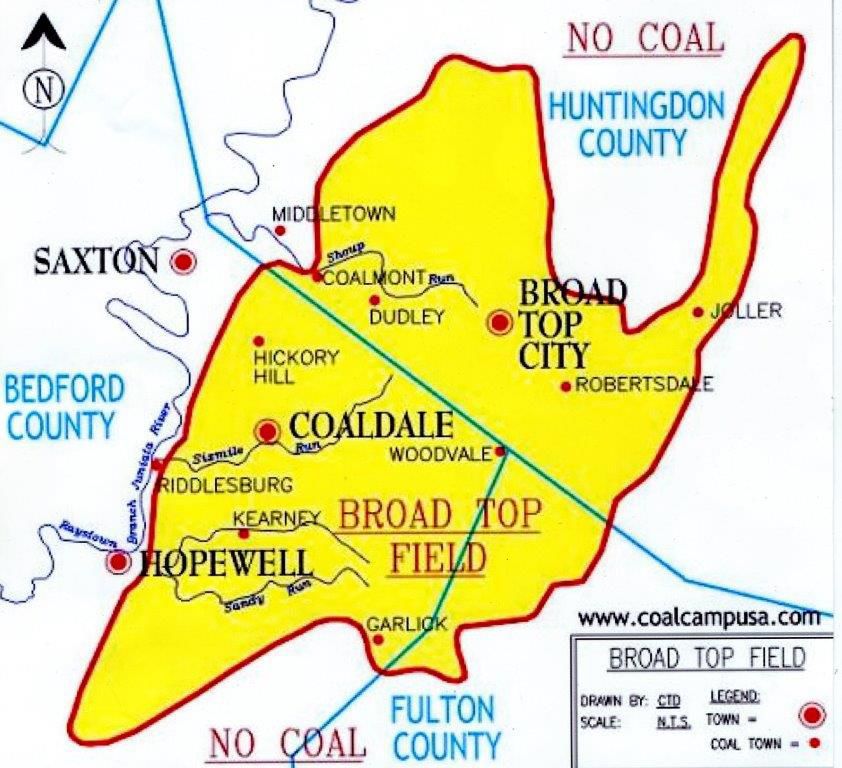 To better understand the geographical layout of the Broad Top Coal Field, here’s a map showing the dividing lines between Huntingdon, Bedford and Fulton counties. Read Echoes from the Past for details.

Here’s another map to dramatize the three-county division of the Broad Top area as shown at Wood(vale), where Huntingdon, Bedford and Fulton counties come together. The historic community was created in 1891 with the extension of the coal-hauling East Broad Top Railroad from nearby Robertsdale to the new Rockhill Iron and Coal Company’s No 6 “Shaft Mine.”

To better understand the geographical layout of the Broad Top Coal Field, here’s a map showing the dividing lines between Huntingdon, Bedford and Fulton counties. Read Echoes from the Past for details.

I want to thank the readers for the nice comments and inquiries about my absence two weeks ago. Let me explain.

On the afternoon of Nov. 25 as I prepared for what I hoped would have been a great Thanksgiving dinner at sister Gwen and Alan Smith’s home my blood pressure skyrocketed resulting in a nearly three-day stay in the VA Hospital in Altoona. Not a good way to celebrate the holiday.

By Saturday morning I was back in Robertsdale with plenty of medicine intended to nurse me back to good health. Several appointments over the past two weeks at the VA were necessary and a few more are on tap for the coming weeks.

Some lifestyle changes and adjustments in my work schedule will also be necessary, the doctors warned me.

As I write this column, I’m feeling pretty good but—as I unfortunately discovered a few weeks ago—things can always take a turn in the wrong direction.

I’m not crazy about exercise, especially during the cold and snowy winter months, but, like it or not, I’ll be directing some of my free time toward walking, etc. as well as watching what I eat (another challenge I’m not up for).

No doubt, 2020 will mean some changes not only health-related, but with my work schedule. Full retirement is not an option for me due to financial challenges and other conflicts. But there will be some alterations during the new year.

Thanks to the readers for having patience with me and a special thanks to Adam Watson for filling in with newspaper meeting coverage.

As Adam noted in his recollections a few weeks ago about beloved Broad Top Bulletin owner/editor, the late Jon Baughman, we continue to grieve over his death, but celebrate his accomplishments over the many decades around the Broad Top.

In a way, Jon is still with us. Just pick up one of his many history books or scan the pages of the Bulletin over the past five decades and you quickly discover all the great things Jon did for the area, not just in terms of history writing, but his community involvement.

I count it a blessing to have been Jon’s friend, fellow newspaper colleague and co-author in writing numerous Broad Top area history books. I know that he is up there cheering the Broad Top on as it tackles its many challenges while celebrating the region’s many accomplishments.

In an upcoming column, health and scheduling permitting, I’ll update the readers about the progress being made on the third volume of the H&BT History book. I’m about two-thirds through the writing and have lined up many interesting photos (some never seen in print) that will appear in the new book.

If all goes as planned, the book will be released sometime in early or mid-2020.

By the way, in an upcoming H&BT column I’ll share some interesting notes about the Entriken area as recalled by William Ford of Entriken and Marcia Brallier of Marietta. Both shared some updates about a photo of the H&BT at Entriken which appeared in The Daily News a few weeks ago.

Attention readers, the H&BT series will be interrupted over the next few weeks to make space for the Christmas column and an end-of-the-year column. Be warned, Buckskin Zach will be visiting us for the holidays while I will be sharing some very special memories of Christmases past.

Check out the map appearing with today’s column. It’s the community of Wood(vale) as seen in a 1930s U.S. Geological Survey topographical map.

By now, most folks should know that Wood(vale) is situated in three different municipalities: Wood Township, Huntingdon County; Broad Top Township, Bedford County; and Wells Township, Fulton County. You can see the physical areas by closely examining the map.

Also, on the map is the right of way of the narrow gauge East Broad Top Railroad which was extended to Wood(vale) from Robertsdale in 1891 to haul coal from the new Rockhill No. 6 “Shaft” Mine.

In later years, the rails pushed south into Fulton County concluding at Alvan, where coal was transported from the Rockhill No. 9 mine, and still later from local surface mining operations.

We conclude the column with some brief historical notes about the well-known mining hamlet which was also the home of the “Twin Mines,” numbers 7 and 8.

The Wood(vale) area included several mine tipples as well as the familiar powerhouse/boiler house, make-shift depot, mule stables, engine house and warehouse, most of which were situated around the No. 6 mine operation. As new mines opened, similar structures were erected at some of these mines.

Like nearby Robertsdale, the village of Wood(vale) consisted of numerous “miners’ houses,” a post office and a “company store.” Also, Wood(vale) included a diverse ethnicity, composed of a mix of American-born and foreign-born miners and their families (for examples: nicknames were given to sections of the town based on class or ethnic origins like “Millionaire Row,” (Fulton Street).

Also, situated in Wood(vale) were two school buildings and two churches (the churches are still there!). The churches include St. Michael’s Orthodox Church and the nearby cemetery and the Wood(vale) United Methodist Church.

Other landmarks familiar to older Wood(vale) residents are the “Club” (a small store), the old “Russian Hall” (a small building used by the St. Michael’s Orthodox Church congregation for social activities), the old “Hot Water Dam,” located on Trough Creek, next to the No. 6 mining area, the old Wood(vale) Reservoir, located on the southern end of town (not to be confused with the present day reservoir, located a few miles south of the village) and the vacant Rockhill Fire Tower which structure still stands high atop Wrays Hill (eastern side of Broad Top Mountain) overlooking the town (note that a smaller wooden tower once stood on the western end of the hamlet).

Located near the center of Wood(vale) is “Huntingdon Square,” a popular recreational area, baseball field and community park, maintained by the “Citizens Community Association of Wood.” During the early days of the town a small, wooden baseball stadium was located on the site. (In addition to the main ball field, a secondary facility, the “Nick Kovalchick Memorial Ball Field,” is located just northwest of Wood(vale.)

The town also was the location of a large shoe factory which originally housed the No. 6 mining operation. The former Claudia Footwear complex was expanded during the 1960s first as a shoe factory and later as a furniture manufacturing facility. Skilled Broad Toppers produced some of the most exquisite home and office furnace in the state inside the building.

The unused and dilapidated structure and surrounding property is now owned by the Wood Township Supervisors, its future undetermined.