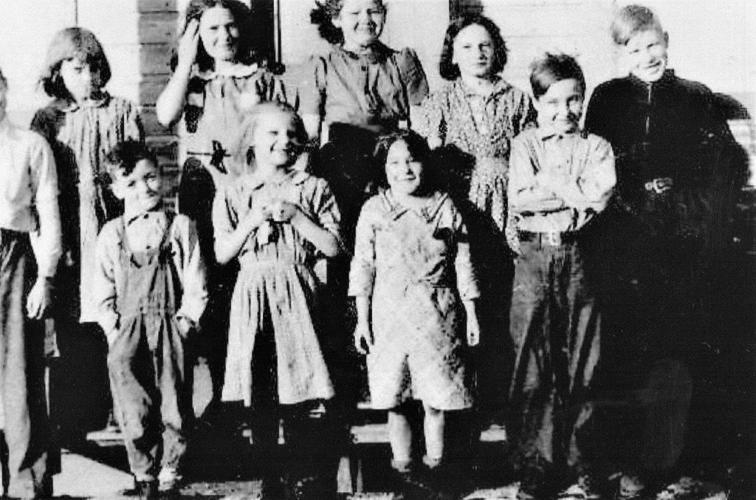 Here’s a photo of the Garlock Mine School which once existed high a top the Broad Top Coal Field overlooking Wells Valley. The photo shows a group of students appearing in front of the school around 1940. The Garlock Mine was served by the H&BT’s Sandy Run Branch and also connected with the nearby Reichley Brothers logging railroad. 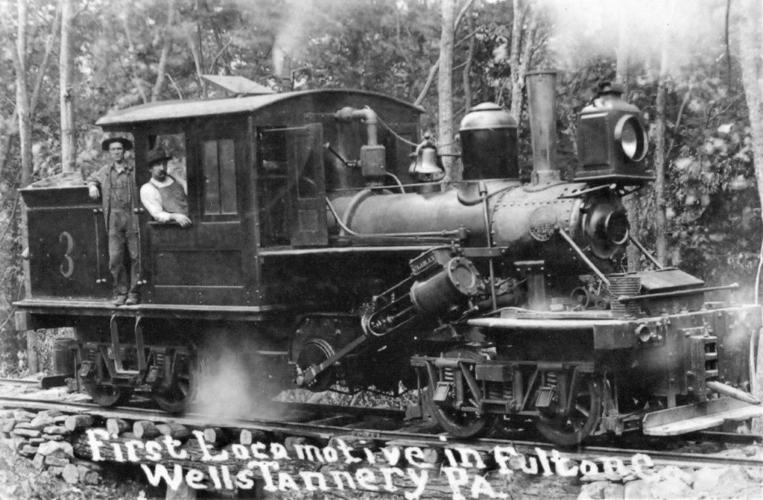 Steam locomotive No. 3 of the Reichley Brothers & Co. (logging) Railroad appears in the Wells Tannery area of Fulton County in this early 20th century photo. Read today’s Echoes from the Past for details. 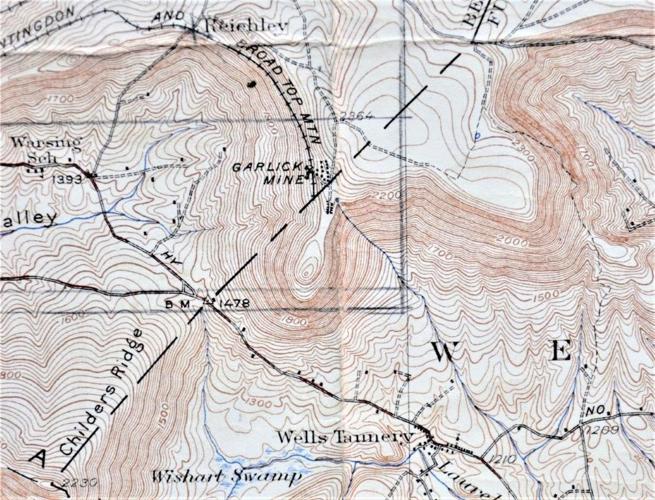 A 1940s series Geographical Survey map shows Wells Tannery in the bottom center of the map while the Garlick Mine and small town of Reichley appears along the H&BT’s Sandy Run branch high a top Broad Top Mountain. The old Reichley Brothers logging railroad of northwestern Fulton County served several deep mines along Sandy Run during the early part of the 20th century.

Here’s a photo of the Garlock Mine School which once existed high a top the Broad Top Coal Field overlooking Wells Valley. The photo shows a group of students appearing in front of the school around 1940. The Garlock Mine was served by the H&BT’s Sandy Run Branch and also connected with the nearby Reichley Brothers logging railroad.

Steam locomotive No. 3 of the Reichley Brothers & Co. (logging) Railroad appears in the Wells Tannery area of Fulton County in this early 20th century photo. Read today’s Echoes from the Past for details.

A 1940s series Geographical Survey map shows Wells Tannery in the bottom center of the map while the Garlick Mine and small town of Reichley appears along the H&BT’s Sandy Run branch high a top Broad Top Mountain. The old Reichley Brothers logging railroad of northwestern Fulton County served several deep mines along Sandy Run during the early part of the 20th century.

Although no coal was mined in the valleys surrounding the east and southeastern Broad Top Coal Field of Huntingdon, Bedford and Fulton counties, several communities and geographical areas had direct and indirect connections with King Coal and the steam-powered railroads.

Over the next few weeks, the columnist will briefly examine the history of Wells Valley in Fulton County and Coles Valley (often referred to as Groundhog Valley) situated in Huntingdon County. Small towns like Wells Tannery, New Grenada and Waterfall survive today, while the remnants of other rural hamlets lie hidden amid the trees, mountainsides and rolling fields that flow around the eastern base of Broad Top Mountain.

With assistance from Jerry Wright, a well-known Wells Tannery historian and civic leader, this writer is putting together a new exhibit that will open to the public this spring in the Broad Top Area Coal Miners Museum at Robertsdale.

Wright was elected to the coal miners’ historical society’s 12-member board of directors for 2020 and has provided some interesting photos and relics for the exhibit that identify with coal mining, steam railroading and the logging industry.

Also, a part of the new exhibit is a brief history of the development of the Pennsylvania Turnpike, which was constructed during the late 1930s using the right of way of the stillborn South Penn Railroad (SPRR).

Two local tunnels sunk into the mountains as part of the old railroad right of way and the new toll road survive today, both near Wells Tannery and the topic of a proposed recreational trail in Bedford and Fulton counties.

The Sidling Hill and Rays Hill tunnels were created as part of the old SPRR and redesigned for use on the new turnpike which passed through Huntingdon, Fulton and Bedford counties, not far from the Wells Valley area. Broad Top area coal miners were among the hardy band of workers who built the two local tunnels for both the SPRR and later, the turnpike.

This writer, and other historians including Jerry Wright, have researched and penned accounts of the Reichley Brothers logging operations that included a makeshift steam consist which made connections with the H&BT high a top the southeastern side of Broad Top Mountain and Coal Field, often referred to on earlier maps as Wrays Hill, Rays Hill and Enid Mountain. The name Ray (Wray) refers to early Bedford County pioneer and trader Robert Ray for which the 30-mile-long Raystown Branch (and lake) of the Juniata River derives its origins.

In this brief narrative the Echoes from the Past columnist will also offer some of his own memories about New Grenada and Waterfall.

The columnist was born in New Grenada, at the foot of the Broad Top Coal Field and mountain (also referred to as New Grenada Mountain and Wrays Hill on early maps) Feb. 22, 1946. I lived in my grandparents’ home (John and Celia Watkin) which was located just across Roaring Run Creek and the old, two-story Hoover Store.

Jerry Wright recalled the old Reichley Brothers logging railroad made its way through the Wells Tannery area, through his present day property and up the steep southeastern slope of Broad Top Mountain (Wrays Hill/Enid Mountain) for a connection with the old Garlock Mine and the small logging and mining hamlet of Reichley, situated in Broad Top Township, Bedford County, along the Sandy Run branch of the H&BT.

Wright explained that he and close friend Ronnie Eichelberger recently visited three old coal mines and a reservoir on the top of Enid Mountain, all situated in Wells Township, Fulton County.

According to Wright, the Albert Wright Mine opened in 1949 and only operated for over a year. “It’s been reported the coal was of poor quality and the mine was on top of the mountain and dry.”

The second, deep mine was known as the Wishart Mine and described by Wright as “a very old mine,” located just below the top of the mountain. “It is connected to Route 915 by the ‘Coal Road’ which may have been built by hand,” explained the Wells Tannery historian.

A familiar operation to many residents during the heyday of King Coal, the mine proved an important source of coal for the valley residents. “At one time, sleighs hauled coal down this road in the winter to sell coal in Wells Tannery,” explained Wright adding that “clear water exits this mine.”

Another portal was the Miller Mine which was located .08 mile northeast of the Wishart Mine, situated on the top of the mountain. Wright reported that the mine closed in the mid-1950s about the time the H&BT was scrapped between the Cypher Bridge and Huntingdon.

“This area was ‘strip- mined’ (surface mining operations) in the 1960s with a deep cut through the Miller Mine,” said Wright. “Orange sulfur water exits this mine and flows into Wells Valley.”

One of the more familiar deep mines located high atop Broad Top Mountain overlooking Wells Tannery and the southern end of Wells Valley was the Garlic Mine, which was in operation in Broad Top Township, Bedford County, not far from the Fulton/Bedford counties’ line.

Wright pointed out that although the mine was situated in Bedford County, its water reservoir is in Wells Township, Fulton County, about .36 miles east, northeast of the Wishart Mine. “The reservoir still holds a lot of clear water which flowed to the Garlic by gravity,” he noted.

It should also be noted that a much larger mining operation once existed not far from the Enid Mountain area known as the Alvan Mine. Here, in Wells Township, Fulton County, the narrow gauge East Broad Top Railroad reached its southern-most terminus.

Also located nearby was the vast No. 9 deep mine operations, all a part of the old Rockhill Iron and Coal Company mining dynasty of the late 19th and early 20th century.

To help support the deep mines located in Broad Top Township, mostly situated along or near the H&BT’s Sandy Run branch, the Reichley Brothers logging operations in the nearby Wells Valley area of Fulton County provided needed mine props and other wooden products.

To reach the mining area the Reichley Brothers logging railroad mounted the steep southeastern slope of Wrays Hill (Broad Top Mountain) to reach the new mining hamlet of Reichley, so named after Anthony and Frederick Reichley, owners of the small steam railroad operation.

The two brothers began purchasing land in the Wells Tannery area around 1908, wrote Wright. “They were operating a logging railroad at Milroy, Pennsylvania, and during the winter of 1909-10, they moved their equipment, which included two locomotives, to Wells Tannery.”

The Reichley Brothers narrow gauge railroad connected with the H&BT along Sandy Run in Broad Top Township, Bedford County, resulting in the construction of a spur in 1922 to the Garlick Mine. From the top of the mountain, the logging line left the H&BT spur in the area of Henwright Mountain Road before descending Enid Mountain.

Coming up: the operation of the Reichley Brothers logging line and nearby logging operations helped propel the Wells Valley, Wells Tannery and Sidling Hill area into the pages of industrial and transportation history while supporting the survival of King Coal high a top Broad Top Mountain.