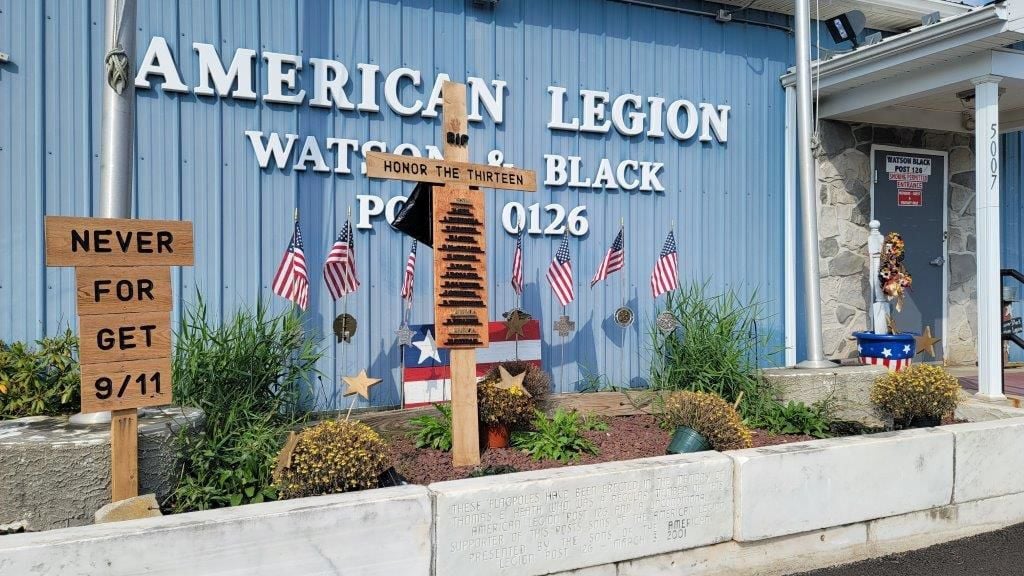 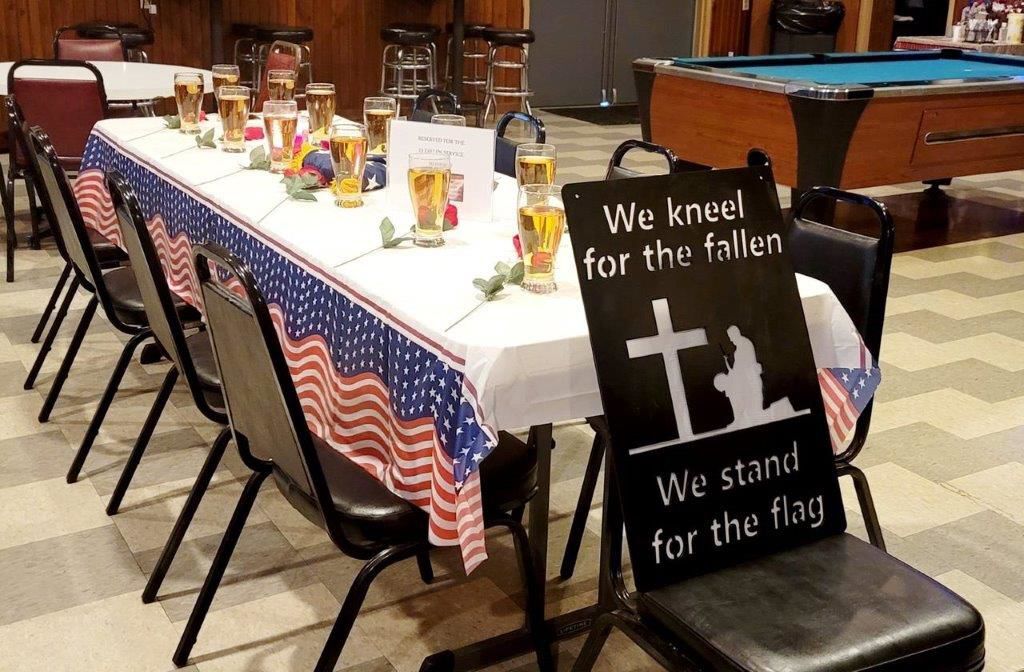 The Watson and Black American Legion Post Auxiliary at Broad Top City joined other Americans this past fall in remembering the brave soldiers who lost their lives during the controversial withdraw of forces from Afghanistan. A memorial table was set up in the post home where visitors could also pause to remember the fallen heroes.

The Watson and Black American Legion Post Auxiliary at Broad Top City joined other Americans this past fall in remembering the brave soldiers who lost their lives during the controversial withdraw of forces from Afghanistan. A memorial table was set up in the post home where visitors could also pause to remember the fallen heroes.

In this week’s column, we continue with observations and conversations with our readers.

Recall the photo that appeared in last week’s newspaper of a large group of employees standing in front of a large structure. I asked for information and several readers suggested the photo was taken in Mount Union while others pointed to various other locations. Now, here’s the rest of the story!

Coming to the rescue was Polly Smith of Huntingdon, a noted historian in her own right and an activist in the Huntingdon County Historical Society.

According to Polly, the photo was taken July 2, 1928, at the Huntingdon Specialty Co., earlier known as the Susquehanna Silk Mill. “The company was sold to the Huntingdon Throwing Co. in 1940,” she explained. “The sprawling plant along the railroad tracks in Huntingdon eventually became Owens-Corning Fiberglas and was once Huntingdon’s largest single employer.”

(Remember the Fiberglas marbles young folks searched for around the plant? Polly added that the plant was later converted by Owens-Corning Fiberglas to make fibers from glass marbles.)

During the early part of the 20th century the original occupants of the plant produced silk products, including parachutes for the military.

The panoramic photo appeared in the late Nancy Shedd’s “Two Centuries in Huntingdon” on pages 108 and 109. Polly reminds the public that the book is on sale at the county historical society.

Barb McMath of the Shirleysburg area contacted me last week, inquiring about locations on the Broad Top, where her ancestors (the Shapiros) once worked and lived.

The readers may remember the series I penned a few decades ago about the Shapiro family and their connections with southern Huntingdon County, Mount Union and the Broad Top. Helping me with information was Barb who is also active with heritage activities in the Shirleysburg area and the Huntingdon County Farm Museum.

The early Shapiro family had their start in the retail store business in several locations including Broad Top City. I’m looking for some old photos of the Shapiro Store which was once a prosperous business in the “city.”

Recall that the Shapiro family also owned two theaters, one in Mount Union, the other in Six Mile Run. The late Greg Crawford, originally of Mount Union, ran the two cinemas for the Shapiros for many years before acquiring the Six Mile Run Theatre which he reopened in the early 1960s as the Crawford Theatre.

Did you known that the creation of the Pennsylvania State Police during the early part of the 20th century had some connections with King Coal?

In several past columns, I alluded to the early development of the Keystone State’s celebrated law enforcement agency, noting that the PSP was formed in part to counter the abuses of coal and iron companies’ private police agencies including coal company use of the “Coal and Iron Police” throughout the industrial regions of the state during the state 19th century and early 20th century.

During its early days, the state police agency was referred to as the Pennsylvania Motor Police with most of the state’s 67 counties having stations/barracks within their boundaries. Huntingdon, Bedford and McConnellsburg area barracks were located within driving distance of the Broad Top Coal Field where coal miners’ strikes and on occasions, acts of violence occurred.

One of the last major miners’ strikes/labor disputes took place in the late 1930s as America was focusing on the Great Depression and preparing for World War II. The need for America’s “hard” and “soft” coal reserves held top priority as both labor and management found themselves victims of their own unwillingness to negotiate in good faith while turning their heads to the long-term negative results of their stubbornness. Although World War II stopped some of the narrow-mindedness on both sides, the labor/management debacle resumed following the war, helping to set the pace for the dethroning of King Coal in the mining regions of America including the Broad Top.

During early spring 1939 labor and management came to blows after the United Mine Workers of America called for a “miners’ holiday” which escalated into a major strike and disruption of the nation’s economy. Negotiations and meetings among all sides, including observations from President Franklin D. Roosevelt, failed to bring the UMWA and officials of America’s mining companies to the peace table. It would be many months before a settlement would be reached.

Front page stories appearing in The Daily News during the spring and summer months of 1939 consistently “headlined” the failure of the two parties to settle their differences even at the expense of America’s well-being as the nation prepared for war.

April 22, 1939, as the labor disputes worsen, Pennsylvania Gov. Arthur H. James announced that the Pennsylvania Motor Police “had been assigned to keep order in six bituminous coal producing counties.” Added the state chief executive, “Motor police have been ordered to do nothing which could be construed as taking sides.”

Initially, the police agency was assigned to the counties of Washington, Beaver, Clarion, Indiana and Mercer. The appeal for police coverage, which came “at the request of local officials,” involved numerous “disturbances on the highway….and other disorders” in several southwestern Pennsylvania mining counties.

Continued The DN front page story, “The bulk of the disorder was caused by persons attempting to halt the movement of coal trucks … the disturbances have been strictly minor in nature and have been handled without difficulty … few arrests were necessary and these only for such charges as trespass, assault and battery and malicious mischief.”

In the Huntingdon County part of the Broad Top Coal Field, near Cooks, Todd Township, a mine tipple was “wrecked” by unknown protestors, causing damage to the small country mine.

Lewis Garlock was the operator of the Cooks area mine which was “dynamited by persons unknown.” The event took place around 3 a.m. April 19, 1939. It was the first “mine disorder” believed to be associated with the ongoing labor/management dispute of early 1939, The Daily News reported.

According to the front-page newspaper report, the Garlock firm was “filling emergency orders for coal during the mine shut-down, and the tipple at his mine was dynamited by persons unknown.”

The report noted that 25 or more tons of semi-bituminous coal was being prepared for shipment (apparently on the nearby EBT Railroad) when the incident happened. Initial estimate of damage was set at $100.

Concluded the newspaper story, “Since the miners’ holiday began Garlock and a couple of his sons had been mining coal to take care of necessary demands.”