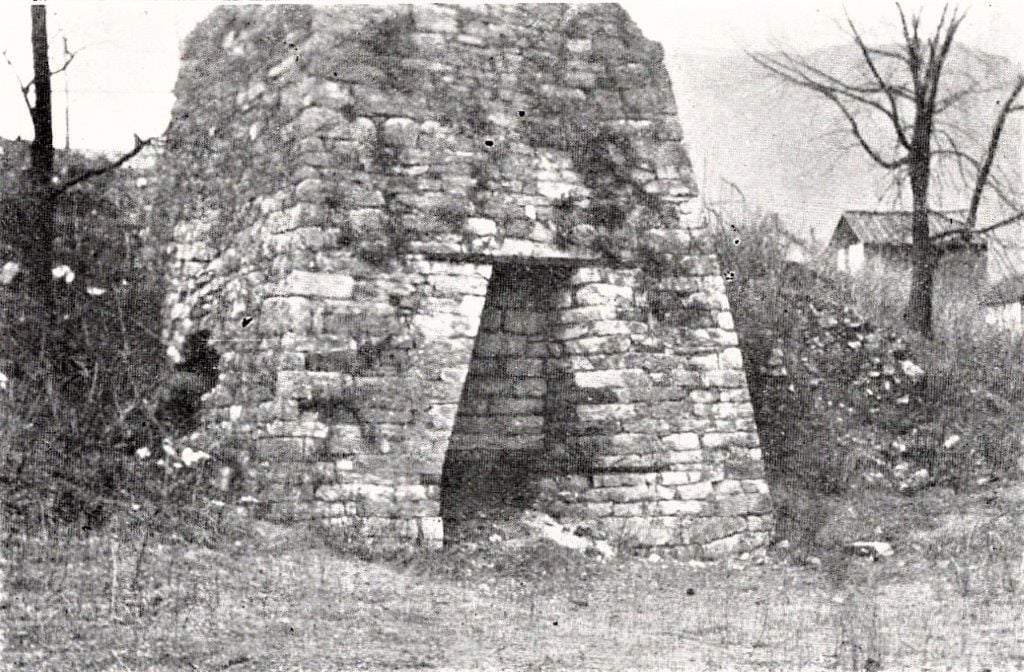 Before the use of coal in the manufacturing of iron on the Broad Top, the Hopewell charcoal iron furnace was erected around 1801. Improvements to the furnace took place over the decades to follow with the complex serving as an important customer for the H&BT Railroad. 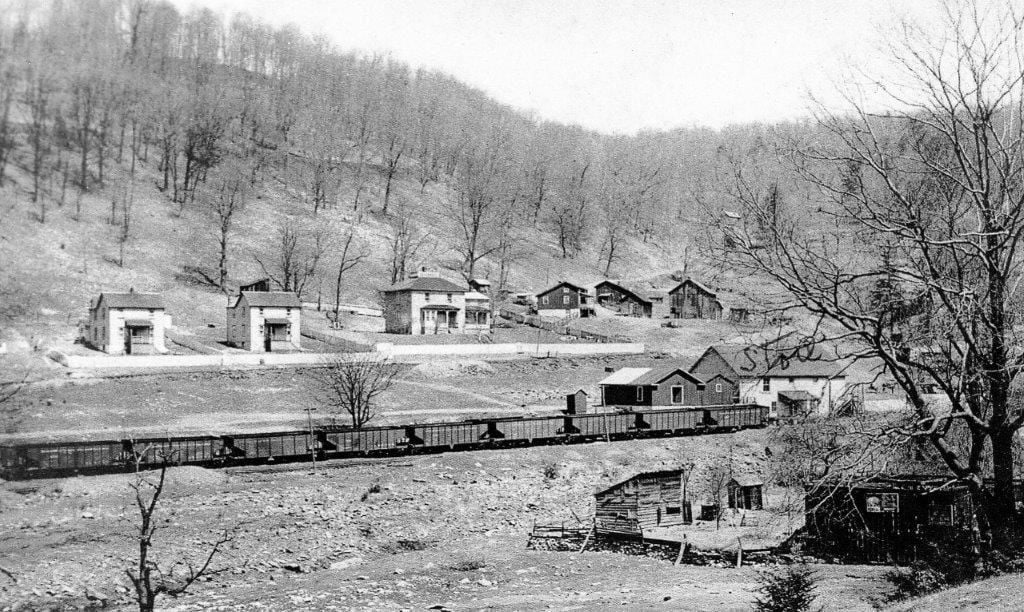 Taken around 1900, this photo captures the industrial might of the community of Minersville in Carbon Township, Huntingdon County. In addition to area deep mines, the community was the scene of coke ovens operated by Broad Top area ironmaker Robert Hare Powel and later by the Joseph E. Thropp Co.

Before the use of coal in the manufacturing of iron on the Broad Top, the Hopewell charcoal iron furnace was erected around 1801. Improvements to the furnace took place over the decades to follow with the complex serving as an important customer for the H&BT Railroad.

Taken around 1900, this photo captures the industrial might of the community of Minersville in Carbon Township, Huntingdon County. In addition to area deep mines, the community was the scene of coke ovens operated by Broad Top area ironmaker Robert Hare Powel and later by the Joseph E. Thropp Co.

Helping to shape the growth of the H&BT during the latter part of the 19th century and into the early years of the 20th century was the continuation of the iron-making industry on the Broad Top. Heading the list were operations in Broad Top Township at Riddlesburg and Liberty Township, Bedford County, just across the Raystown Branch of the Juniata River north of Stonerstown.

The initial success of the Saxton Iron Furnace operation is credited to Robert Hare Powel of Philadelphia, a land and coal trade speculator who was successful at acquiring extensive coal lands near the H&BT’s Shoup’s Run branch at what would become Kenrock and Minersville in Carbon Township, Huntingdon County.

Powel was able to make a swap of his Trough Creek Valley lands with early Broad Top settler and farmer, Henry Miller, for which the present-day Miller’s Run earn its name in Carbon Township. The land switch was made around 1855 as the H&BT was successfully starting daily coal shipments from the Broad Top to Saxton and north to Huntingdon.

Powel opened several mines along Shoup’s Run including the Melrose and Miller openings with the coal going to distant manufacturing plants via the H&BT. A few years after locating his new business on Shoup’s Run, several small villages sprung up around Powel’s deep mines including Powelton, so named after the Philadelphia land speculator and investor. The town of Powelton grew as did nearby Minersville, aptly named after the hard-working Broad Top miners who worked the Broad Top Coal for many decades.

During the American Civil War Broad Top coal was in great demand because of its high quality and the mining district’s strategic location in south-central Pennsylvania. Helping to feed the federal government’s need for coal were shipments of the “black rocks” from Powel’s 1,700 acres of coal lands as well as other mining areas of the Broad Top. Adding to the advantage was the use of the new H&BT and Pennsylvania Railroad in the face numerous disruptions of Maryland coal shipments over the B&O Railroad, the result of Confederate troops cutting the main line.

Although Powel’s mining business prospered along Shoup’s Run, adding to the H&BT’s income, the Broad Top Coal Field faced competition from other mining areas like Clearfield, Pa., where the run of the coal seams was more reliable unlike Broad Top’s “rolling” seams. Adding to the dilemma was the fact that it was cheaper to ship coal from Clearfield because of more favorable freight rates offered by the PRR.

After the Civil War a general depression surfaced across the nation forcing Powel to seek other areas of promising income on the Broad Top. To accomplish this goal Powel transferred his Broad Top coal properties to two associates, John C. Bradley and Charles Berwind who were the forerunners to the creation of the well-known Berwind-White Coal Mining Co. in 1875, followed by the creation of the Powelton Coal & Iron Co., setting the stage for the opening of the Powelton Furnace operation near Saxton.

Among his investments and land purchases included iron ore property in both Huntingdon and Bedford Counties acquired in 1872-79, leading up to the opening of his famed Cove Tunnel on Tussey Mountain overlooking the H&BT Mainline situated near the base of the mountain.

Work began on Powel’s new iron furnace property just north of Stonerstown. The firm of Withrow & Gordon of Pittsburgh erected the first of two furnace stacks with the furnace going into blast in October of 1882 Wisely, Powel depended on his own coal mined in Carbon Township as well as 105 new Belgian coke ovens erected at Minersville. Shipments of the materials were made over the H&BT.

A few years before the construction of Powel’s second furnace in 1887 (next door to his first plant) the accomplished industrialist died in 1883. Powel’s remains were transported from the grieving community of Saxton on a special H&BT funeral train to Huntingdon where the body was transported onto the PRR for movement to Philadelphia and his burial.

After Powel’s death, his sons continued the local operation which was renamed Robert Hare Powel’s Sons & Co. Following up on Powel’s plans for a second blast furnace, his sons help guide the plan to reality with the second furnace placed in blast Aug. 1, 1887.

But financial troubles loomed even as the smoke poured from the second stack of Powel’s Stonerstown complex. Facing financial challenges, the firm eventually became the responsibility of the firm’s trustees with the name of the company changing to the Powelton Iron Co.

Efforts to revive the operation failed and in 1890 the Stonerstown operation closed only to be purchased in December 1895 under the name of the Saxton Iron Co. Sadly, the furnaces never went back into blast and the property was sold Dec. 31, 1900, with the firm becoming the Saxton Furnace Co. On Christmas Day 1900 a cheering crowd of H&BT and Saxton area residents cheered as the furnace complex reopened.

With a sigh of relief, H&BT officials saw a gradual increase in coal and coke shipments from Shoups Run while coke ovens situated near the iron furnace operation were also used in the furnace operation.

But by the end of 1903, financial troubles faced the Saxton Furnace Co. followed by it’s final demise by Jan. 1, 1904, once again “bad news” for the H&BT which was already facing financial challenges of its own.

Two years later, in 1906, noted Everett industrialist Joseph E. Thropp acquired the Saxton area operations, propelling Thropp into industrial stardom for reportedly being the second largest independent pig iron manufacturer in the U.S. At the time, the industrialist owned and operated furnaces at Everett, Bedford County, and at Catoctin, Maryland.

Because of the deteriorating condition of the first furnace, Thropp elected to rehabilitate the No. 2 furnace which went into blast in 1906, producing 100 tons of pig iron a day.

By 1912, the new company supported the Broad Top economy by utilizing coke plants and coal from not only Minersville, but from operations at the Kearney Mines along the H&BT’s Long’s Run branch and the Wigton mines and coke ovens at Coaldale, on the H&BT’s Six Mile Run branch.

As drastic changes surfaced in the iron-making industry in Pennsylvania, several modifications in the Thropp’s enterprise took place including the construction of 67 Mitchell ovens at Minersville which construction began in 1919, partly due to the demand for iron during World War I.

But with the closed of the war the demand for iron and coal diminished, resulting in the Thropp firm declaring bankruptcy in 1921, followed by a sheriff’s sale of the property in 1925. Thropp’s properties in the Everett area (Earlston) and on the Saxton-Broad Top were sold or torn up

There was a brief attempt to reopen the Saxton facility in 1926 under the Everett-Saxton Co.; however, due to market conditions, the Saxton facility never materialized although the Earlston Furnace operated intermittently between 1926 and 1929 when the stock market collapsed sparking America’s Great Depression.

The company’s coal mines and coke ovens at Minersville and Kearney managed to employee several Broad Top area persons while shipping 49,508 tons of coal from Kearney in 1927 and 64,299 tons the following year. A lesser amount of coal was also shipped over the H&BT in 1927.

Coming Up: the loss of the Saxton area iron-producing business had a negative impact on the H&BT, leaving only the Riddlesburg iron operations as a dependable source of income for the railroad.