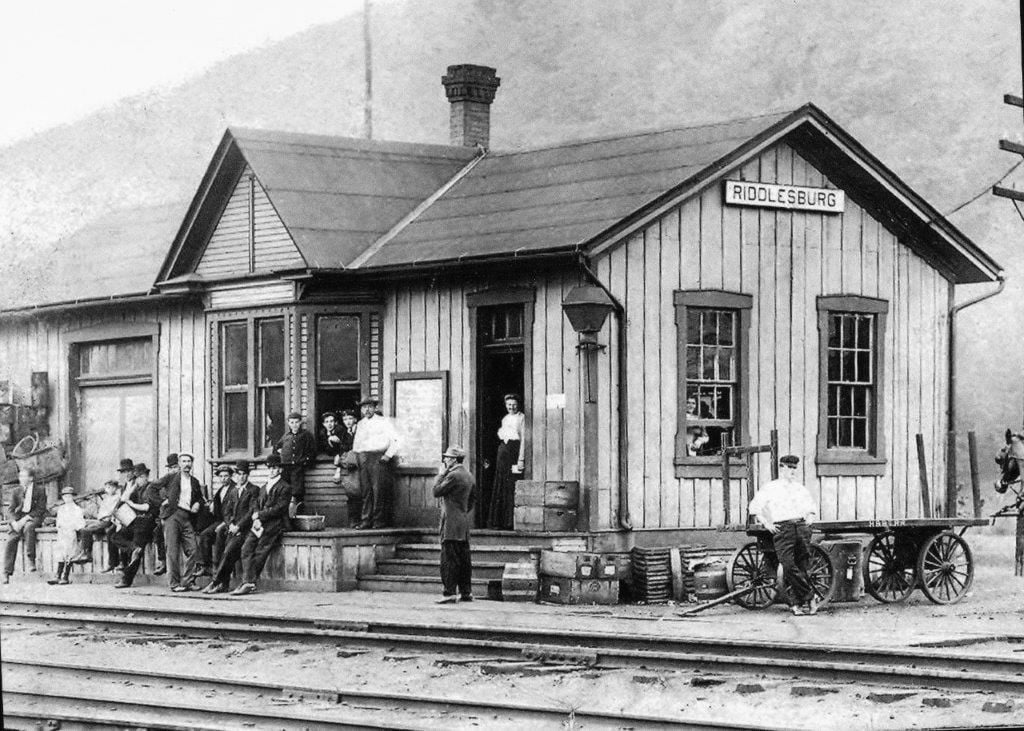 Here’s a scene of the H&BT’s Riddlesburg Depot as it appeared around 1900. In addition to the local iron making and coal mining industries, the H&BT played a major role in the town’s colorful history. 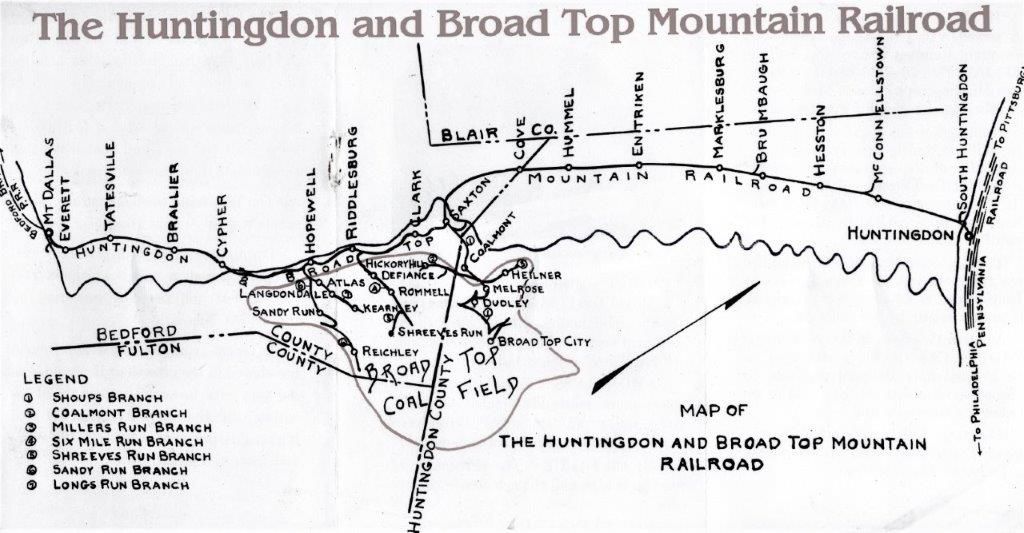 Here’s a map of the H&BT Railroad’s 52-mile right of way between Huntingdon and Everett, along with the railroad’s various branch lines as they appeared around the time of World War I. After the war, the coal mining, ironmaking and railroad industries began a slow but steady decline. Read today’s Echoes from the Past for details.

Here’s a scene of the H&BT’s Riddlesburg Depot as it appeared around 1900. In addition to the local iron making and coal mining industries, the H&BT played a major role in the town’s colorful history.

Here’s a map of the H&BT Railroad’s 52-mile right of way between Huntingdon and Everett, along with the railroad’s various branch lines as they appeared around the time of World War I. After the war, the coal mining, ironmaking and railroad industries began a slow but steady decline. Read today’s Echoes from the Past for details.

As the H&BT geared up for the second decade of the 20th century the nation was slowly recovering from its involvement in World War I. Returning veterans, many of whom worked in the deep mines of the Broad Top and on the East Broad Top, Huntingdon and Broad Top and Pennsylvania railroads found peacetime to their liking while the nation entered a period of prosperity and the “Roaring ‘20s.”

Unaware of what lay ahead, the nation’s railroads were back to normal operation, including the H&BT, which had been overseen by the federal government during the war.

The mines of the Broad Top were busy during the war but as hostilities ended the gradual decline of King Coal on the Broad Top began in earnest. The “king’s” dethroning following World War II set the stage for the collapse of the H&BT which had been struggling with debt and other financial woes dating back to the latter part of the 19th century.

But there was one shining light of hope for the railroad between the Civil War and the early decades of the 20th century: the ironmaking industry at Riddlesburg, Saxton, Minersville, Kearney and Everett, all in Bedford County; and the iron ore mines scattered along Tussey Mountain in Huntingdon County along with numerous sidings that served the agricultural industry up and down Woodcock Valley.

Passenger service and shipment of the U.S. Mail between Huntingdon and Bedford and the railroad’s various branch lines also supported the H&BT, but after World War I the automobile gained in prominence capturing business from the railroad company. Although the H&BT regained some of its passenger revenue during World War II, the late 1940s brought the curtain down on passenger service, followed by the transportation of the U.S. Mail.

Although the Broad Top mines in the counties of Huntingdon and Bedford continued to provide dependable revenue for the H&BT during the first two decades of the 20th century, it was the iron industry on the Broad Top which help keep the railroad’s ledger predictable although disappointing to the company stockholders. Decades later, a perfect storm would claim the life of the century-old standard gauge line.

In the official records (annual reports) of the H&BT board of directors, the importance of the ironmaking industry, particularly at Riddlesburg, was stressed, offering promise for a brighter future.

Railroad company reports for the early decades, including the “Depression Years” of the 20th century, paid tribute to the Riddlesburg ironmaking operation noting, “The Riddlesburg Furnace of the Colonial Iron Company is deserving of special mention for its unfailing efforts to operate during these depressing times, and the tonnage which we have received from them during the past year has indeed been helpful to us.”

But like its predecessors at Saxton and Everett, ironmaking for the company fell from grace in the face of stiff competition, costly transportation rates and the availability of more suitable iron ore from the Great Lakes Region.

The slow but steady decline of the industry in Broad Top Township, which also included deep mines in the Six Mile Run, Riddlesburg and Kearny areas, started for the Colonial Iron Co. around 1904 following the close of the Saxton Furnace Co. operations.

Aware of the need to modernize the Riddlesburg operation the company’s two older furnaces, erected between 1869-1872, were dismantled and a new single furnace erected along with various other improvements including the construction of additional coke ovens, all to the delight of the H&BT financiers and board members.

Established in 1899, the iron company provided employment to area miners and furnace employees while boosting revenue for the H&BT via its Six Mile Run, Sandy Run and Long’s Run branches. With the modernization of the Riddlesburg operation the railroad and local mining industry envision future growth despite the nation’s faltering financial picture.

Placed in blast in 1912, about the time the present day (restored) Riddlesburg coke ovens were erected near the H&BT’s Six Mile Run branch, the operation remained stable until 1929. That year crippling miners’ strikes on the Broad Top and the Oct. 21 stock market crash delivering a blow to the ironmaking business on the Broad Top while negatively impacting the H&BT’s growing financial griefs.

On Nov. 1, 1929, the Riddlesburg iron production business came to a sudden halt, depriving the Colonial Iron Co. of dependable revenue. Although the deep mines and the sale of local pig iron helped keep the company afloat it wouldn’t be until the introduction of President Roosevelt and the U.S. Congress’s Reconstruction Finance Corp. (RFC) that the Riddlesburg operation saw reason for hope.

Thanks to an RFC $110,000 loan the iron company proposed reopening the furnace complex that would generate over 350 local jobs. In May of 1937 the furnace went back into blast, lasting for about six months. However, unable to keep up with payments on the loan, the RFC assumed oversight of the property. Not long afterwards, the celebrated Colonial Iron Co. was dissolved.

America was preparing to enter World War II at a time when the demand for iron, steel and coal jumped dramatically. The New Jersey-based company set up a subsidiary to operate the Riddlesburg business known as the Riddlesburg Coal & Iron Co.

The projected grand re-opening of the Riddlesburg multiplex, set for spring of 1940, was not only good news for local ironworkers and coal miners, but a long-awaited reprise of rail shipments over the H&BT whose managers help spearhead the proposal.

Philadelphia railroad company officials, accompanied by iron industry leaders, traveled to Riddlesburg via the PRR and H&BT to help celebrate the official re-lighting of the furnace, capturing the headlines of area newspapers.

The new company managed to keep the furnace complex in operation during the early years of World War II as shipments via the H&BT helped generate badly needed revenue for the railroad which again had been taken over by the U.S. government, as were other railroad’s across the nation.

However, failed efforts by the RFC to embolden the company to attain the Riddlesburg operation, along with alleged “informal talks” to unionize the local company, the operation went out of blast in the spring of 1943. Once again, the H&BT found itself behind the eight ball, financially speaking.

With victory in Europe and the Pacific secured, World War II concluded with the demand for pig iron and Broad Top coal plummeting, setting the stage for the H&BT and King Coal’s last hurrah.

Much of the Riddlesburg ironmaking complex was sold at a well-advertised auction on April 18, 1944 for salvage.

And while the iron furnace at Riddlesburg would no longer emit its multi-colored haze into the skies of western Broad Top, attempts to utilize the nearby coke ovens to produce coke proved marginally successful for well-known New York businessman Baronig Baron (through the creation of the Riddlesburg Mining Co.) shortly after the close of the war.

As part of the effort to produce coke at Riddlesburg and efforts to revive the faltering coal mining and railroading industry on the western side of Broad Top Mountain, several local mines were reopened or expanded during 1948. Among the promoters were principal investors and managers of the H&BT who were facing bankruptcy and limited recovery blueprints on the table.

By Aug. 1, 1949, the old Riddlesburg furnace was sold for scrap with the nearby 48 beehive coke ovens experiencing limited success during the first two years of the 1950s.

During the early 1950s as the H&BT neared its demise noted Bedford and Huntingdon County mine operator R. Richard Eichelberger leased the coke ovens from Baron and produced coke into mid-1953, after which the business closed marking the end of the industry on the Broad Top.

Coming Up: The conclusion of the H&BT series with a brief look back at attempts to save the local mining business and efforts by railroad officials to reorganize the century-old, coal-hauling line.