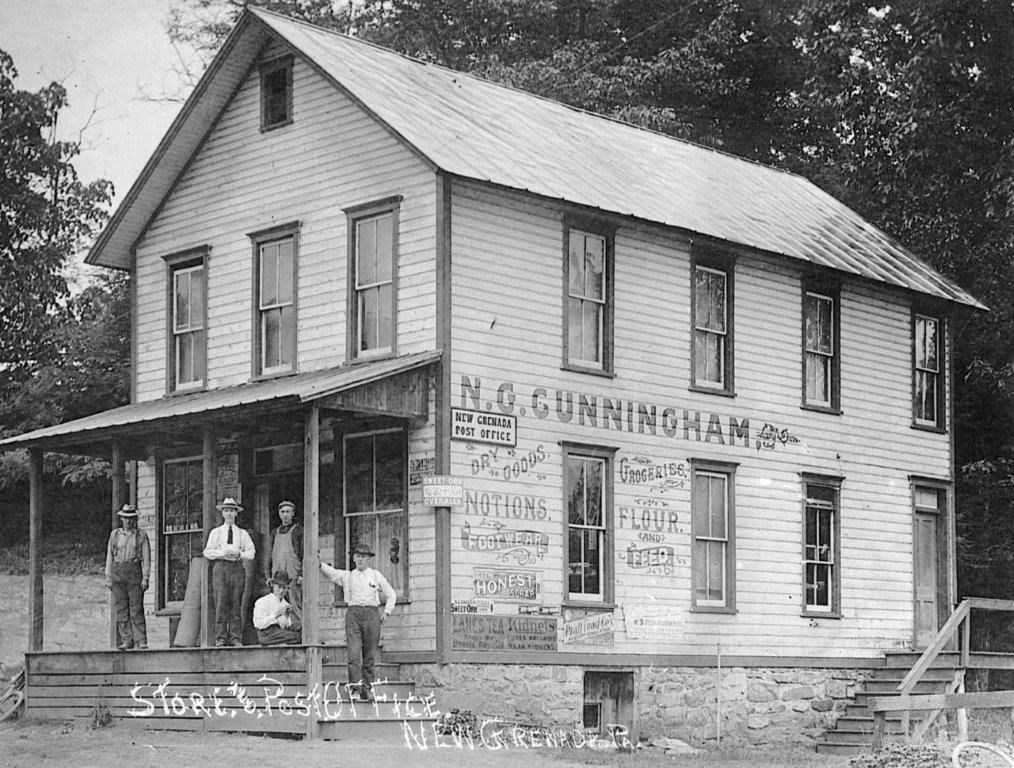 A well-known landmark in the Fulton County community of New Grenada is this store building which still stands in the center of town. The undated photo shows a group of people standing in front of the N.G. Cunningham Store which offered groceries, flour, feed, footwear, dry goods and much more. Also located in the building was the community’s post office. 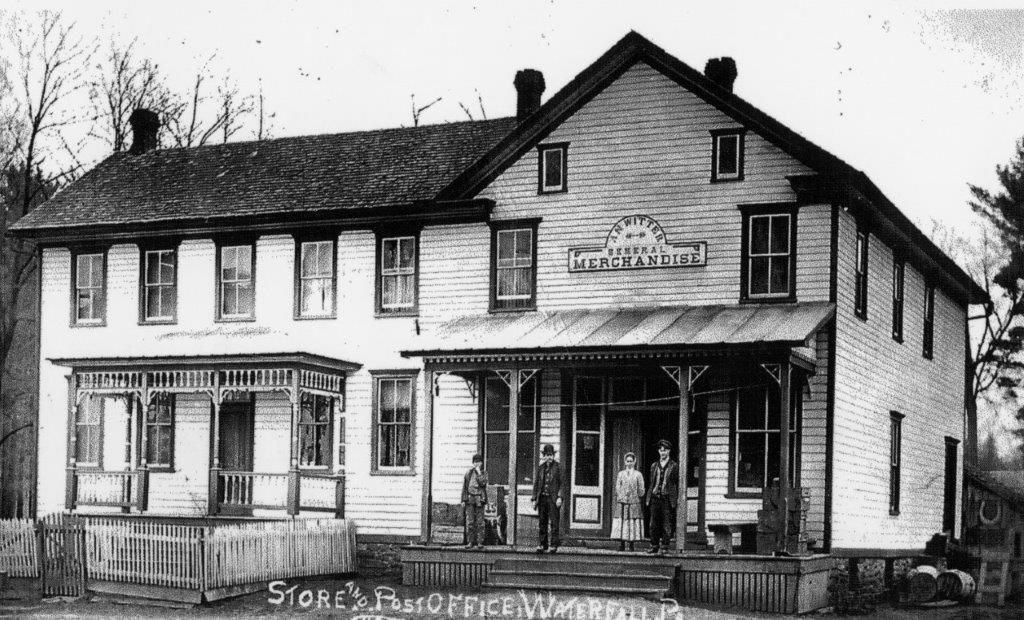 Here’s an undated photo of the well-known Waterfall Store, located at the center of the small Fulton County community. Today, the building houses Newman’s Market. Read about the store, Waterfall, and nearby Wells Valley, New Grenada and Wells Tannery in today’s Echoes from the Past.

A well-known landmark in the Fulton County community of New Grenada is this store building which still stands in the center of town. The undated photo shows a group of people standing in front of the N.G. Cunningham Store which offered groceries, flour, feed, footwear, dry goods and much more. Also located in the building was the community’s post office.

Here’s an undated photo of the well-known Waterfall Store, located at the center of the small Fulton County community. Today, the building houses Newman’s Market. Read about the store, Waterfall, and nearby Wells Valley, New Grenada and Wells Tannery in today’s Echoes from the Past.

At the beginning of this series the columnist underlined the brief history of northern Fulton County in response to a new exhibit being added at the Broad Top Area Coal Miners Museum at Robertsdale.

Although there was no coal mining implemented in the communities of Wells Tannery, Wells Valley and the New Grenada/Waterfall area, this part of the county did have important connections with the Broad Top mining industry. I wrote about the Reichley Brothers logging railroad’s connections with deep mining and the H&BT railroad in Broad Top Township, Bedford County, and the logging lines’ contribution to the Wells Valley and nearby Sideling Hill/Rays Hill area.

I also pointed to the laying of the right of way of the still-born South Penn Railroad envisioned during the early 1880s as a competitive response to the Pennsylvania Railroad’s monopoly on the region’s coal and iron industries and other important businesses. Decades later, the Depression-era Pennsylvania Turnpike was successfully built over the old South Penn route which passed through Huntingdon, Fulton and Bedford counties, including several local tunnels.

Assisting in both the South Penn and turnpike endeavors were Broad Top area coal miners who worked on the nearby tunnels of Rays Hill and Sideling Hill, and to a lesser degree, the Tuscarora and Blue Mountain tunnels. Local miners found work at the tunnels plentiful during the summer months when coal production on the tri-county Broad Top was not in seasonal demand.

Wells Valley, which stretches southeast of Wells Tannery in the direction of New Grenada and Waterfall, both in northeastern Fulton County, remains today a peaceful and scenic agricultural area, resting at the bottom of Wray’s (Hill) Mountain, also known as the eastern flank of the Broad Top Coal Field.

The eastern side of the mountain stretches from the Joller/Coles Valley (former) mining area of Huntingdon County west into Fulton County (often referred to as Groundhog Valley and/or Coles Valley depending on your understanding of the local geography).

In concluding this series, what follows are some brief observations about the communities of New Grenada and Waterfall area. As noted before, New Grenada has special meaning to this writer since he was born there on Feb. 22, 1946, residing in the home of his grandparents, the late John and Celia Watkin for several years.

Early history books tell us that Wells Valley was named after a man by the last name of Wells who migrated to the area around 1760 from Baltimore, Md. It is also reported that the first permanent settler of the valley was Alexandria Alexandria who arrived around 1772, followed by more settlers in the mid-1780s.

Rural Wells Tannery sprouted up on the far western end of Wells Valley near the foot of the Broad Top Coal Field about a half decade before the American Civil War. With its dependence on local logging and sawmill operations as well as nearby agricultural interests, Wells Tannery gained fame with the opening of a large tannery by the firm of Lyon & Petterson which changed hands several times between 1870 and the end of the 19th century.

In time, merchandise businesses, a post office and several churches sprung up in and near the community as the logging and tannery industries advance.

To the northwest of Wells Tannery settlers entered present-day Sherman Valley which stretches around the extreme southwestern corner of the Broad Top Coal Field, situated in the Kimber Mountain area of Broad Top Township, Bedford County. Near the far western end of Sherman Valley is Cypher, a well-used stop on the Huntingdon and Broad Top Mountain Railroad and the location of a 350-ft.-long railroad trestle which still spans the Raystown Branch of the Juniata River (present day H&BT Rail Trail).

About halfway between Wells Tannery and the Grenada/Waterfall area lies the very small hamlet of Enid situated at the base of (take your pick) Broad Top and Wrays (Hill) Mountain, also listed on maps as Enid Mountain. Paralleling Wells Valley to the south is Sideling Hill which extreme northern terminus adjoins the Juniata River in the Mill Creek area of Huntingdon County.

New Grenada, which lies at the base of (take your pick) Broad Top, Wrays and New Grenada mountains, was once the location of a tub mill, dating back to the late 1790s. Over the years, the town included a large, two-story store (which original building remains today), a church (still in existence and sided by a small graveyard), a blacksmith shop and other small businesses and homes.

It should be noted that near the close of the American Civil War oil exploration was launched in the New Grenada area but after a short period of time the search proved unsuccessful.

About a mile east of New Grenada the small town of Waterfall survives near the intersection of Huntingdon and Fulton counties. Separating Waterfall from New Grenada is Sideling Hill Mountain and a “cut” in the mountain, splitting Wells/Coles and Groundhog valleys from the Waterfall area. On the eastern side of the New Grenada/Waterfall region flows the sparkling-clear waters of Sideling Hill Creek in which several smaller mountain streams empty into including Roaring Run.

The small community of Waterfall, situated at the intersection of routes 913 and 655 in Taylor Township, Fulton County, is still the home of several businesses including a bank, auto/body shop repair business, post office and a time-honored “old-time” store.

Still operational today, the popular Newman’s Market at Waterfall reflects many decades of faithful service to the community. Operated by several families over the years (the community’s post office once operated out of the building prior to the construction of a new, modern building in the early 1960s), the present-day store is situated at the center of town directly across from the old Knepper Feed Mill, a mainstay of the village for over a century.

The history of Waterfall dates to about 1770, when a man by the name of Benson erected a wilderness log cabin along nearby Sideling Hill Creek. More settlers would follow with the community earning permeance around 1800.

With the arrival of brothers Wilson and Lewis Bergstresser in the mid-1800s the town gained fame for its grist mill, mill race, sawmill, blacksmith shop, school, church, and a store erected in 1860 by Michael Barndollar.

The present-day store is believed to have been erected around the start of the 20th century by the town’s first postmaster, Wilson Bergstresser, who was appointed in 1880.

The origin of the town’s name has been debated by several sources over the years, but it is generally accepted that the village officially became Waterfall on Feb. 28, 1884.

During the early days of northern Fulton County, numerous one-room schools and churches were erected between Waterfall and Wells Tannery, to numerous to mention in this column. Several time-honored churches survive today, helping to promote the region’s scenic and colorful history and heritage.

When the Coal Miners Museum reopens for the season (hopefully) later this spring, stop by and check out the new exhibit which will dramatize the important history and natural beauty of the northern part of Fulton County and its direct and indirect connections with its neighbors on Broad Top Mountain