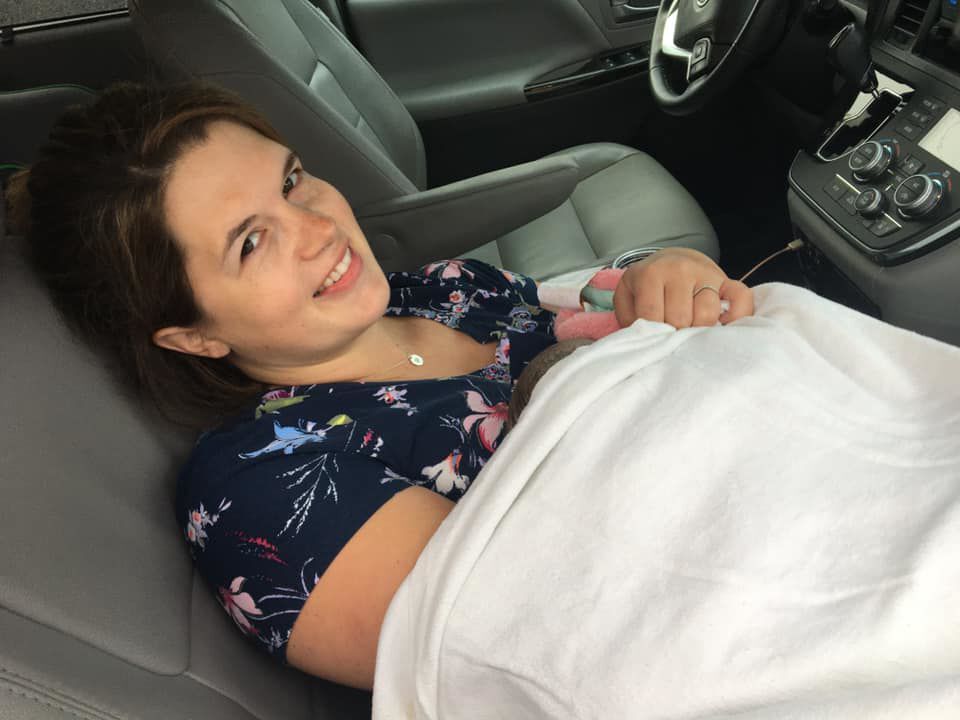 Lindsay McCracken of Huntingdon cradled her newborn daughter, Felicity Jo, minutes after she gave birth in the family van. Lindsay’s husband Johnny delivered his daughter in the parking lot of the Stone Creek Fire Department when it became clear that Felicity was not waiting for a normal hospital delivery room. 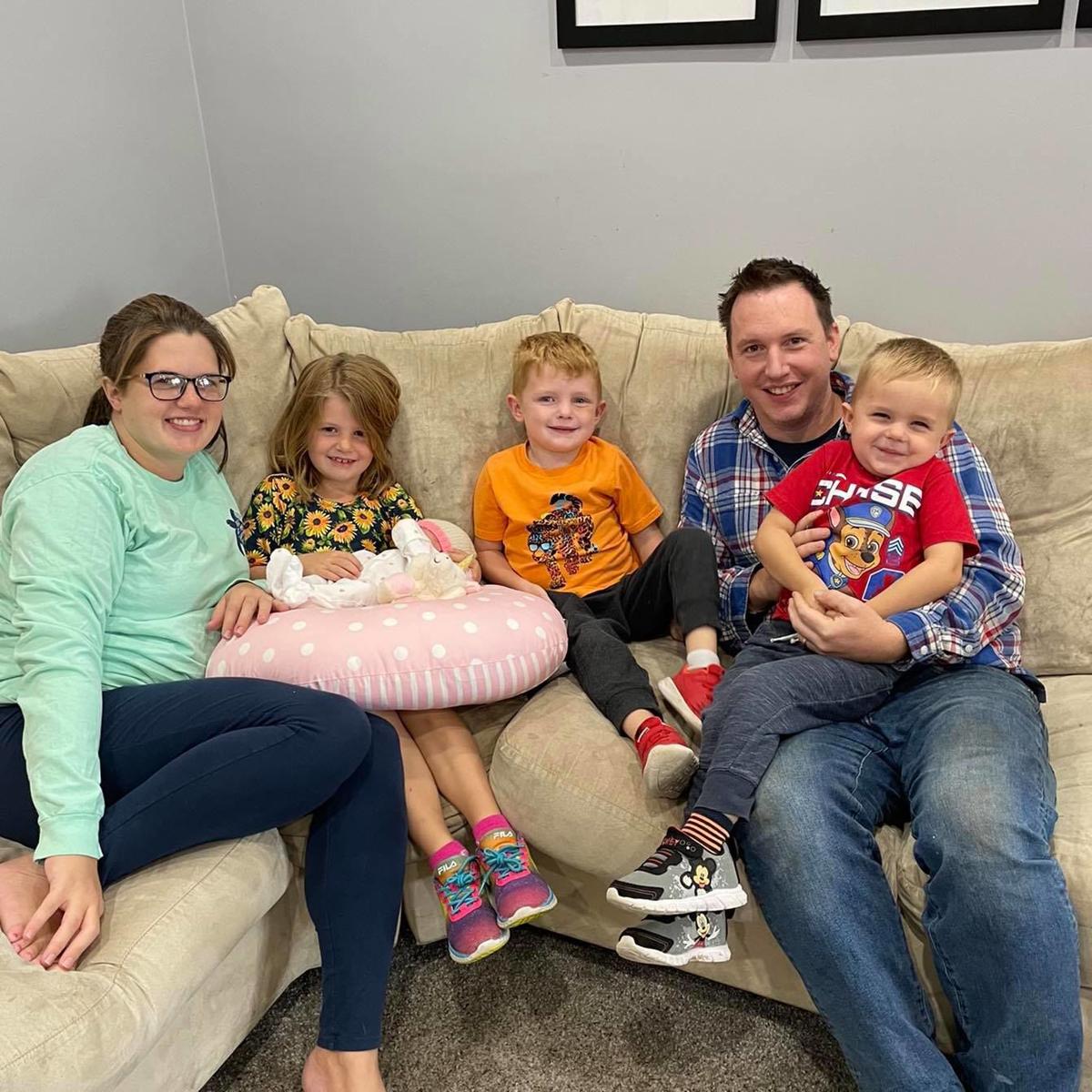 Felicity Jo McCracken is surrounded by her loving family, mom Lindsay, big sister Korynne, brothers LJ and Elias and dad Johnny. Felicity is taking it easy on her mom and dad since being released from the hospital after causing a bit of a panic during her speedy birth.

Lindsay McCracken of Huntingdon cradled her newborn daughter, Felicity Jo, minutes after she gave birth in the family van. Lindsay’s husband Johnny delivered his daughter in the parking lot of the Stone Creek Fire Department when it became clear that Felicity was not waiting for a normal hospital delivery room.

Felicity Jo McCracken is surrounded by her loving family, mom Lindsay, big sister Korynne, brothers LJ and Elias and dad Johnny. Felicity is taking it easy on her mom and dad since being released from the hospital after causing a bit of a panic during her speedy birth.

A common fear among mothers-to-be, is not being able to make it to the hospital in time to deliver the baby. While for most, it’s an unnecessary concern, there are some who go into labor somewhere other than a hospital.

According to the latest research, only around .15% of babies in the U.S. are born before their mom’s arrival at the hospital.

A Huntingdon couple recently beat those odds as their daughter, seemingly not at all interested in waiting for a delivery room, opted for mom and dad’s minivan.

When Lindsay and Johnny McCracken went to bed Sept. 28, they had no idea what an adventure the following day would be. Nine months pregnant, Lindsay was scheduled to be induced Friday, Oct. 1. However, when she woke up Wednesday morning she was having contractions that were about six minutes apart. She called the answering service at her doctor’s office and told them what was going on.

“I was waiting for a call back, but the contractions were consistent, so I called back to let them know we were coming,” she explained.

Her mother arrived to stay with their two youngest children, while she and Johnny loaded up the van and dropped their daughter, Korynne, off at school. Then it was off to Mount Nittany Medical Center in State College. However, as they drove, things seemed to be progressing rather quickly. Johnny told his wife, “You have to wait, we can’t do this in the car.” But the newest McCracken had other plans.

Lindsay said that as they approached Jackson’s Corner, she told her husband he needed to call 911 because they weren’t going to make it to the hospital.

“As he was on the phone with 911, my water broke, and I could tell she was coming. He told the dispatcher we would be pulling into the fire company (Stone Creek Valley Fire Company) parking lot in McAlevys Fort.”

When Johnny hung up the phone, thoughts were swarming though his mind.

“I thought, ‘Oh no! What am I going to do?... I hope the ambulance is going to be there...This wasn’t the plan,” recalled Johnny.

Lindsay said all she could think was, “‘Lord, please get us to the hospital,’ but God knew and he protected us.”

Once the van stopped, however, there was little time for thinking.

“We pulled into the parking lot, Johnny came around to the passenger side and two pushes later, we had a baby!” exclaimed Lindsay.

Though he may have been understandably panicked beforehand, Lindsay said when it came time to actually help her deliver the baby, he took it in stride. “He didn’t hesitate for one second in the moment. He delivered his baby girl.”

Felicity Jo McCracken was born at 8:13 a.m, just five minutes after her daddy placed the call to 911. Lindsay said she made sure to look at the clock in the van because she needed to know her time of birth.

A few moments later, a member of the fire company arrived with blankets and made sure they were okay. Soon, other members arrived and the ambulance got there about 10 minutes later.

“The ambulance took Felicity and I to the hospital and Johnny cleaned up the van a little bit, then joined us. We got checked out and admitted to the hospital and, by the grace of God, both of us were doing really well. No complications or any issues.

“Many thanks to the Stone Creek Valley Fire Company and the Twin Creeks Ambulance Service for their help,” she added.

If the story wasn’t heart-warming enough already, Felicity is also a rainbow baby. Her mama explained, “She was born 15 months to the day we found out we lost Lennon. So the 29th went from a hard day to a sweet day — for both babies.”

Michelle can be reached at mehresman@huntingdondailynews.com.