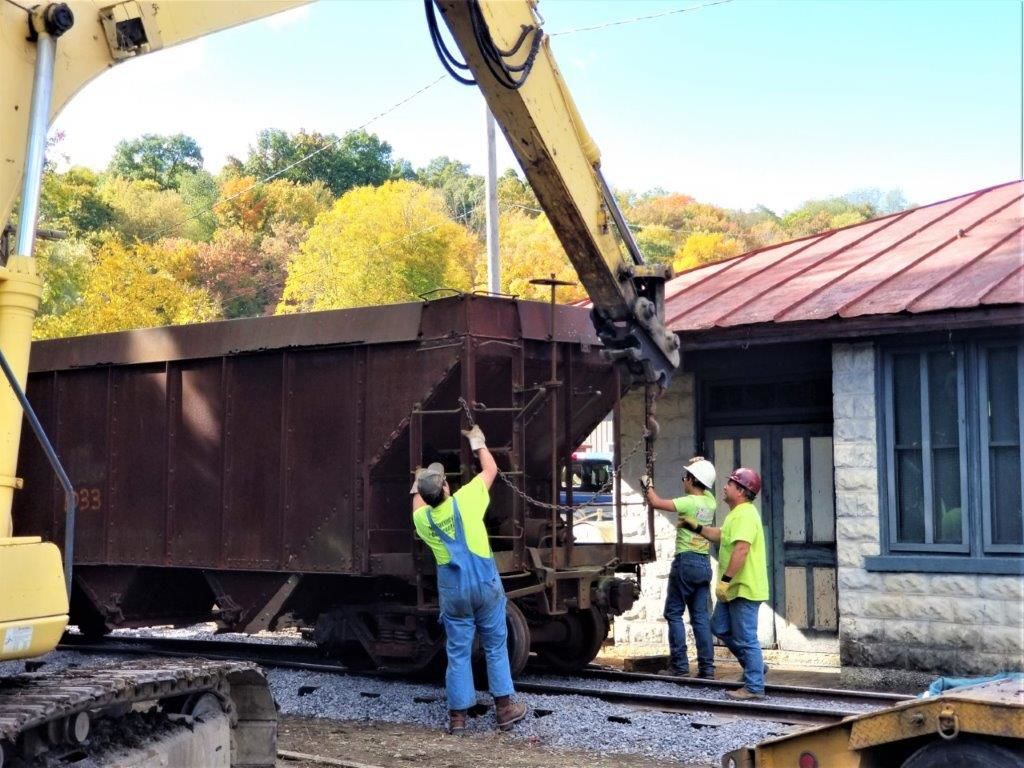 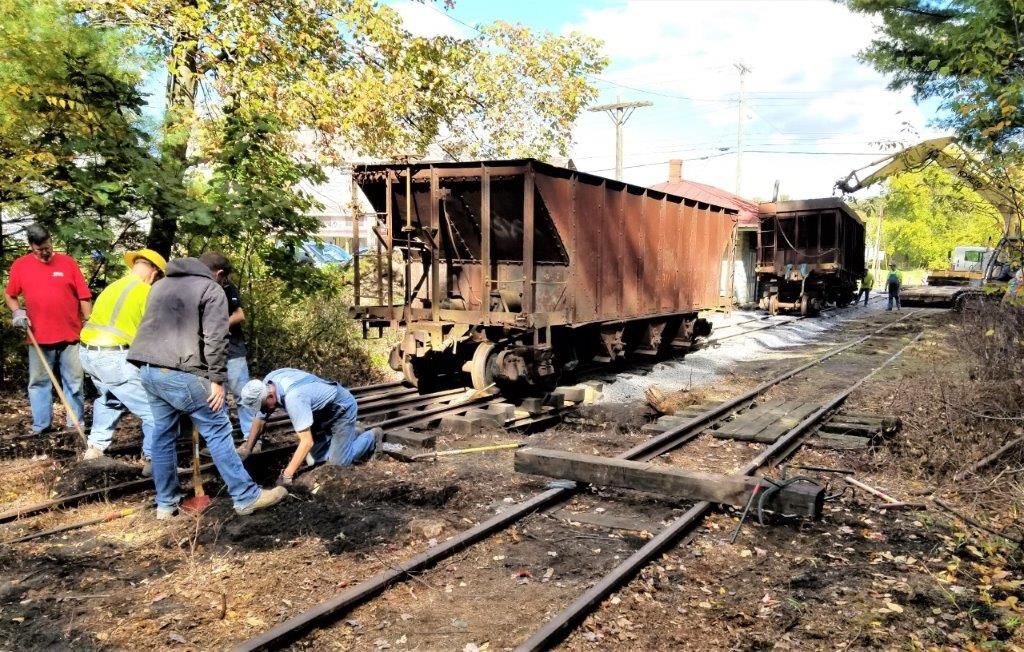 East Broad Top Railroad Foundation workers and members of the Friends of the EBT prepared trackage at Robertsdale Thursday for the arrival of several original coal hoppers that once hauled the semi-bituminous coal from the mines at Robertsdale and Wood to the Pennsylvania Railroad at Mount Union. The original EBT depot, a part of the FEBT’s Museum Complex, and next door (former) Robertsdale post office, are being readied for a grand opening in 2021.

East Broad Top Railroad Foundation workers and members of the Friends of the EBT prepared trackage at Robertsdale Thursday for the arrival of several original coal hoppers that once hauled the semi-bituminous coal from the mines at Robertsdale and Wood to the Pennsylvania Railroad at Mount Union. The original EBT depot, a part of the FEBT’s Museum Complex, and next door (former) Robertsdale post office, are being readied for a grand opening in 2021.

After 64 years of slumber, several of the memorable narrow-gauge coal hoppers of the East Broad Top Railroad have returned to the former mining hamlet of Robertsdale.

Thursday, two of five original EBT coal hoppers to be placed on the town’s historical “company square,” were transported from the EBT rail yards at Rockhill on flat bed trucks by employees of G&H Anderson Excavating LLC of Three Springs. Additional EBT coal hoppers will be moved to the Wood Township community in the future as part of the new EBT Foundation Inc.’s multi-phase restoration of the EBT.

The famed National Historic Landmark property was sold by longtime EBT owners, the Kovalchick family of Indiana, Pennsylvania, with EBT preservationists announcing this past Valentines’ Day the return to service of the popular steam train in 2021.

Three EBT coal hoppers will be on display on the rehabilitated narrow-gauge rails with plans to move additional cars to the EBT Wye at Robertsdale as the foundation continues its restoration work at the railroad’s headquarters at Rockhill. Both FEBT and foundation personnel have been busy since February preparing the railroad for its return to service.

“These are exciting times on the EBT,” remarked Andy Van Scyoc, FEBT president, who paid tribute to the FEBT membership whose numbers have grown to 1,318 since the announcement of the EBT’s return to service.

The FEBT president reported that although the nonprofit organization will be continuing its cooperative activities and restoration work at Rockhill and Robertsdale, the COVID-19 pandemic has forced the group’s annual fall reunion to go virtual over the upcoming Columbus Day weekend.

“The focus has been on getting things done to allow us to open the (Robertsdale) museum for next year’s (EBT) operating season,” said the FEBT chief. “We have also moved the museum store from the (EBT station at Robertsdale) to the former post office and continue to work on display boards that will be the focus of the museum.”

EBT enthusiasts began clearing right of way from the EBT depot at Robertsdale to the old No. 1 coal mine, about 75-ft. south of the depot in mid-September, followed by rehabilitation of the original narrow gauge rails and the installation of new trackage along side the depot where the hoppers filled with Broad Top coal were weighed on a large scale in preparation for their departure to Rockhill and Mount Union.

“The track restoration was completed in the Robertsdale yard for the first time since common carrier service ended in 1956,” continued the FEBT president. “The intent of the trackage is to allow for the display of EBT hopper cars, in conjunction with the FEBT’s museum complex work.”

When the coal hoppers left Robertsdale March 31, 1956, they traveled over the rusty rails of the EBT, but Thursday’s return of the vehicles involved the use of large trucks pulling flat beds carrying the coal hoppers.

The trip from Rockhill included a climb up the towering Wrays Hill (New Grenada-Robertsdale Mountain) to Robertsdale where the hoppers werehad to carefully maneuver through an ongoing two-lane bridge replacement project at the center of Robertsdale. Upon their arrival, the aged cars were backed into the FEBT property and moved off the flat beds onto the rehabilitated EBT tracks.

Workers will be busy over the next several weeks making repairs and repainting the hoppers, noted the FEBT chief.

The FEBT Museum Complex is located along state Route 913 on the “company square” where three of the original EBT/Rockhill Coal Co. buildings survive. They include the EBT depot, former Robertsdale post office and the Rockhill Coal Co. building which currently houses the existing post office. The old Robertsdale “company store,” one of the first buildings erected in the new coal mining town in 1873-74, was razed in 1997.

Closely adhering to COVID-19 pandemic guidelines FEBT workers have been busy readying their two museum structures for a grand opening next year. Limited work sessions will continue this fall.

Meanwhile, the EBT Foundation, as well as FEBT volunteers have been busy rehabilitating numerous railroad structures at Rockhill ranging from the boiler shop and foundry to restoration of several EBT steam locomotives and the right of way trackage from Rockhill to Colgate Grove at Shirleysburg. The work is being guided by EBT Foundation general manager Brad Esposito and a very enthusiastic and talented work crew.

Although the FEBT’s popular fall reunion has been replaced by a limited virtual event, three speakers are scheduled to take part in the Columbus Day weekend including, Henry Posner, chairman of the EBT Foundation, Dave Domitrovich, chief mechanic officer of the foundation and railroad modeler Ron Pearson who will speak discuss, “Searching for the Lost Robertsdale Coal Mines and Coal Cleaning Plant.”

Also, on tap for the Columbus Day weekend is the annual Broad Top Coal Miners “Heritage Days,” at the Coal Miners Museum in Robertsdale. The annual event is sponsored by the nonprofit Broad Top Area Coal Miners Historical Society.