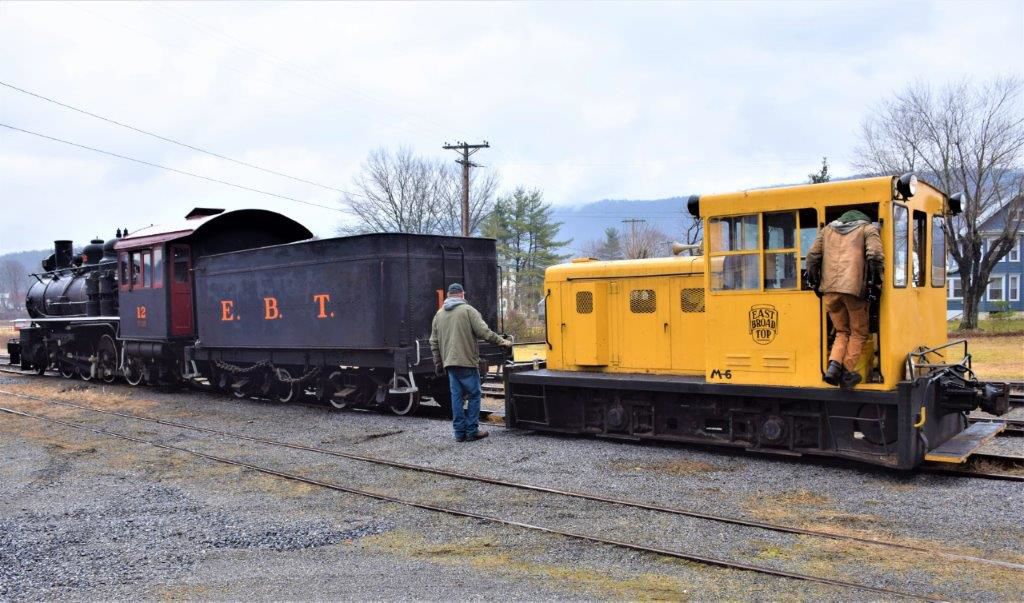 Worker prepared EBT steam locomotive No. 12 and other rolling stock for this morning’s long-awaited announcement that the narrow gauge tourist railroad is returning to service. EBT fans and officials of the newly formed EBT Foundation Inc. gathered at Rockhill for a press conference announcing the news. 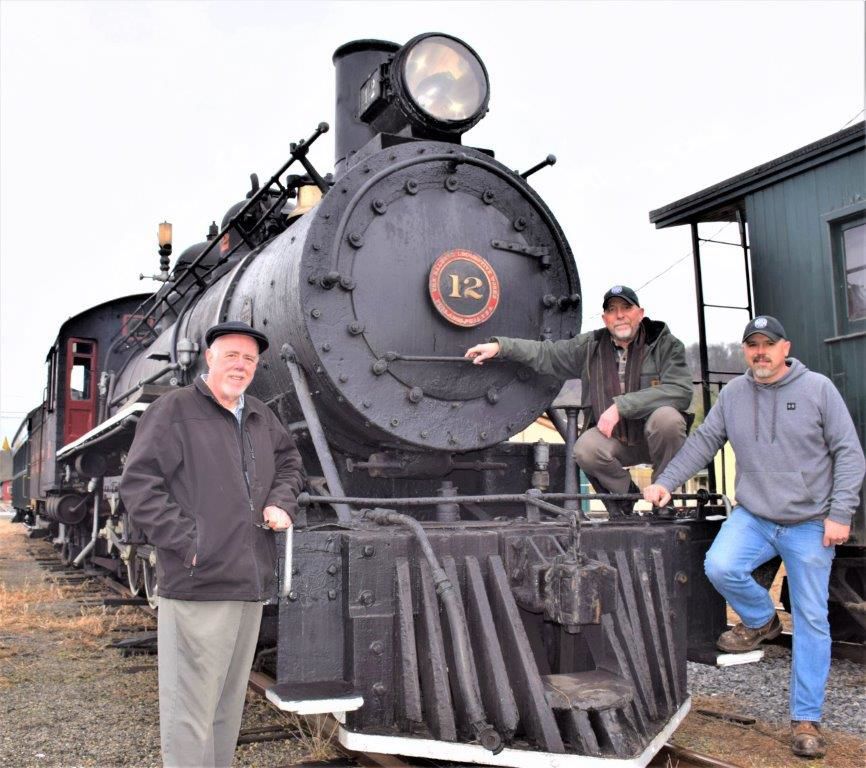 Worker prepared EBT steam locomotive No. 12 and other rolling stock for this morning’s long-awaited announcement that the narrow gauge tourist railroad is returning to service. EBT fans and officials of the newly formed EBT Foundation Inc. gathered at Rockhill for a press conference announcing the news.

After years of anticipation, EBT railroad fans applauded word Friday morning that the narrow gauge railroad has been purchased by a new owner, a nonprofit foundation known as the EBT Foundation Inc., with plans to offer limited on-site activities this year followed by full operation in 2021.

Fans gathered at a press conference in Rockhill this morning to listen to the new owners outline the future of the 146-year old former coal-hauling line turned tourist train. Ironically, the reopening of the EBT falls on the heels of the railroad’s 60th anniversary marking its switch from common carrier service to a tourist-hauling line in 1960.

Closed since 2011, the National Historic Landmark is scheduled to reopen on a limited basis as a tourist operation this year, probably using the very popular gas-electric M-1 gas-electric car and selected rolling stock with plans to fully operate in 2021, using at least one steam-powered locomotive.

Rail fans learned this morning that EBT Foundation Inc. acquired 27 miles of the original 33-mile-long narrow gauge right of way between the southern end of the concrete-arch Aughwick Bridge in Shirley Township to the Robertsdale/Wood area in Wood Township, all in Huntingdon County. The purchase also included the EBT’s rolling stock, six steam locomotives, railroad complex at Rockhill and related equipment. The purchase does not include the active mining area on Broad Top Mountain.

The purchase price and other financial details of the sale were not disclosed.

“This is the best possible outcome for the railroad, which has been in my family for two generations,” remarked Joseph Kovalchick, whose father, Nick Kovalchick, purchased the East Broad Top Railroad and Coal Co. in 1956, following the collapse of the coal mining industry on the Broad Top. “It is with a combination of pride and relief that we pass the (EBT) torch in its second reincarnation.”

Continued Kovalchick, “But it is clear that a for-profit business model is not sustainable (and) our faith in the new model is reflected in both the sale and the Kovalchick family’s ongoing role on the board of the new nonprofit.”

Initial plans call for reopening the EBT from Rockhill to the Colgate Grove picnic area, near Shirleysburg, offering the familiar 12-mile round trip train ride between the two southern Huntingdon County communities. The first phase of the reopening project also involves reconditioning several of the six steam locomotives and rolling stock as well as needed rehabilitation of the right of way.

Asked about future restoration of the line to Robertsdale and Mount Union, nonprofit organization officials were cautiously optimistic but stressed that the initial goal is to reopen the train excursions between Rockhill and Colgate Grove and reconditioning the EBT steam locomotives and rolling stock.

Incorporated as a nonprofit foundation in January 2020 to acquire, preserve and operate the EBT, the EBT Foundation Inc. will immediately launch a major overhaul of the railroad’s track and equipment including locomotives and passenger cars as well as the installation of a fire-suppression system in the historic machine shops and roundhouse. Other improvements include several structural stabilization projects at the railroad’s Rockhill Furnace complex.

The EBT’s new general manager, Brad Esposito, a 20-year veteran of the Buffalo & Pittsburgh Railroad, a Genesee & Wyoming Inc. company, said the foundation has a three-fold mission and commitment: first to preserve and operate the EBT as a steam railroad; second, to educate visitors about the role of railroads in local and national history; and third, to promote local and regional tourism and economic growth.

“The foundation is proud to be a part of efforts to bring the EBT back to life,” Esposito told The Daily News. “We are anxious to get started this year with limited activities to be followed by bigger things for next year.”

The foundation has started planning a special open house eyed for June 6, the Orbisonia-Rockhill Homecoming set for July 22-25 (the 60th anniversary of the reopening of the railroad as a tourist line in 1960) and the Friends of the EBT annual Reunion set for a return to the Columbus Day weekend in October.

Esposito, along with other officials of the new nonprofit organization, outlined the EBT’s future while signaling out several important partners in the endeavor, chief among them, the widely-respected Friends of the EBT (FEBT) and the Rockhill Trolley Museum which continues to operate electric trolleys over the former Shade Gap branch of the EBT.

The FEBT, which has played a major role in various stabilization, restoration and maintenance of the EBT property at Rockhill, along with two of its own railroad-related structures at Robertsdale, will continue to be a helpful partner in the EBT’s future, noted Esposito, who also recognized the trolley museum as a major supporter to the railroad’s survival.

In addition to Esposito, who was one of the leaders in the effort to purchase the EBT, other noted EBT supporters and board members were recognized, including David Brightbill, longtime EBT employee and volunteer at the Rockhill Trolley Museum; Lawrence Biemiller, a member of the FEBT board of directors; EBT enthusiast Stephen Lane of southern Huntingdon County; and Jane Sheffield, executive director of the Allegheny Ridge Corp. (ARC).

The backers of the new organization include three rail-industry and rail-preservation leaders: Wick Moorman, former chairman and CEO of Norfolk Southern and former CEO of Amtrak; Henry Posner III, a former Conrail manager who serves as chairman of the Iowa Interstate Railroad and the Railroad Development Corp. of Pittsburgh; and Bennett Levin, a retired mechanical and electrical engineer who owns the Juniata Terminal Co. and operates two Pennsylvania Railroad E8 diesel locomotives and three private cars. Moorman is serving as president of the new organization.

The reinvigorated push to preserve and promote the EBT will also involve several advisers, including Linn Moedinger, former president of the Strasburg Railroad, considered to be one of the most successful tourist railroads in the United States; and Rod Case, a partner at the consulting firm Oliver Wyman who leads their railroad practice.

Among the organizations offering support for the project is the Allegheny Ridge Corp. which manages the region’s state-designated east-west Heritage Area corridor that cuts through Huntingdon County.

“The East Broad Top Railroad is a unique national treasure unmatched anywhere in the United States,” remarked Esposito. “It has been impressively preserved for over 60 years by the Kovalchick family. We are excited to pick up the torch and ensure that the railroad is preserved for future generations.”

The EBT is recognized as the only original narrow gauge railroad surviving east of the Rocky Mountains and considered by railroad enthusiasts and professionals alike as one of the world’s finest preserved railways.

“The railroad’s shops, which date back to the 1880s and greatly expanded from 1905 to 1907, is among the most complete early-20th century industrial facilities anywhere in the U.S.,” added Esposito.

Biemiller cited the project as an exciting one for EBT fans and noted that the foundation is anxious to get started, but cautioned it still has a long way to go, remarking, “We are determined not to make promises we can’t keep.”

Brightbill is also looking forward to the hard work that lies ahead, remarking that the foundation is committed to working with other historical groups.

The EBT was chartered by the Pennsylvania legislature in 1956, with construction beginning in 1872. Passenger service was started between Mount Union and Rockhill Furnace a year later followed by the start-up of coal trains arriving in Robertsdale in late 1874. Seventeen years later, the EBT began transporting semi-bituminous Broad Top coal from the new mining town of Woodvale.

The railroad saw its ups and downs through the early part of the 20th century but closed in 1956 with the collapse of the coal mining industry, only to reopen on six miles of its original right of way between Rockhill and Colgate Grove in 1960-61.

Most of the EBT’s narrow gauge rails remain intact between Mount Union and the Broad Top.

The new nonprofit organization is not associated with the East Broad Top Railroad Preservation Association which owns the section of the EBT right of way between Aughwick Bridge and Mount Union.

The EBT ceased tourist operations Dec. 23, 2011, although the FEBT volunteers continued stabilization and restoration projects and occasional public tours of the EBT complex.

Great to hear this. What happened to the rail work from Mount Union to the Industrial Park in standard gauge?