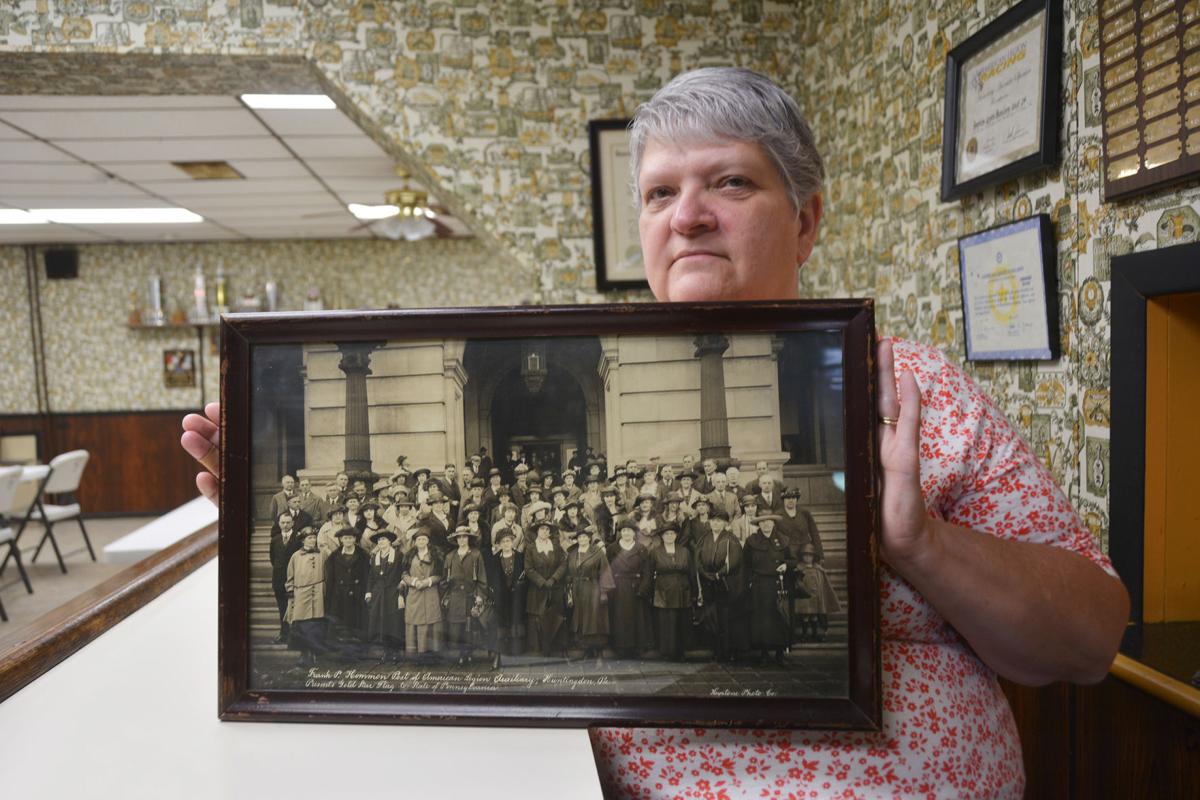 Jody Forsythe Honstine, president of American Legion Auxiliary Unit 24 in Huntingdon, says the organization is 100-plus years into its mission to support the Legion and local veterans. In her hand is a photo of some of Unit 24’s original members on the steps of the state Capitol in Harrisburg — a group whose legacy Honstine was to preserve. 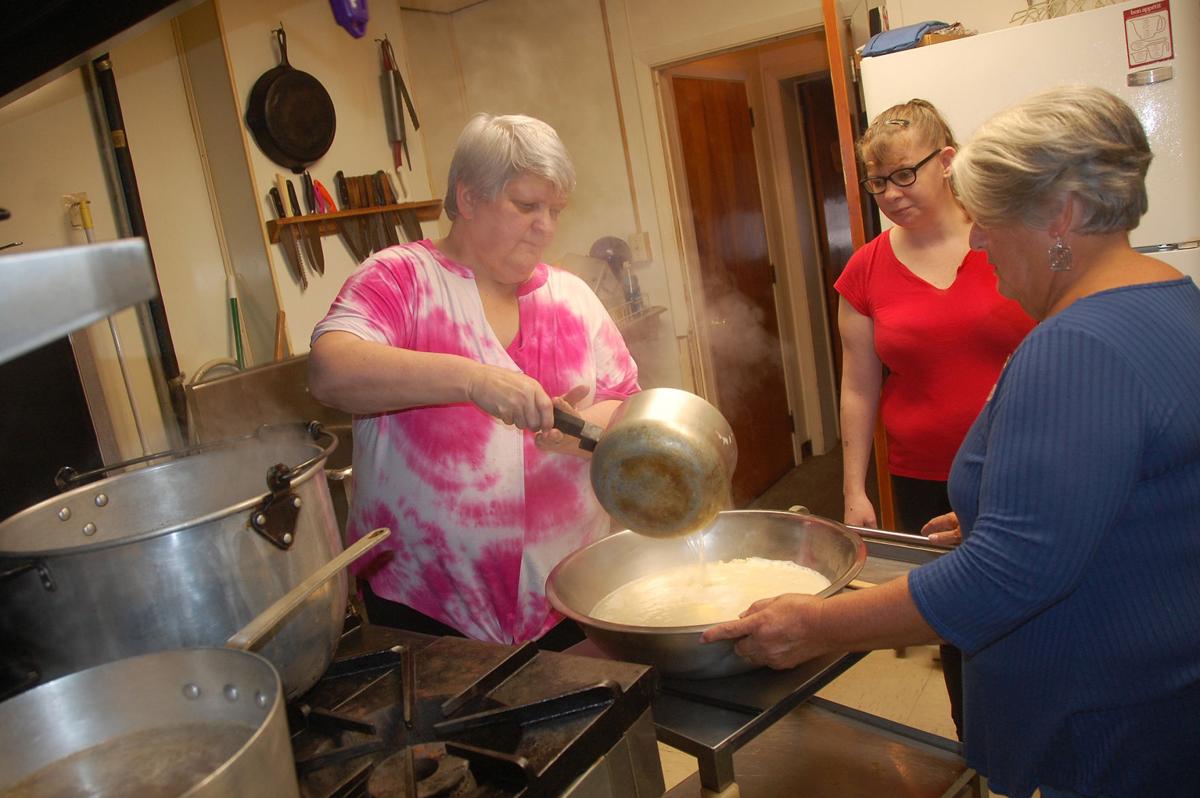 Working a hot kitchen at the Post Home on the Sunday before Thanksgiving, Jody Forsythe Honstine, Gina Huntsman and Linda Smith, from the left, prepared a supper of roasted turkey and all the fixings for the post’s veterans. Preparing meals is just one of the ways the auxiliary gives thanks and shows its support for military vets.

Jody Forsythe Honstine, president of American Legion Auxiliary Unit 24 in Huntingdon, says the organization is 100-plus years into its mission to support the Legion and local veterans. In her hand is a photo of some of Unit 24’s original members on the steps of the state Capitol in Harrisburg — a group whose legacy Honstine was to preserve.

Working a hot kitchen at the Post Home on the Sunday before Thanksgiving, Jody Forsythe Honstine, Gina Huntsman and Linda Smith, from the left, prepared a supper of roasted turkey and all the fixings for the post’s veterans. Preparing meals is just one of the ways the auxiliary gives thanks and shows its support for military vets.

The auxiliary serving the Frank P. Hommon American Legion Post 24 in Huntingdon has been supporting local veterans for over 100 years and is seeking additional hands to carry the organization’s mission into its second century.

For all auxiliary units, everyday is Veterans Day and Thanksgiving rolled into one, as they offer support to veterans and show their appreciation for the sacrifices made by military personnel.

The Sunday before Thanksgiving, a three-person team worked in the heat and steam of the post home kitchen preparing the Legion’s annual Thanksgiving supper, free to all vets.

In the kitchen, the ladies were joined by one of their newest members, Gina Huntsman, to bake green beans, prep the dressing, mix the gravy and mash the potatoes.

Smith explained the Legion paid for the food supplies but the auxiliary’s mission for that Sunday was to cook and serve, a task she said she enjoys.

“My favorite event is the Veterans Day breakfast we do — everyone is so appreciative,” Smith said. “Before COVID, we used to do a picnic out at the lake with card games and boat rides. We’re hoping we can start doing stuff like that again soon.”

Huntsman said a weekend here and there to cook for those who served their county is a sincere, humble gesture she’s glad to make. The auxiliary also visits the Veterans Home in Hollidaysburg, sells poppies pins in May, coordinates hoagie sales and holds a once-a-month meal as a fundraiser and other assorted activities throughout the year.

“We’re giving back to the vets for all the things they’ve done for us,” Huntsman said. “They’ve sacrificed their lives. All we’re sacrificing is our time and energy.”

Smith notes that she welcomes the prospects of new members to help develop more ideas for how the auxiliary can show its support for the Legion and local veterans.

Honstine said the past century brought about some changes for the organization, including the inclusion of men, but its mission has remained unaltered, as evidenced by their most recent work day of filling bellies on a day of thanks.

The challenge, Honstine said, is there are fewer members to tackle that mission today.

“In 1969 (at the auxiliary’s 50-year mark) we had over 400 members and now, there’s 122,” Honstine said, adding that a large number of members are now elderly and unable to do the amount of leg work they once did, leaving a relatively small core group to uphold the group’s mission.

“We want to get our membership back to what it once was,” Honstine said.

In September 1919, Legion members in cooperation with wives, sisters and mothers of Huntingdon’s war veterans, put into motion the foundation of a ladies auxiliary. The organizational meeting was held Sept. 16 in Fisher’s Hall (third floor of Fisher’s bakery building at 417 Penn St.) and the first regular meeting was held Sept. 21, 1919, in the Huntingdon County Courthouse.

Once organized the fledgling auxiliary immediately began raising funds and scheduling entertainment, suppers and other events for ”The Legion Boys.”

According to the 1919 minutes, shared by Honstine, the auxiliary’s first-ever event for Legion members was an ice cream social featuring sweets and tobacco plus live entertainment.

The minutes also provide a glimpse into early 20th economics. The auxiliary paid out a total of $41.45 for the event, the equivalent of $660 in today’s dollars.

The minutes are also a treasure trove of Huntingdon business history. Candy for the event was purchased from Grimison & Son ($3), cigarettes and cigars from Reeves-Parvin ($8.90), ice cream from Dean Strickler ($14.40) and dishes were rented from William Reed & Sons ($15.15).

In addition, those early minutes provide insight into the day-to-day efforts that went into establishing the auxiliary.

Membership dues were 50 cents per person and the organization opened a checking account at Union National Bank with an initial $15.50 deposit.

The first months were spent establishing bylaws and a regular meeting date, which proved a bit of a puzzle. Because of the popularity, at the time, of various fraternal organizations, the auxiliary had to find a date and time that didn’t conflict with other clubs’ meetings, especially the Rebekahs (the women’s branch of the Independent Order of Odd Fellows) who represented a majority of the new auxiliary membership.

Encouraged by the success of their inaugural social event for the Legion Boys, the auxiliary set about raising funds for its first major project — the purchase of a silk American flag to fly over the state Capitol dome in Harrisburg.

Honstine said despite the flag options costing between $1,500 and $5,000 in today’s dollars, the organization was undeterred, and over the course of several years, pulled together the funds. A photo of the auxiliary delegation, taken on the steps of the Capitol the day their silk flag flew, hangs in the post home along with the auxiliary’s original charter.

The auxiliary elected officers in February 1920, five months after organizing, and that same month, applied for its official charter. The charter was signed by the national president June 22, 1923, by the state president July 1, 1923, and was received in Huntingdon Oct. 10, 1923.

“When you look back at what they were doing to get things together, they did a lot of hard work,” Honstine said. “And we are still here, 100 years later.”

Rebuilding the membership requires outreach and education. The first order of business is finding out who can join the American Legion Auxiliary.

According to the national American Legion Auxiliary organization, spouses (both male and female), grandmothers, mother, sisters and female descendants of American Legion members or those of United State service members who served during World War I and from the beginning of World War II to present day, can join.

The national organization reports there are more than 8,000 local auxiliary units, just like Unit 24, nationwide.

The number of auxiliary units should be taken for granted; Honstine points out that each unit is only as strong and effective as its membership.

“I do not want to see it fall through; we learned at a district meeting that nine auxiliaries had to forfeit their charters in the past year,” Honstine said. “I don’t want us to be another casualty, I’d like to see it going for another 100 years.”

For more information on the Frank P. Hommon American Legion Auxiliary, including how to join or help out, contact membership chairperson Linda Smith at (814) 386-1186. You can also follow the Auxiliary on Facebook.