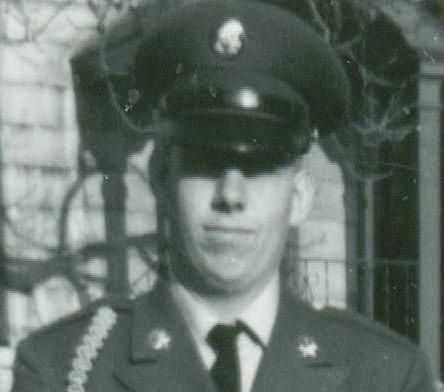 A daughter and wife are remembering their father and husband this Memorial Day after recently accompanying his remains to a final resting place in Arlington National Cemetery in Washington, D.C.

“He watched the show NCIS a lot and they often reference Arlington and he would always say he would love to be buried there,” said Mr. Rickeard’s daughter, April Swartz. “He said it was the highest honor a veteran could get, but he didn’t think it was something for which he was eligible.”

Following his death, Swartz was watching an episode of NCIS and remembered her father’s wish.

“The episode referenced taking a soldier to Arlington and showed the cemetery and I thought, “I wonder if I could call and see if my dad is eligible?’” she said.

Rickeard enlisted in the U.S. Army after high school in 1965 and served in Vietnam during the Vietnam War with Co. A 4/3 11th Infantry Brigade. He was honorably discharged in 1968, attaining the rank of Specialist 4th Class. He received the National Defense Service Medal, Vietnam Service Medal, Vietnam Campaign Medal, Combat Infantryman Badge and Two Overseas Bars.

Swartz found out her father’s service and honorable discharge made him eligible to be interred in the final resting place of over 400,000 men and women who served their country

Swartz said the process to get to Arlington was not easy.

“It took about a year of emails and telephone calls and paperwork,” said Swartz. “Most of the people there are volunteers and they were so great to work with. They kept in touch with me throughout the entire process.”

She’s also thankful for the help offered by the John B. Brown Funeral Home, which handled her father’s arrangements, and assisted in completing documents and sending them to Washington, D.C.

“They knew how important this was and helped me get information there on time, so as not to delay the process,” she said.

The family made the trip to the nation’s capital May 4, one day after what would have been her father’s 73rd birthday.

“We had to go through a lot of security and, due to COVID-19, we had to wear masks and social distance, maintaining a distance of 10 feet apart,” said Swartz.

Swartz and her husband Barry and her mother Dianne Hess-Rickeard were then escorted to a memorial chapel where the service took place.

“The handler, who is the case worker, explained everything that would happen and what we could expect,” said Swartz.

Following the service, full military honors were accorded and the family was escorted to the columbarium, the final resting place for Mr. Rickeard’s ashes.

Swartz said her father will eventually have a marble niche that lists his name, military rank, years of service, religion and dates of birth and death.

“They put a temporary one on and it takes two or three months for the the permanent niche,” she said. “They will request we go back down to make sure everything is correct when it’s in place.”

Swartz said the process of taking her father to Arlington brought closure for her.

“As the service started to approach, I didn’t know if I could do this because I had to part with 100% of my father’s ashes,” she said. “I had his remains at my house from the time they were returned from the crematorium and I felt like he was here with me. I knew the service would be a final goodbye.”

Swartz also anticipated the service would be emotional.

“I thought I’d be an emotional wreck, but I told myself this is what he wanted and I’m happy I was able to give it to him,” she said. “Once the service was over, I felt at peace, my mom felt at peace and my husband felt at peace. It was if a big weight was lifted off our shoulders. Yes, it was a final goodbye, but he’s home now. I know he’s where he needed to be. It felt like my dad was there with us and my mom said, ‘I bet he’s watching over us, grinning ear to ear.’”

Swartz said her father was proud of his military service, but, like many veterans, didn’t speak much of his days in Vietnam.

“He told me his best friend died in his arms, but he never spoke about it in-depth,” she said. “He spoke more about when he first enlisted.”

A Saxton native, Mr. Rickeard lived in Huntingdon before moving to Spring Run, Franklin County. He worked at Letterkenny Army Depot as a power engineer for 23 years until his retirement in 2011.

During his time at Letterkenny, Mr. Rickeard received a Letterkenny Penny, given to employees who exhibit good work ethic and excellent workmanship.

“The colonel is the only one who presents it and it’s engraved with his name and date,” said Swartz. “Not many get a Letterkenny Penny, so my dad was very proud of that.”

Swartz has fond memories with her father.

“He was a fun person and so caring,” said Swartz. “He would give the shirt off his back to help someone.”

This Memorial Day, Swartz urges folks to give thanks for the men and women who served their country, no matter the branch or if they served during a time of war or peace.

“We need to honor our loved ones who have served their country and the ones who never came home,” she said.

Swartz said she plans to return to Arlington often.

“Even though you’re right outside the city and you can see the White House, you’re in this peaceful place when you’re in the cemetery and it’s a very humbling experience,” she said. “You’re in the company of heroes. It almost takes your breath away. We’re going to visit quite often.”