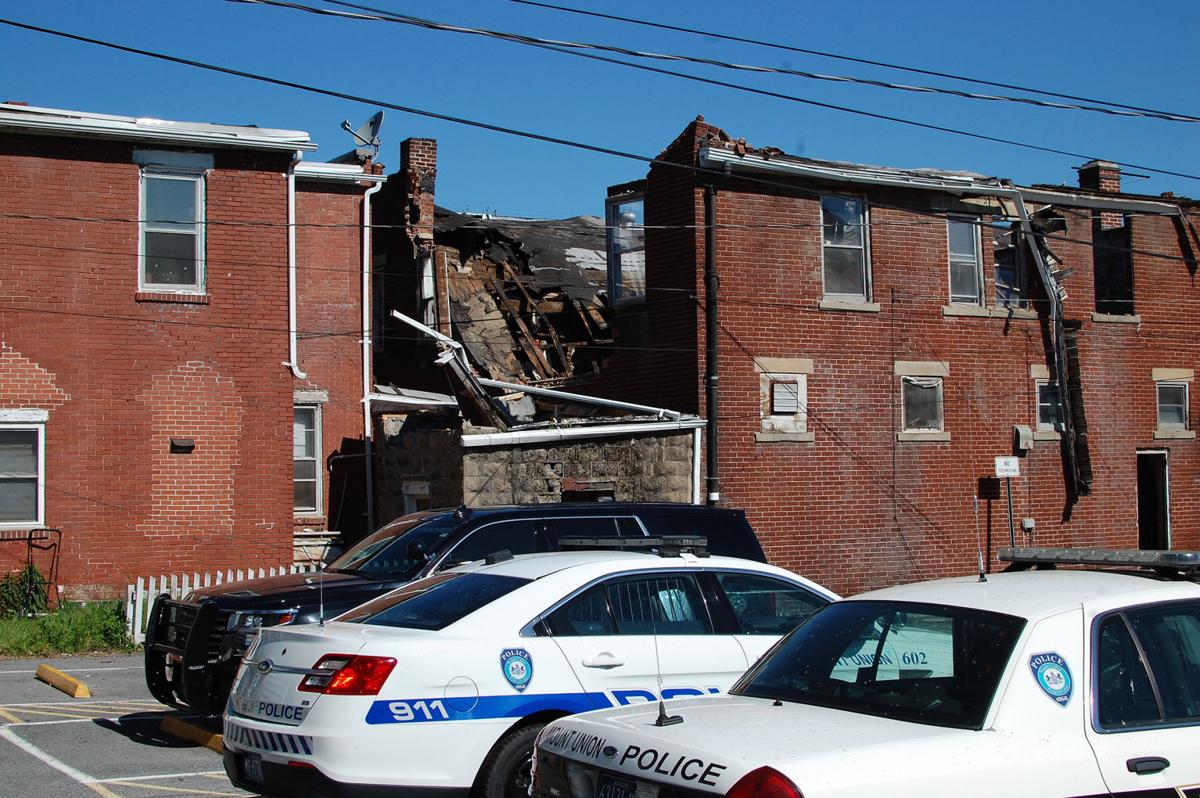 A two-story brick building at 15-19 S. Jefferson St., Mount Union, viewed from the back, lost its roof Friday when strong winds blasted the county. The roof fell inward, taking down the second and first floors. The building’s proximity to neighboring structures and the Mount Union Borough Police Department parking lot are an immediate concern to borough officials. 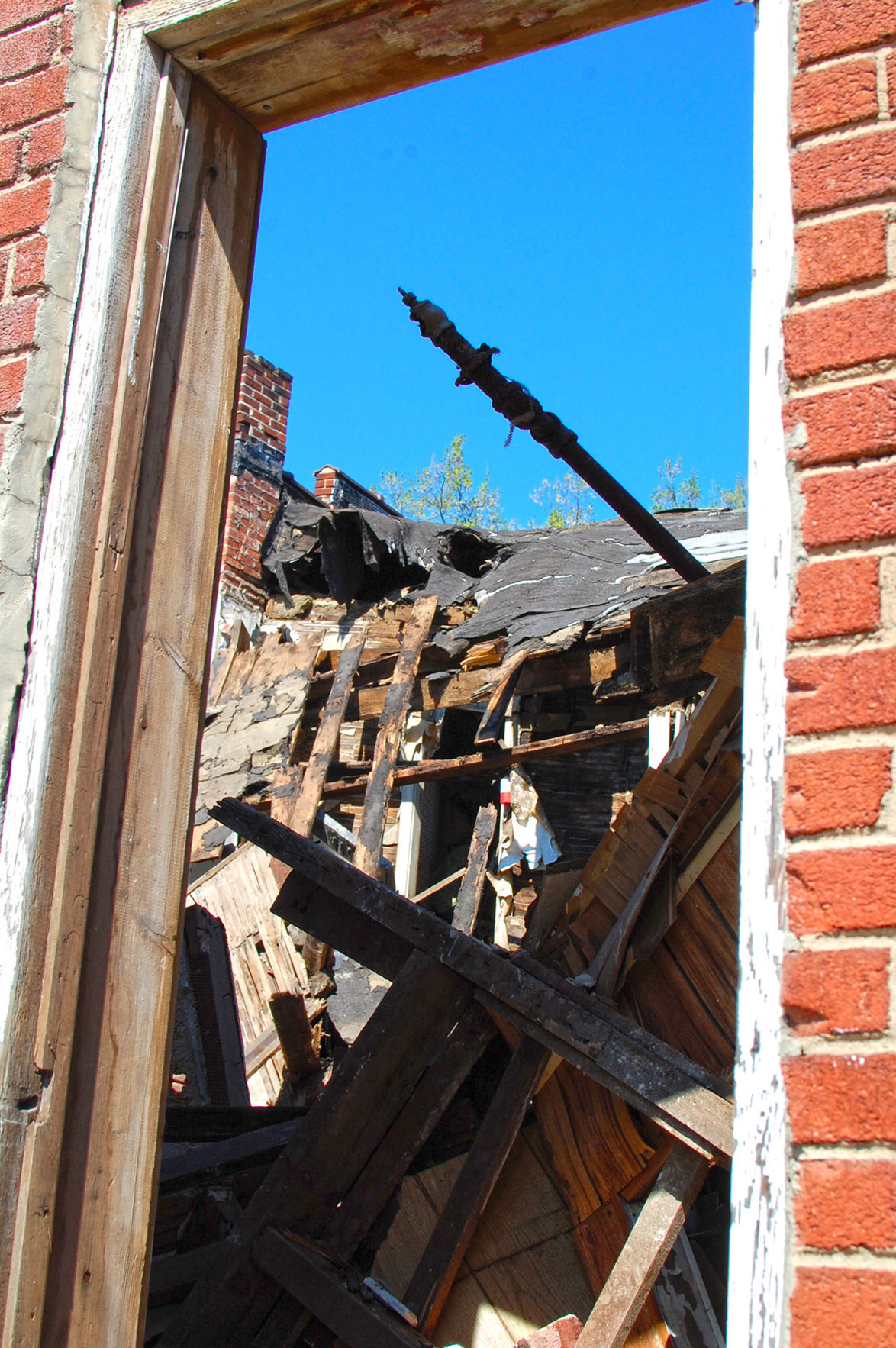 Sky and debris are the view from the building’s back door.

A two-story brick building at 15-19 S. Jefferson St., Mount Union, viewed from the back, lost its roof Friday when strong winds blasted the county. The roof fell inward, taking down the second and first floors. The building’s proximity to neighboring structures and the Mount Union Borough Police Department parking lot are an immediate concern to borough officials.

Sky and debris are the view from the building’s back door.

An abandoned building on South Jefferson Street, which is the subject of a proposed green space project by Mount Union Borough, lost its roof and partially collapsed on itself Friday during a windstorm that swept through Huntingdon County.

Mount Union Mayor Tim Allison reports there were no injuries and the area around the building, located at 15-19 S. Jefferson St., has been secured to the best of the borough’s ability. The sidewalk in front of the property is taped off, barring foot traffic.

The roof and the second floor appear to have fallen down onto the first floor and into the basement level. A portion of the exterior wall collapsed as well, damaging a garage next door.

Mayor Allison said he was contacted by Sgt. Justin Inch of the Mount Union Police Department around 6-6:30 p.m. Friday about the collapse.

“We are currently monitoring it and hoping it doesn’t get any worse,” Allison said Saturday afternoon. “This proves that this was not stable.”

After months of effort by solicitor Larry Lashinsky, the borough now owns the building and, with help from the Huntingdon County Planning and Development Department, is working on a plan to take it down and creating a public green space in its place.

Huntingdon County awarded the borough $52,000 in Community Development Block Grant funds for the proposed project; the borough, the county and the Mount Union Area School District forgave roughly $30,000 in back taxes so the project could proceed.

Stacia Fe Gillen, community development administrator with the county planning department, says the department is in the middle of an environmental review for the property, which includes a historic review.

As part of the review process, CES Engineering of McConnellsburg conducted a cost analysis for rehabilitation and concluded such a project would run $611,455 — “much higher than the property’s worth.”

Gillen said the building was listed on the sheriff’s sale for several years but did not sell.

Several Mount Union residents, including Patrick Reeder who serves on both the Mount Union and Huntingdon County planning commissions, have challenged the demolition, arguing the building could be rehabilitated.

“Moving forward we will try and make recommendations for the future so things like this do not happen,” Reeder said. “We will have to look at policy and procedures to see how this even happened.”

“We still need to get our vehicles in and out of the lot,” Allison said, noting on previous occasions, debris from the building damaged vehicles parked in the lot.

Mount Union’s former code enforcement officer Alec Brindle said 15-19 S. Jefferson St. was among the approximately 20 buildings identified as blighted in the spring of 2019 during a borough-wide review of structures.

“It wasn’t No. 1 on the list but it was pretty close,” Brindle said.

Brindle toured the building in 2019 During the three-day process, he said he checked the building out from top to bottom and, based on his findings, brought its condition to borough council’s attention.

“There’s really nothing holding that building up,” Brindle said, explaining support beams were shot with mold and rot. “I took photos and got the hell out of there.”

Brindle, who left his position with Mount Union in March, approached the county planning department on behalf of the borough to see if there was funding available to remedy the situation. The ball has been rolling since on the proposed project.

Brindle said he’s not sure how to assess his level of surprise at Friday’s collapse.

As the project works its way through the review and approval process, Brindle said he is concerned about further deterioration on the site and public safety, especially for motorists driving on South Jefferson Street and those who live in the buildings adjacent to the property.

The building has been vacant for roughly 10 years. Built between 1910 and 1919, it once boasted two street level storefronts and two apartments on the second floor. At some point in its history, the storefronts were converted into apartments.