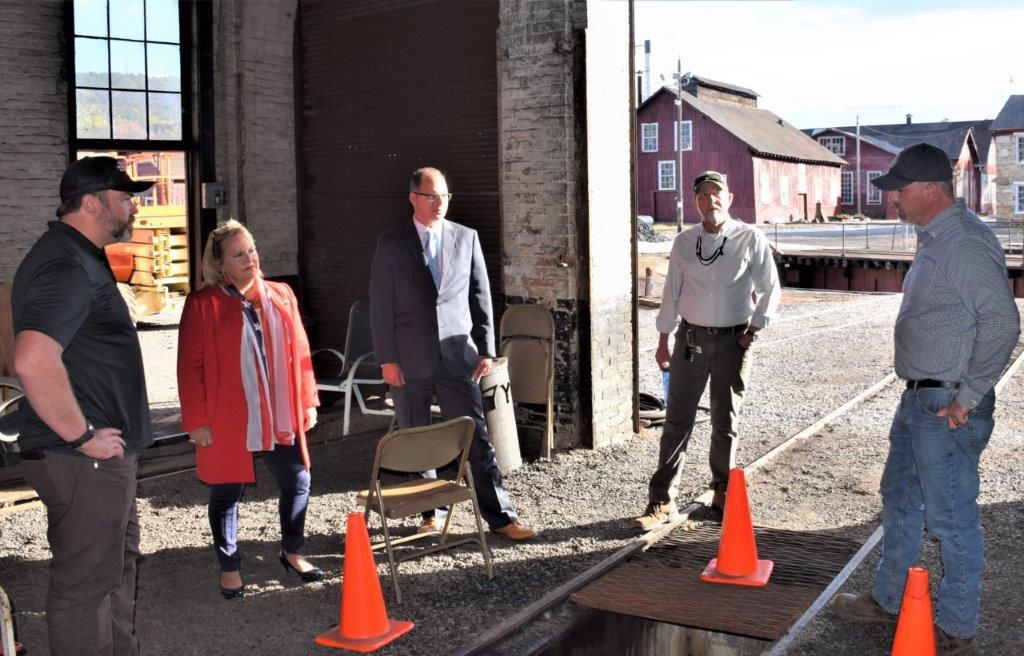 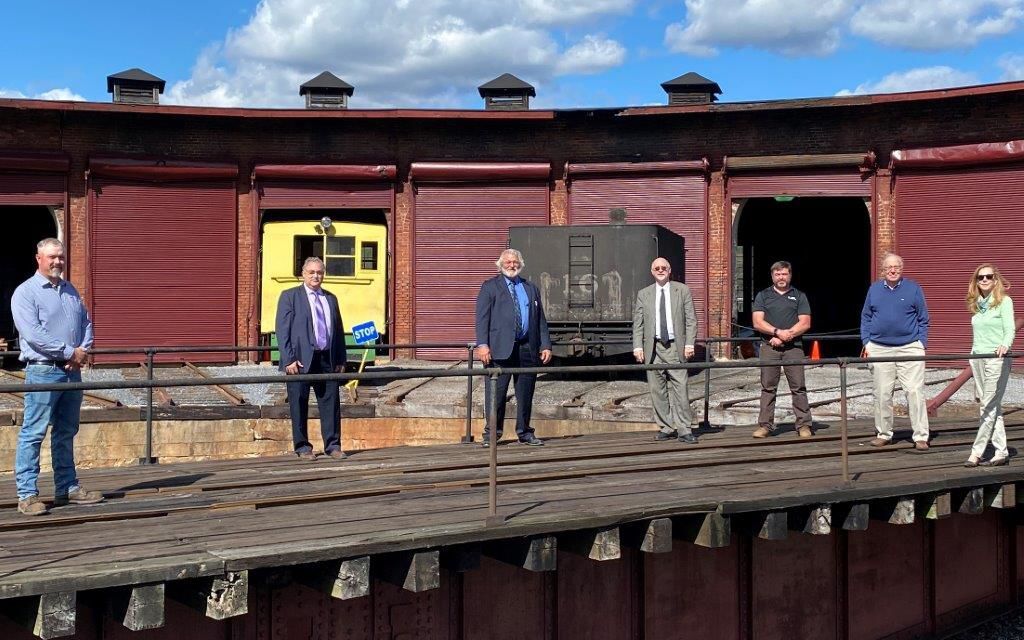 Joining in a tour of the East Broad Top Railroad Thursday were the Huntingdon County Commissioner and other supporters of the restoration, including, from the left, Brad Esposito, EBT Foundation general manager; county commissioners Scott Walls, Jeff Thomas and Mark Sather; Jesse Clemmer, who is supervising the installation of a water sprinkler system in the EBT round house; EBT activist Bennett Levin; and Jane Sheffield, executive director of the Allegheny Ridge Corp.

Joining in a tour of the East Broad Top Railroad Thursday were the Huntingdon County Commissioner and other supporters of the restoration, including, from the left, Brad Esposito, EBT Foundation general manager; county commissioners Scott Walls, Jeff Thomas and Mark Sather; Jesse Clemmer, who is supervising the installation of a water sprinkler system in the EBT round house; EBT activist Bennett Levin; and Jane Sheffield, executive director of the Allegheny Ridge Corp.

Two local legislators and the Huntingdon County Commissioners toured the East Broad Top Railroad Thursday afternoon and learned how a $100,000 state grant will help promote the safety of the National Historic Landmark.

Senator Judy Ward (R-30) and Rep. Rich Irvin (R-81), along with Huntingdon County Commissioners Scott Walls, Jeff Thomas and Mark Sather were taken on a tour of the EBT property at Rockhill which was acquired earlier this year by the new East Broad Top Foundation Inc. Plans call for the reopening of the EBT in 2021 as restoration work continues on the railroad.

During the tour of the EBT site, foundation officials, county commissioners and the two state legislators recognized the economical and historical impact Ole Easty will have on the region when it reopens in 2021, signaling a new chapter in tourism promotion for Huntingdon County.

Early last month, an announcement was made by Ward and Irvin about a $100,000 grant from the Pennsylvania Historical and Museum Commission (PHMC) which is being used for the installation of a critical fire suppression system in the railroad’s ancient machine shop complex.

In addition, the funding will aid in upgrading of the railroad’s water system making sure that an adequate supply of water is available for the fire suppression system. The rehabilitation project is seen as a public safety measure that will help protect the valuable historic property.

As a result, the improvements will support public demonstrations in the restored railroad shop complex, all apart of the multi-phase EBT restoration project announced earlier this year, explained Brad Esposito, EBT Foundation general manager. Work on the system began recently in the EBT round house and is expected to be completed within a few weeks.

The state funding came from the PHMC’s Keystone Historic Preservation Grant program, a funding stream which provides financial assistance to nonprofit organizations and local governments involved in planning and development of historic resources that are open to the public. Assistance in securing the monies was also provided by the Allegheny Ridge Corporation overseers of the multi-phase Main Line Canal Greenway which passes through Huntingdon County.

Designated a National Historic Landmark in 1964, the EBT property qualifies for the state funding since it is listed on the National Register of Historic Places.

Esposito told the two legislators and county commissioners that fire suppression is a critical component of the foundation’s stabilization and preservation effort at the EBT and thanked the state and county leaders for their “vote of confidence” and support of the multi-phase EBT restoration project.

The state legislators, county commissioners and foundation officials agreed that Ole Easty’s return to service next year and enhancements in the years that follow, will help boost the tourism economy in the county while restoring and promoting a valuable historical landmark that once employed thousands of people along the narrow gauge right of way between Mount Union and the Broad Top Coal Field.

Foundation officials outlined some of the plans for the EBT that includes use of the distinctive railroad shop complex at Rockhill and the return of two steam locomotives to the rails in 2021.

Ward, Irvin and the county commissioners recognized the importance of the EBT and pointed to the enthusiasm and commitment of the new nonprofit organization in reviving a historic transportation system that served numerous industries in southern Huntingdon County and the Broad Top from 1874 to 1956, followed by the reopening of the railroad as a tourist operation in 1960.

The foundation acquired the entire railroad shop complex, rolling stock, steam locomotives and right of way between Aughwick Bridge, north of Mount Union, to the Robertsdale/Wood area earlier this year. The tourist railroad closed in 2011.

Already, rehabilitation of the right of way between Rockhill and Colgate Grove, near Shirleysburg, as well as enhancements on the southern end of the right of way at Robertsdale, has set in motion a promising future for one of the nation’s most popular historical attractions.

The installation of the new fire sprinkler system in the round house will be followed by similar work in several of the adjoining railroad repair shops, subject to future funding availability.

On hand for the Thursday tour was Jesse Clemmer, president of Clemmer Fire Protection of Phillipsburg, who is overseeing the installation of the new fire suppression system and Lawrence Biemiller, communications manager for the EBT Foundation, who led the visitors on a tour of the EBT property.