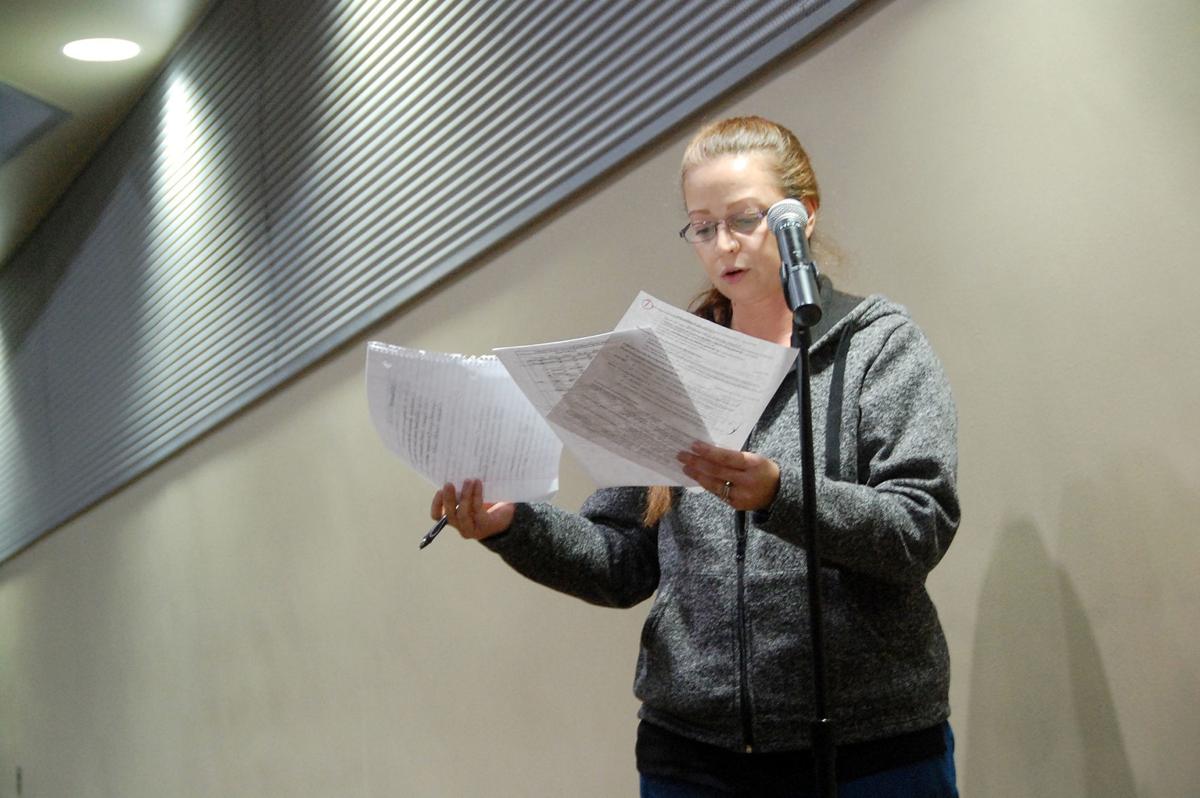 Parent Kristy Auman posed questions to administrators during Thursday night’s discussion on the proposed reconfiguration of MUASD’s elementary program and closure of the Mapleton-Union school. A similar discussion session was held in January and a public hearing was held in December. 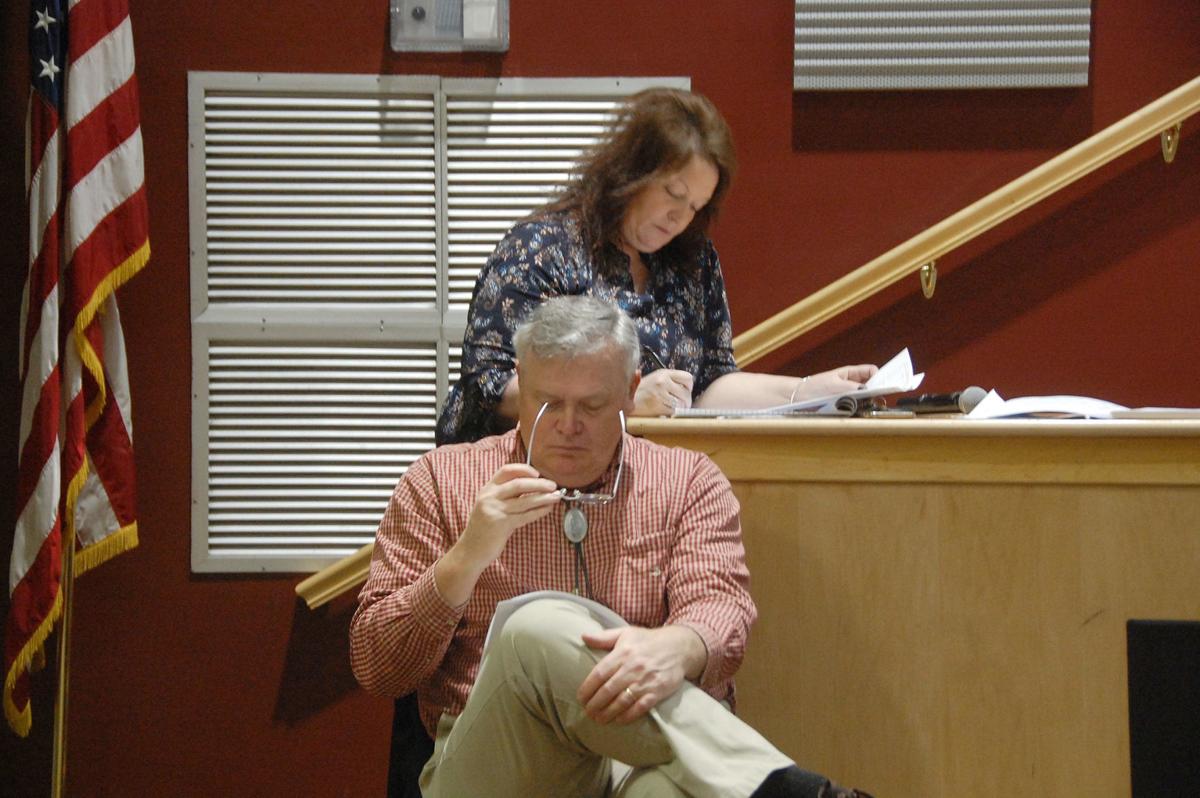 School board member Duane Gearhart and MUASD’s special education director Dianne Thomas reviewed busing schedules and enrollment projections shared during Thursday night’s discussion on the proposed elementary reconfiguration. The board is slated to vote on the proposal at its March 30 meeting.

Parent Kristy Auman posed questions to administrators during Thursday night’s discussion on the proposed reconfiguration of MUASD’s elementary program and closure of the Mapleton-Union school. A similar discussion session was held in January and a public hearing was held in December.

School board member Duane Gearhart and MUASD’s special education director Dianne Thomas reviewed busing schedules and enrollment projections shared during Thursday night’s discussion on the proposed elementary reconfiguration. The board is slated to vote on the proposal at its March 30 meeting.

Superintendent Dr. Amy Smith and fellow administrators propose moving all kindergarten through second grade students to the Mount Union-Kistler building and all third through fifth grade students to the Shirley Township building. The proposal includes the closure and sale of Mapleton-Union Elementary School.

The board is schedule to vote the issue at March 30 meeting.

She said if the decision is made to close Mapleton, the district should consult with taxpayers on what to do with funds from the sale.

“We could use that money for other things and the community ought to be involved,” she said. “That’s our tax money.”

Henry added she feels most students will adjust to whatever changes lies ahead with their schools.

“Children are resilient and they will get through it,” she said.

Lee Forgy is a bus driver for the district but spoke Thursday as a taxpayer, and asked the district to hold off on selling the Mapleton school, should the reconfiguration plan pass. Forgy said building is an asset to the district and would be perhaps $10-20 million to replace if the district found itself in need of space.

Forgy said he also sees the Mapleton school, if put on the market, as a potential charter school location.

“What happens if a charter school moves in?” he asked. “That’s still our tax dollars.”

Superintendent Dr. Amy Smith said the district has no control over where a charter locates and that one might as easily move into the former Mount Union elementary school which is vacant.

“A charter school could move into any property in Mount Union,” she said.

Parent Jen Randoll said her son struggles with transitions and asked if its really necessary to create another transition year for students, as they move from second to third grade — a move that might be especially hard for special needs children.

“I do not have reservations about the transitions,” she said.

Michele Grove, principal at Mount Union-Kistler, said the plan will allow the district to pool its age-appropriate resources and therefore, great stronger programs for all of its early elementary students and all of its intermediate students.

Carol Kauffman, MUASD’s business director, said she reviewed census information as well and noticed it projects a decrease in the counties’ birth rates. Audience members questioned whether those numbers could be swayed by the local hospital closing its maternity unit.

Patty Veitch, parent, asked district officials to address a rumor that teachers aren’t allowed to share their opinions on the proposal directly with board members.

Smith dispelled the rumor, saying as superintendent she has no issue with employees speaking to board members about the proposal. She said the Pennsylvania School Boards Association doesn’t recommend it, however, a position that may have led to confusion on whether teachers could or could not talk to board members.

Parent Michelle Price questioned the purpose of the district’s public discussions, saying Smith seems to have her mind made up about the reconfiguration.

Board member Andrea Christoff clarified that the board, not administrators, will make the final determination on the proposal. She said the discussion session where held for the board’s benefit, as much as the public’s, to help them consider different perspectives as they each develop their positions.

Thursday’s meeting opened with a review of answers to questions posed by the public at the special session held Jan. 29.

Kauffman reviewed busing schedules, pointing out that once the district has all its information about the incoming kindergarten class in hand, they can fine tune the schedule. Until such time, Kauffman said the current version of the schedule as shared Thursday represents the “worst case scenarios” for busing to and from the schools.

Enrollment over the past five years shows a decline in the district’s elementary student population, from 674 total students in kindergarten through fifth grade during the 2014-15 year to 574 student this current year. Projections indicate the elementary population will hold fairly steady between now and the 2025-26 school year.

At present, elementary students are divided among the three schools as follows: roughly 230 at Mount Union-Kistler, 260 at Shirley Township and 80 at Mapleton-Union.

“Now right, the big transition is from fifth to sixth grade when the move to the junior high,” Hockenberry said.

Hockenberry said teachers reports concerns over gym space, saying Mount Union-Kistler, because of its facilities, might make a better location for the intermediate grades.

Michele Grove, principal at Mount-Kistler, reported on how the district will group students to help ease the stress on the youngest students as they get acclimated to a new school.

Grove said as always, for the schools that have more than one classroom per grade, they will find the best mix of students per room by looking at academics, personalities and other such factors.

She said while parents and students may mourn the loss of the existing communities that have developed at each of the schools, the reconfiguration creates opportunity for new relationships and friendships.

The reconfiguration plan was first presented to the board at a building and grounds committee meeting in November. A state-mandated public hearing was held in December, following by the two Q&A sessions. At each meeting, the audience has been divided fairly evenly between parents and teachers.

“Everyone has been given opportunity to ask questions,” Smith said, adding the district will still field questions leading up to the board’s March vote.

Smith said she understands some parents’ apprehension but also believes the plan will yield more advantages for students than challenges.

“I’m looking at it from an educational perspective and believe it’s what’s best for the district,” she said. “I hope everyone understands that I do care about the district and about what’s best for our students. We wouldn’t be promoting the plan if I felt it was detrimental to students.”