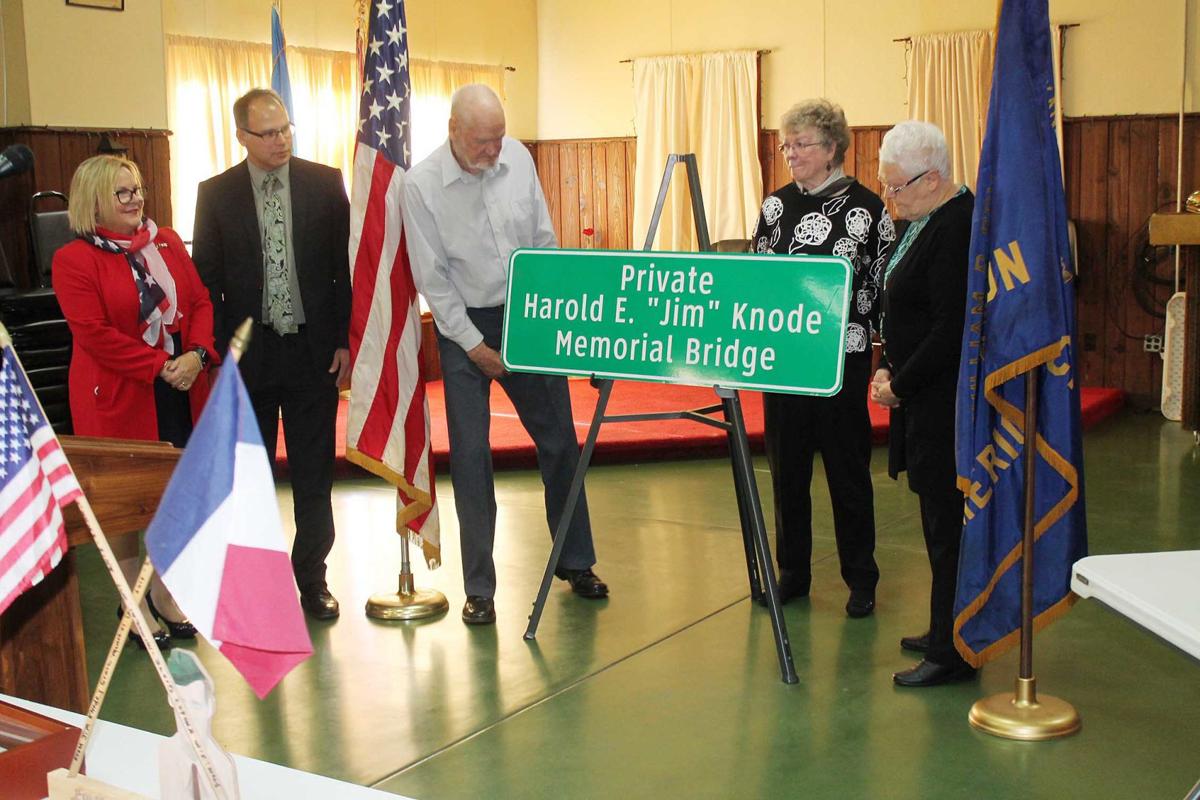 The family of Harold E. “Jim” Knode saw the official unveiling of the bridge dedicated in his honor at a ceremony Saturday at the William P. Spyker American Legion Post 520, Alexandria. Those who took part in the unveiling included, from the left, state Sen. Judy Ward, state Rep. Rich Irvin, brother Robert Knode, daughter Brenda King and sister Shirley Weaver. 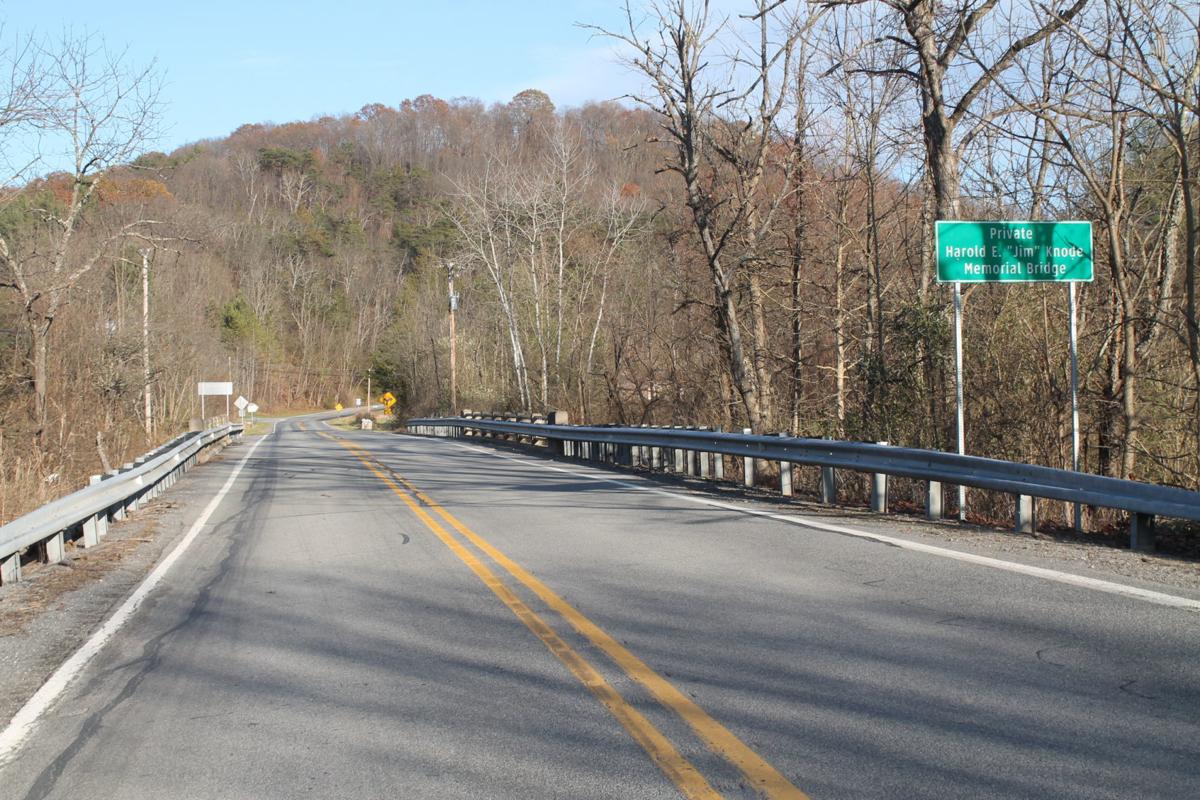 The family of Harold E. “Jim” Knode saw the official unveiling of the bridge dedicated in his honor at a ceremony Saturday at the William P. Spyker American Legion Post 520, Alexandria. Those who took part in the unveiling included, from the left, state Sen. Judy Ward, state Rep. Rich Irvin, brother Robert Knode, daughter Brenda King and sister Shirley Weaver.

Family and friends of Harold E. “Jim” Knode gathered at the William P. Spyker American Legion Post 520, Alexandria, Saturday, to celebrate the official bridge dedication in his honor, and to celebrate the life of a brave veteran.

The bridge, known as the Harold E. “Jim” Knode Memorial Bridge, is on Route 305 just outside of Mooresville in Barree Township.

After post commander James Singer, nephew of Mr. Knode, gave the introduction and brother Robert Knode gave the dedication, other family members talked about who Mr. Knode was and his time as a private in the U.S. Army.

Deb Weaver Bauer, niece of Mr. Knode, spoke of his time growing up in the McAlevys Fort area.

“Many may wonder how he got the nickname of Jim,” she said. “His mother’s father looked at him and thought he looked more like a Jim, so that was it.”

Mr. Knode was also the eldest of 10 children, and siblings Robert Knode, Betty Miller and Shirley Weaver survive. He was also united in marriage to his wife, Irene (Wilson) Knode in June 1938, and they had two children, the late Barbara Stuter and Brenda King. He also had three grandchildren, including Matthew King, Jennifer Baker and the late Angela Hawn, as well as two great-grandchildren and a number of nieces and nephews.

Singer detailed Mr. Knode’s time in the service, as he drafted to the U.S. Army in February 1944 at the age of 31, despite health issues that would have kept most men from serving in the military today.

“They didn’t allow for many exemptions at that time,” he said. “But, he served honorably, and he gave his life for his country.”

Singer also described the conditions in which Mr. Knode served, as soldiers who were with him and had the task of helping to liberate France were in what some would call deplorable conditions.

“These were men who served with little training and no combat experience,” he said. “The area where he was in France was often overlooked and underreported, not like today where reporters are often embedded with units to report on what is happening in a particular area.”

Though it’s unclear what happened that resulted in Mr. Knode being killed in action in Nov. 28, 1944, Mr. Singer said he was likely killed in the Moselle River in France.

Bauer also detailed what she called the “intersections of pathways” that led to the bridge dedication, including those who have served during wars to allow Americans to have their freedoms today.

“The path that allows us to have our freedoms today was steep,” she said. “Our country was protected by men and women who have served our country.”

She also detailed the journey, the second pathway, she, along with her mother, Weaver, and Mr. Knode’s daughter, King, took to Epinal, France, his final resting place.

While in France, Bauer said caretakers of the cemetery were able to give the family a 21-gun salute and a private funeral service for Mr. Knode.

The third pathway was the journey to have the bridge named after Mr. Knode.

“We thought we call PennDOT, get a sign, and that would be it, but we were wrong,” said Bauer, detailing it was because of the work of Barree Township Supervisors, state Rep. Rich Irvin and state Rep. Kerry Benninghoff, Gov. Tom Wolf and the Legion that a three-year journey to get the bridge named has come to fruition.

State Sen. Judy Ward also made a few remarks, saying that Mr. Knode was a part of the “Greatest Generation.”

“He accepted the call of duty to defend our country,” said Ward. “We need more Jim Knodes in this world — people of strength, courage and commitment to our country.”

Benninghoff, as Majority Whip of the state House, said Irvin was persistent in getting legislation passed that would allow for this bridge dedication.

“We’re reminded after occasions, like 9/11, to never forget, but we often do forget,” he said, adding that occasions like this and bridge dedications serve as ways to remind people those who have sacrificed for the United States.

“We wouldn’t have that honor unless they did what they did,” he said.

Irvin said he was “humbled and honored” to have introduced legislation to name the bridge in Mr. Knode’s honor.

“It’s fitting we’re having this on Veterans Day weekend, and it’s been a long time coming,” he said, adding the family actually has been pursuing this since 2010.

Singer helped to conclude the ceremony by presenting an American Flag to King, as the original flag presented to the family after his passing was destroyed in a fire.