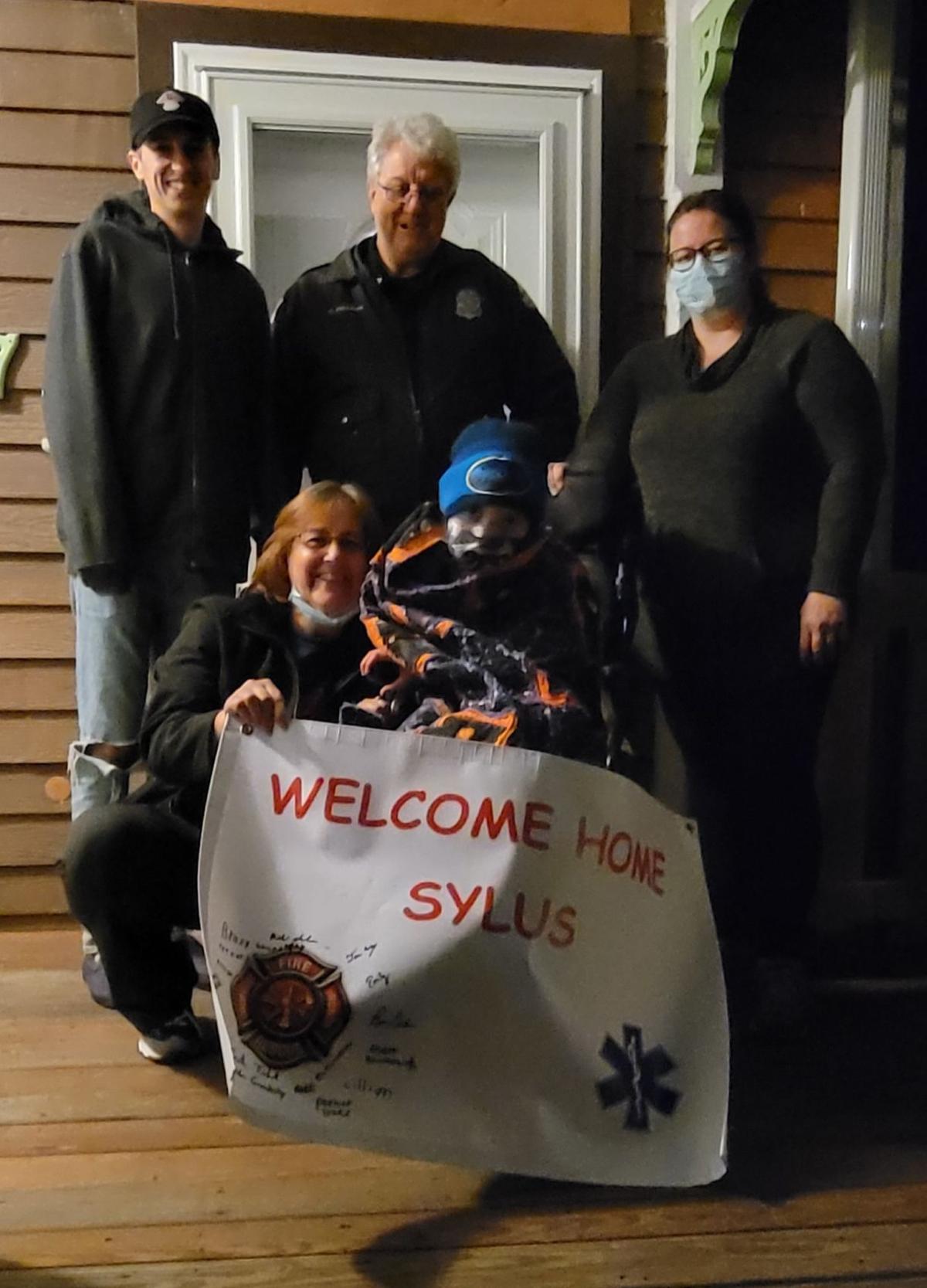 The Fellman family welcomed home 8-year-old Sylus Fellman Tuesday evening, after he spent 134 days at UPMC Children’s Hospital of Pittsburgh after he was diagnosed with juvenile metachromatic leukodystrophy (MLD). Those who welcomed him home were, front row, his grandmother, Patty Fellman, back row, Uncle Matt Fellman, grandfather Crist Fellman, and his mother, Heather Fellman. 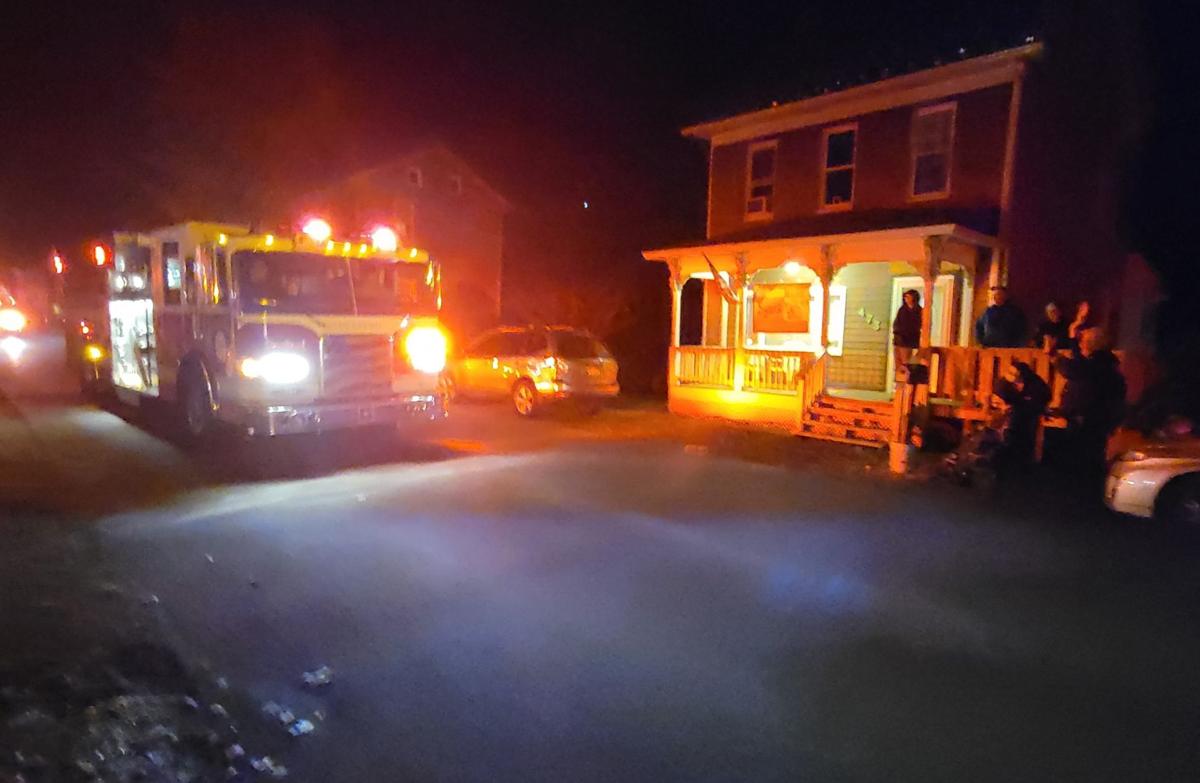 Eight-year-old Sylus Fellman of Petersburg was given a hero’s welcome home from area fire companies Tuesday evening, as he’s spent 134 days at UPMC Children’s Hospital of Pittsburgh for being treated with juvenile metachromatic leukodystrophy (MLD).

The Fellman family welcomed home 8-year-old Sylus Fellman Tuesday evening, after he spent 134 days at UPMC Children’s Hospital of Pittsburgh after he was diagnosed with juvenile metachromatic leukodystrophy (MLD). Those who welcomed him home were, front row, his grandmother, Patty Fellman, back row, Uncle Matt Fellman, grandfather Crist Fellman, and his mother, Heather Fellman.

Eight-year-old Sylus Fellman of Petersburg was given a hero’s welcome home from area fire companies Tuesday evening, as he’s spent 134 days at UPMC Children’s Hospital of Pittsburgh for being treated with juvenile metachromatic leukodystrophy (MLD).

A Juniata Valley family, and one 8-year-old boy, can take solace this Thanksgiving Day, knowing that everyone will be under the same roof to give thanks, whether it’s for one another, or the greater community who has supported them.

Sylus Fellman, the son of Heather Fellman of Petersburg, was diagnosed with juvenile metachromatic leukodystrophy (MLD) in May, which is described by www.rarediseases.org as a “rare hereditary disease characterized by accumulation of fats called sulfatides. This causes the destruction of the protective fatty layer (myelin sheath) surrounding the nerves in both the central nervous system and the peripheral nervous system.”

Sylus been seeking treatment at UPMC Children’s Hospital of Pittsburgh since July, and was released from the hospital Tuesday after 134 days in the hospital. His mother, Heather Fellman (chief clerk for the Huntingdon County Commissioners) and his grandmother, Patty, have been with him in Pittsburgh.

Crist Fellman, Sylus’ grandfather and the public safety instructor at Huntingdon County Career and Technology Center, said doctors have told the family that Sylus has done remarkably well with the procedures he’s had to go through since he’s been at UPMC Children’s Hospital of Pittburgh.

“The doctors are saying basically that he’s remarkable in that all of his numbers are good, and he’s rebounded from procedures better than anyone else they’e ever had with the same illness,” he said.

Fellman also described what is happening with Sylus with this illness earlier this summer to The Daily News.

“What this disease does to your brain is that all the nerve ends have this protective covering called white matter, and this disease is eating the white matter off the ends of the nerves,” he said. “What will eventually happen over time is that he’ll lose all of his abilities. He won’t be able to walk, talk, hear, see or speak, all of that kind of stuff.”

He also noted the family is grateful and happy to be home after spending so much time in Pittsburgh.

“He walked when he went to Pittsburgh, but he’s not walking now,” said Fellman. “(Doctors) feel that (because of the treatment), his ability to walk, as well as write, may come back, but absent of actually seeing it, it’s going to take time.”

Fellman said there will be nurses for home health rehabilitation that will help care for Sylus’ and a teacher will also be assigned to him to work with him to help with homeschooling.

“Right now, his immune system is down, so we will still have to watch,” said Fellman. “But, he got a flu shot this week, and he also got a COVID shot. We’re thankful he can be home for the holiday season.”

The entire Fellman family is most thankful for the outpouring of support they’ve received from the community since Sylus’ diagnosis.

“The community outpouring has been unbelievable,” he said.

Fellman said the family is also grateful for work of Ben Varner and Dwight Rittenhouse, who have taken the lead in helping to equip the Petersburg home for Sylus to be accessible.

“I know that Scott Walls, county commissioner, was a big player in getting that project rolling so we can get a handicap bedroom for Sylus so he can access it,” he said. “Churches have made significant contributions, social organizations have held fundraisers, and local suppliers like Ace Hardware, 84 Lumber and Your Building Center have given significant discounts.

“There’s just been this general outpouring of people to help work or donations of money so (the family) can help to pay to help equip the home so it’s accessible for Sylus,” added Fellman. “We’ve been sending thank you letters for everyone has done something. I know that there are future plans for fundraisers.”

A GoFundMe page that was created for Sylus and his family is still active, if anyone wishes to make a donation. People can visit www.gofundme.com/f/help-sylus-fellman-fight-mld to learn more.