Sign Up
Log In
Purchase a Subscription
You are the owner of this article.
Edit Article Add New Article
You have permission to edit this article.
Edit
Welcome, Guest
Home
News
Sports
Editorials
NIE
Obituaries
Opinion Line
Calendar
Daily Herald 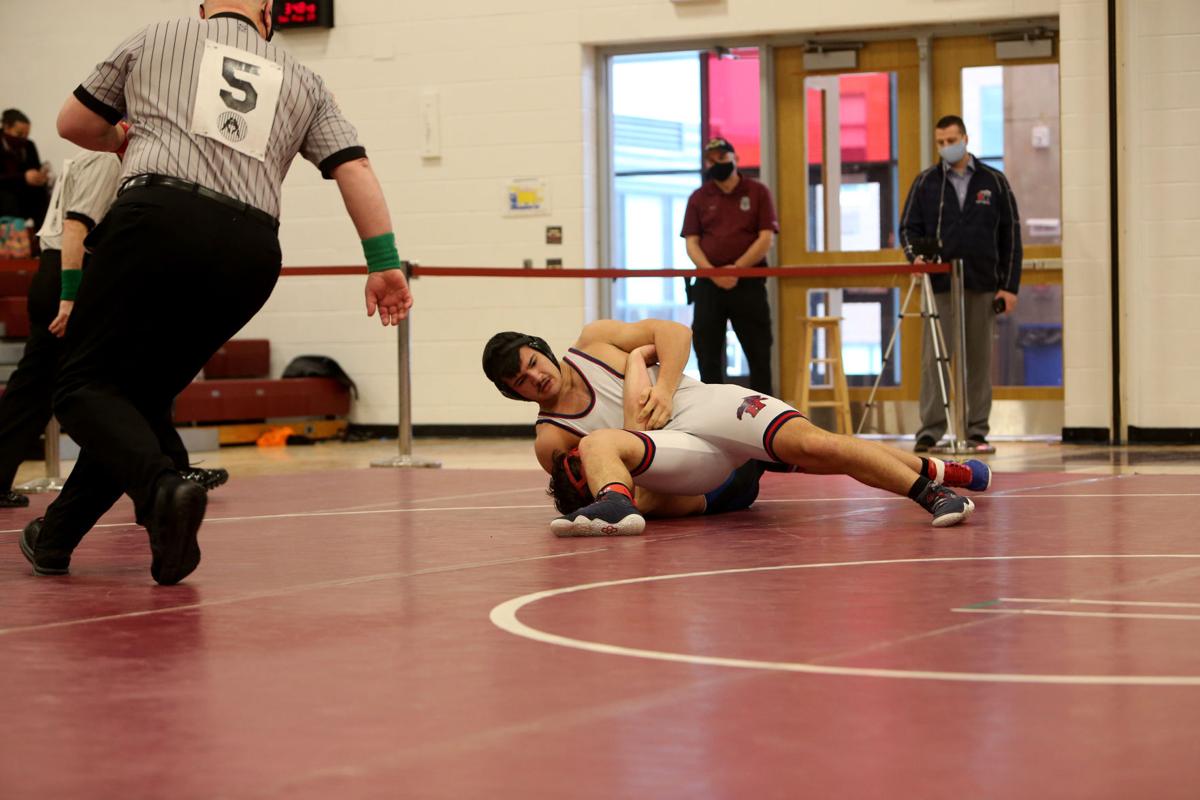 Huntingdon’s Briar Deline (215) caught Ethan Yingling of West Branch in a heading during their championship bout in the District 6-AA tournament at Altoona. Deline recorded the fall in 1:26 to claim his first district title. 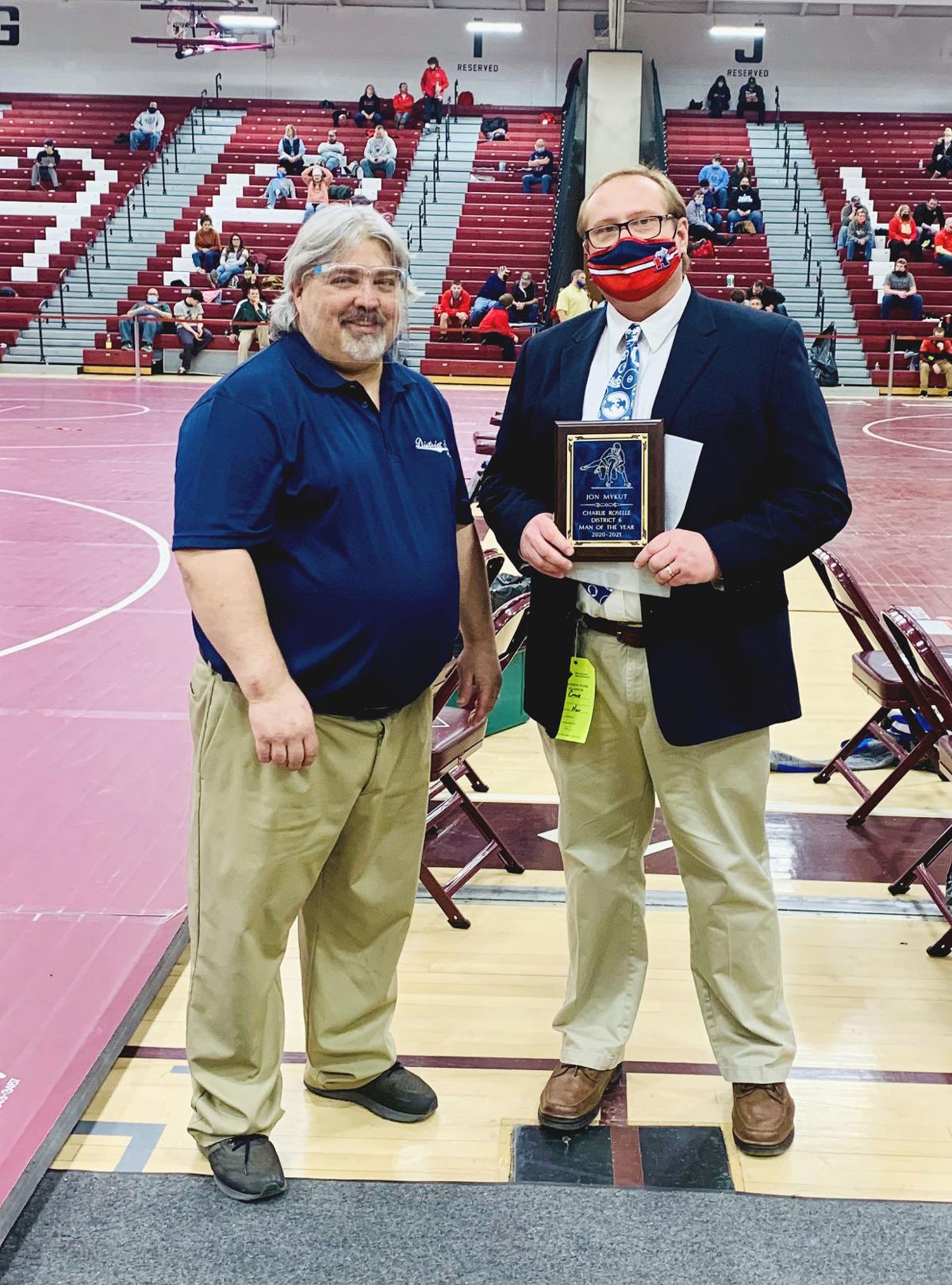 Huntingdon’s Briar Deline (215) caught Ethan Yingling of West Branch in a heading during their championship bout in the District 6-AA tournament at Altoona. Deline recorded the fall in 1:26 to claim his first district title.

Despite the forces of the universe conspiring against us, high school wrestling made it to the postseason. The COVID-19 pandemic necessitated changes to all the tournaments, but Huntingdon County’s four schools went to Altoona Saturday and were able to advance three competitors to the Southwest 2A regionals.

Huntingdon’s Briar Deline came away with the only District Six title among the locals. Teammate Myles Baney was a runner-up, and Bryce Beatty of Mount Union placed third.

The regional tournament will take place Saturday, Feb. 27 at Indiana University of Pennsylvania’s Kovalchick Complex. A Super Regional has been added after that, set for March 6 back at IUP. The state tournament is again in Hershey at The Giant Center March 12-13.

Deline is out to win as much as he can in his final season with the Bearcats. He placed eighth a year ago at districts. This year he won the Section 1 tournament and then three matches at 215 pounds to win the title.

“It feels amazing. I’ve been working for almost 10 years for something like this. It feels really good,” explained Deline.

The action started for Deline (11-1) by taking a 16-1 technical fall in 3:59 against Parker Moore of Philipsburg-Osceola. In the semifinals Deline won by fall in 2:36 over Westmont Hilltop’s Tanner Dluhos.

“It helped a little bit but at the same time they know what you’re going to do,” Deline commented about wrestling someone you’ve beaten before. “So you have to come up with a different game plan and come at it from a different angle. Find a new way to attack and how to defend what he’s going to do.”

Deline did all those things as he had no trouble in the championship match, pinning Yingling at the 1:26 mark.

Baney (8-4) finished second last year at districts and is a two-time state qualifier. He had to settle for runner-up again this year at 189 pounds.

The quarterfinals saw Baney win quickly in 56 seconds against Dominic Shaw of Philipsburg. Baney had some issues with his knee in the semis against Ethan Kubat of Central Cambria, but won a 6-4 decision.

Ian Eckenrode (13-0) of Cambria Heights stood in the way of winning a district title. After a scoreless first period, Eckenrode reversed for a 2-0 lead and kept Baney down through the second and third periods to win 4-0.

Beatty (10-1) didn’t wrestle at 113 pounds until the postseason started at the Section 1 tournament in Huntingdon. The Trojan senior reached 100 career wins this season and has since moved past Dave Grove, Thad Stewart, and Dylan Smith on Mount Union’s all-time win list.

Beatty was fourth at districts last year and did not make it to Hershey as he did his sophomore campaign. Beatty opened with a fall on Connor Lamantia of Westmont in 2:31. Trent Hoover (Penn Cambria) stopped Beatty 3-1 in the semifinals.

After a loss, Beatty seems to refocus and moved past Luke Uplinger of Central 16-0 in 3:41. A 13-4 major decision over Tony DiPaola from Forest Hills put Beatty in third place.

“He (Beatty) needed to get his offense going in the match he lost. It makes him a little angry and he comes back a little harder then,” Mount Union head coach Corey Wertz said.

Huntingdon sophomore Gunner Singleton (9-4) was the only competitor to reach the medal round. The heavyweight lost 5-0 in the quarterfinals to Brock Smeal of Glendale.

Singleton came back late to pin Chase Klinger of Philipsburg. A fall over Karter Quick of Central Cambria put Singleton against Smeal once more. Smeal scored his points in the second period and got the fall in 3:39.

Eden Wagner was the only other Bearcat to pick up a win on the day before being eliminated, defeating Issac Westrick of Cambria Heights 9-3. Landon Dunsmore, Devin Grubb, and Kyle Barnett each went 0-2.

Mason Beatty and AJ Chilcote both won one bout for the Trojans before bowing out. M. Beatty won in the quarters with a pin in 4:56 on Camden Stewart of Marion Center. Chilcote beat Hunter Gardner of Bald Eagle Area 7-3. Trevor Skopic and Deegan Rittenhouse both lost twice.

Juniata Valley was represented by senior Eli Morder. He stayed alive with a 12-0 major decision over Heath Basalla from Bald Eagle before exiting the tournament.

Huntingdon head coach Jon Mykut was named the District Six Man of the Year during a post-tournament award ceremony.